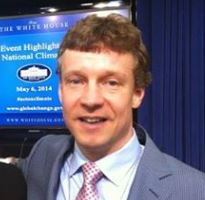 Jamie Herring is the founder and president of HabitatSeven, a new media lab dedicated to broadening the impacts of science research and education. An experienced multimedia and video producer, Herring has worked on projects for a diverse range of partners including Cornell University, the Bill & Melinda Gates Foundation, NASA, the White House, the United Nations, the Royal Government of Bhutan, and the Cree Grand Council. Recently, he has been focusing on climate science and the digital distribution of climate information and data. For example, he was the executive producer for digital strategy for the National Climate Assessment launched by President Obama in May 2014, and launched www.ClimateData.us in support of the White House’s Climate Action Plan. Among his current projects, Herring is the executive digital producer for an upcoming release of the Climate Resilience Toolkit’s climate data explorer, producing climate mapping applications in collaboration with NASA’s Ames Research Centre and NOAA’s Climate Division. He holds a doctorate from Cornell University, where he studied Natural Resources, Information Sciences, and Development Sociology.