Poverty in the United States and Other Western Countries

(May 2002) It is difficult to compare poverty levels in different countries. Countries not only have different currencies, they have different family income levels, consumption patterns, prices for goods and services (which affect purchasing power), spending patterns, and family and demographic characteristics. Different countries also adopt very different criteria for setting absolute income thresholds that define poverty. As a result, most cross-national studies use relative measures of poverty as a basis for comparison.

A recent study by Timothy Smeeding, Lee Rainwater, and Gary Burtless showed striking differences in western countries’ rates of relative poverty, which they defined as 50 percent of the median adjusted disposable personal income (ADIN) for persons (adjusted for family size). They also measured deep poverty, defined as 40 percent of the median ADIN. Using data from the Luxembourg Income Study, the researchers showed that the United States has the highest relative poverty (and deep poverty) rates among those countries observed (see figure).

Most European Women Use Contraceptives

(April 2001) Europe has the lowest fertility rates in the world. In 2000, the average for the region was 1.4 children per couple, and it ranged from 1.1 children in Bulgaria and the Czech Republic to 2.2 children in Albania.

Social scientists posit a number of explanations for Europeans’ apparent reluctance to have children. Many point to the rising costs of raising children — not just higher costs of living, but also the personal costs to parents of deferred professional advancement and individual fulfillment. Another explanation focuses on related changes in social expectations about marriage and family formation: Young Europeans may not feel the same social pressure to get married and have children as did their parents and grandparents.

The vast majority of European women of childbearing age use contraception — and Europeans are more likely than Americans to be practicing birth control. In most European countries, more than four out of five women of childbearing age who were married or in a marriage-like relationship were using a contraceptive method at the time of the survey. The use rates ranged from 92 percent in Hungary in 1993, to 66 percent in Lithuania in 1995 (see Table 1). A 1995 survey in the United States showed that three-quarters (75 percent) of currently married American women ages 15 to 44 were using a contraceptive method; 69 percent of formerly married American women were using a method.

* Currently married women ages 15 to 44. Note: The percentage is based on a sample of women of reproductive age who were in union and therefore exposed to the risk of pregnancy. The ages of respondents varied by country. Most surveys included women 20 to 45; some surveys also included slightly younger and older women.
Sources: Author’s calculations of data from the Fertility and Family Surveys; and J. Abma, A. Chandra, W. Mosher, L. Peterson, and L. Piccinino, “Fertility, Family Planning, and Women’s Health: New Data from the 1995 National Survey of Family Growth,” Vital and Health Statistics Series 23, no. 19 (Hyattsville, MD: National Center for Health Statistics, 1997): Table 42.

Most European women rely on highly effective contraceptive methods. Oral contraceptives are the most popular form of birth control; the pill is particularly dominant in Germany where it accounts for 84 percent of contraceptive use (see Table 2). Female sterilization, which rivals the pill as the top method in the United States, is not as popular in Europe. Sterilization was important only in Belgium, Spain, and Finland, where it accounted for 10 percent to 18 percent of use. 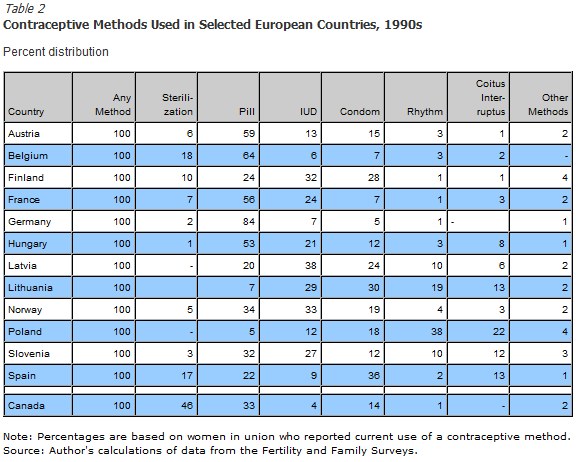 Surprisingly, traditional methods that have a relatively high failure rate are still widely used, especially in Spain and Eastern Europe. In Poland, more than one-third of women in a marital union reported using the rhythm method, while more than one-fifth said they used withdrawal. Rhythm (or periodic abstinence) and withdrawal (“coitus interruptus”) are the only forms of birth control condoned for married couples by the Catholic Church. This religious sanction might explain the higher use rates for these methods in countries like Poland and Lithuania that have large Catholic populations. Another barrier to the use of the pill or other “supply” methods in former Soviet countries, including Latvia, Lithuania, and Poland, was that the importation of contraceptives was often limited and many women did not have a reliable source of supply.

The efficiency of contraceptive methods used vary from country to country, in part reflecting the reliability of supply and consistency of use. Contraceptive failure is starkly reflected in measures of unwanted pregnancy. Nearly one-half of Latvian women and more than one-fifth of Hungarian and Spanish women pregnant at the time of the survey said they had not wanted their current pregnancy, or had wanted it at a later time (see Table 3). In France this share was 10 percent; in Finland, it was only 5 percent. In a 1995 survey in the United States, by comparison, about 9 percent of pregnancies were unwanted at the time of conception. A much larger share of pregnancies (21 percent) were “mistimed,” according to U.S. women interviewed. 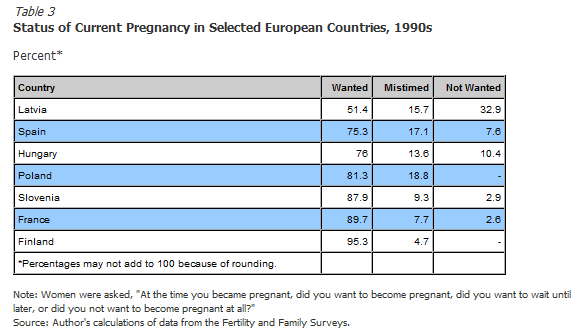 How can European women avoid unwanted pregnancies? Better information and education on reproductive health could help. Despite high levels of formal education, some women still have gaps in their knowledge about when they are fertile or how to use contraceptives effectively.

Ralf Ulrich is president of Eridion, GmbH, based in Germany.

Box
Collecting Information on Contraceptive Use in Europe

Until recently, there has been more information on contraceptive use and family planning in less developed countries in Asia, Latin America, and Africa than there has been in Europe. There have been several series of national surveys administered in less developed countries since the 1970s, fueled by the apparently urgent need for information about childbearing and family planning in countries where women had five to six children, on average, and where population growth was outstripping economic growth. The most recent and extensive effort is the Demographic and Health Survey (DHS) project, which involves more than 140 surveys in nearly 70 countries. But there has been less urgency about family planning behavior in Europe, where women appeared to have control over their reproductive lives and fertility was low. Only a few countries in the region conducted national surveys before the 1990s.

In the 1990s, a series of fertility surveys known as the Fertility and Family Surveys (FFS) were conducted in 24 more developed countries, primarily in Europe. The national surveys of 1,700 to 6,000 women (depending on the country) are an important source of information about contemporary patterns in the use of contraception in Europe. The questionnaires covered a broad range of problems related to fertility and family formation; many of the surveys also included a questionnaire for men. The minimum ages of respondents were not uniform, however. In most surveys, the ages of respondents ranged from 15 to 24 at the lower end, and from 40 to 49 at the upper end.

The design of the FFS benefited from the experiences with the DHS in less developed countries. Implementing the FFS questionnaires showed, however, that it was much more difficult to use standardized questionnaire modules in Europe than in the DHS countries. Consequently, FFS survey data on contraceptive use and other variables are less comparable than DHS data sets. Published individual country reports differ substantially in the way contraceptive prevalence is computed, but they provide a benchmark for further research into childbearing and family planning in Europe.