Trends in Life Expectancy in the United States, Denmark, and the Netherlands: Rapid Increase, Stagnation, and Resumption 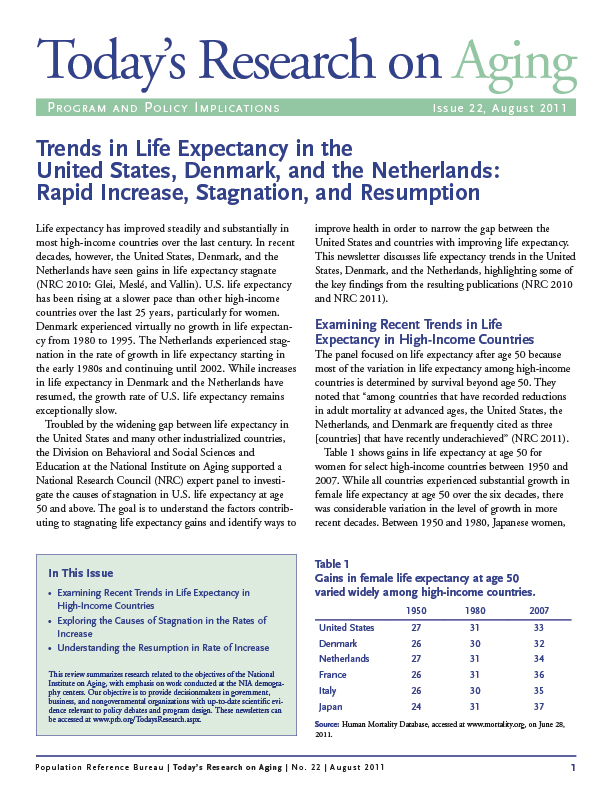 Today’s Research on Aging, Issue 22. Trends in Life Expectancy in the United States, Denmark, and the Netherlands: Rapid Increase, Stagnation, and Resumption

(February 2007) The Netherlands ranked at the top of 21 countries, followed by Sweden, in the United Nations’ first comprehensive assessment of child well-being in developed nations, which was released this month. Great Britain ranked at the bottom, just after the United States.

Child Poverty in Perspective: An Overview of Child Well-Being in Rich Countries, was published by the United Nations Children’s Fund (UNICEF) and included countries from the Organisation for Economic Cooperation and Development. The topic areas that formed the basis for the assessment included material well-being, health and safety, education, peer and family relationships, behaviors and risks, and young people’s ratings of their own well-being.

The authors acknowledged gaps in the data, especially on children’s mental health and emotional well-being; age and gender differences; and participation of 3- and 4-year-olds in early childhood education. They noted that no country ranked in the top third for all six areas, and called their report card “a broad and realistic guide to the potential for improvement in all OECD countries.”

The report is available at: www.unicef.org/media/files/ChildPovertyReport.pdf.