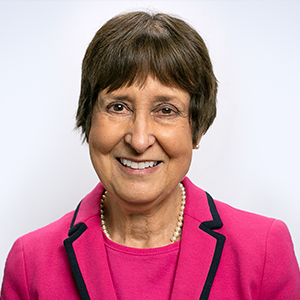 Elizabeth Schoenecker is a former chief of the Policy, Evaluation, and Communication Division of the Office of Population and Reproductive Health at the U.S. Agency for International Development (USAID). In that position, she led a team overseeing projects with combined annual expenditures of $85 million to $100 million. During her career at USAID, Schoenecker also served as a chief technical officer, designing and managing projects that provided worldwide assistance on policy formulation and analysis, data collection and analysis, advocacy and communication, and population-health-environment. She was also a Washington-based country coordinator for USAID’s Global Health Bureau, working closely with the USAID Missions in Philippines, Egypt, and Cambodia for 18 years. Prior to working at USAID, Schoenecker was an economist at the Department of Housing and Urban Development. She holds a master of science degree from Georgetown University School of Foreign Service and a bachelor’s degree in economics from Marquette University.