(October 2010) By 2008, Haiti’s largest microfinance organization, Fonkoze, was providing savings accounts or loans to 190,000 clients, mostly women, at its 39 banking offices in rural areas. But 2008 also presented challenges for Fonkoze’s clients, particularly for the poorest, many of whom do not know where they will get their next meal and often miss at least one meal a day. Prices of food had skyrocketed beginning in late 2007 due to drought in grain-producing countries and a spike in the cost of petroleum products used to produce fertilizers. Then, in the summer of 2008, Haiti was battered by four hurricanes in one month, destroying over half the country’s harvest. Many Haitians suffered from gangou klowox, an expression that describes their hunger as bleach burning in their stomachs. When a helicopter accessed an area of Fonkoze clients isolated by damage from the storms, dozens of severely malnourished children were found and had to be flown out for treatment.

When the earthquake struck Port-au-Prince in January 2010, the Fonkoze headquarters office was destroyed, five employees were killed, more than half had their homes seriously damaged or destroyed, and nearly 19,000 clients lost their business, their home, or both. Of the 41 branches in rural areas, nine were destroyed or critically damaged, but staff continued to operate programs in courtyards or from vans and were able to provide vital services to clients by keeping remittance payments flowing.

Anne Hastings is co-founder of Fonkoze; she has over 13 years of experience working with Haiti’s poor. When she learned in 2008 that the child of a Fonkoze client had died from malnutrition, her faith in her work was shaken. “I thought, ‘What if her loan had contributed to the problem? Was there the possibility that, despite our efforts, this woman’s loan had created problems for her? Could she have denied her child food in order to repay her loan?’,” Hastings recalls. The experience challenged her belief that microfinance provided the tools to help women make their way out of poverty. If she was wrong, could she continue working to build this bank that the poor could call their own?

But Hastings did not give up. Instead, she came to see microfinance in a new light: Fonkoze’s network of branches and women coordinators of borrowers were a platform that could be used to connect clients with health services for their malnourished children. The women’s groups that had developed over the years could be the leading edge in a new campaign to combat malnutrition. 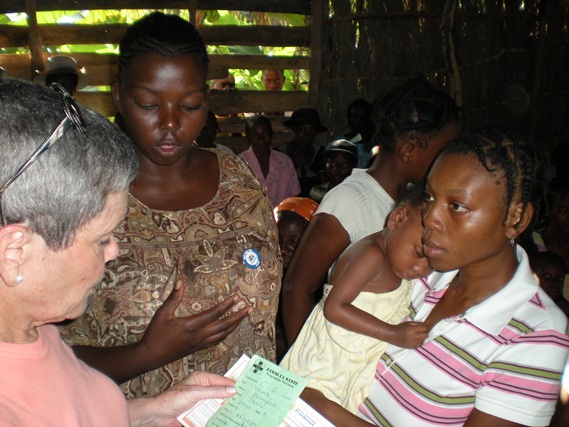 Anne Hastings, co-founder of Fonkoze (left), talks with a Fonkoze client and her child together with a center chief about the number of times she has gone to the clinic and the weight gain with each successive visit.

Across rural Haiti, Fonkoze borrowers had formed solidarity groups of five women who take out loans together. Between six and 10 of these groups are organized into credit centers, long-term associations of women committed to bringing themselves out of poverty. They work together to promote community development, and the groups receive training in literacy and business skills from Fonkoze staff. Each credit center is led by a center chief elected by the group. Fonkoze’s network includes 2,000 centers, and the center chiefs have been trained in leadership. “All we had to do was leverage this organization of women,” says Hastings. That was the starting point for a pilot program to detect and treat child malnutrition launched in late 2008.

The strategy for tackling malnutrition involves four steps. First, Fonkoze identifies health care providers to give treatment and administer food supplements to malnourished children, and connects the health care facilities with Fonkoze branch offices. Fonkoze then trains center chiefs to use a color-coded tape that detects malnutrition and measures its severity. Finally, Fonkoze creates educational and visual materials to present at meetings of the centers to show mothers how to feed children and keep them healthy with locally produced food.

The pilot program screened 106 children under age 5, and more than 35 tested positive for moderate or severe malnutrition. The diagnosis is painless: A UNICEF measuring tape is placed around the upper arm of a child, and the tape indicates whether the malnutrition is moderate or severe. Through a Fonkoze partnership with Zanmi Lasante (Partners in Health), all malnourished children were given free treatment at community-based outpatient clinics in the impoverished Central Plateau area.

The results were fast and dramatic. Within six months, malnutrition was eliminated among the group of ill children by providing them with a food supplement for six months at the clinic. A peanut-based supplement, known in Haiti as nourimamba, is produced locally. Another therapeutic food, Plumpy Nut, containing a peanut base and milk, minerals, and vitamins, is imported. A three-month follow-up treatment was offered by Partners in Health, during which Fonkoze taught the clients what types of inexpensive and locally produced foods—vegetables, beans, corn, and rice—make up a proper diet for their children.

The center chiefs were so enthusiastic with the speed of recovery that they wanted to measure all children in their area. The campaign “has a ripple effect which is exactly what we’re trying to do—to help center groups become development agents in the community,” says Carine Roenen, director of Fonkoze.
Partnering with other organizations was vital to the Fonkoze pilot’s success. The Partners in Health clinics are staffed with malnutrition specialists. Fonkoze has served as a distribution channel for pills donated by Vitamin Angels, a nonprofit supplier of vitamins; the deworming pill albendazole is provided by Planting Peace. In the past 12 months, over 683,000 multivitamins have been administered to more than 13,000 children, and 40,000 one-year doses of deworming medication have been distributed to Fonkoze clients and their children.

The pilot program got off the ground thanks to support from the Linked Foundation, a young philanthropy created five years ago dedicated to microfinance and health for women in Latin America and the Caribbean. Dorothy Largay, founder and CEO of the foundation, was so convinced by Anne Hastings and the strategic plan and benchmarks that she backed the program before it was launched. “I’m a strong proponent of the power of good leadership [and] I’m interested in the leverage and efficiency she is able to produce,” says Largay.

The Role of Center Chiefs

Center chiefs who are recognized for their leadership and maintain relationships of trust with Fonkoze clients in their locality are essential not only for diagnosing malnutrition but also for the delicate work of accompanying parents with their children to treatment centers. “When people are very poor and go to the hospital, sometimes they don’t get the right attention,” says Nicole Cesar Muller, health director with Fonkoze.

Forty-two center chiefs were trained with information about malnutrition and, using visual materials, they discuss the illness and treatment in a way that clients can comprehend. Most of the mothers are illiterate and, at first, are doubtful that their child is ill because their belief system tells them that sickness is caused by magic or casting of spells, and they usually seek help from a voodoo priest. “We convince them they have another way you can treat your malnourished child and, if you follow the treatments, the child gets better,” says Cesar Muller.

The cost of running the program is US50 cents per year per child treated. Those costs cover the health director and training of center chiefs; Fonkoze staff work to develop relations with partner organizations that participate in the program. 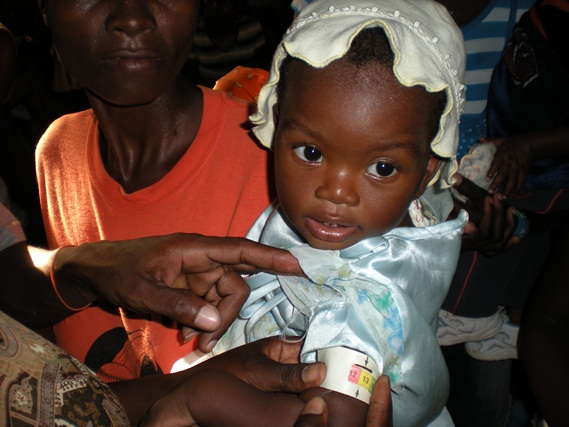 A child is screened for malnutrition using a simple color-coded tape measure. When it shows red, the child is severely malnourished.

Earthquake Damage, Scaling Up, and Next Steps

Fonkoze is redoubling its efforts to help clients recover from the earthquake through special financial arrangements that simulate a catastrophic insurance product that was being developed before the disaster. It is also continuing its client education, with a new module on risk management and disaster preparedness, and lending to small businesses of rural women that will provide them with income and help restart the economy. The institution has received funding to rebuild and expand its operations for special products targeted at alleviating poverty among Haiti’s rural poor.

The child malnutrition program was first scaled up to screen 1,000 children and provide treatment for 400 between December 2009 and June 2010. This second pilot program, funded by the SG Foundation, relied on the services of Partners in Health and other clinics in a wider area of the Central Plateau.
In the next two phases of the program, Fonkoze will introduce the malnutrition campaign to areas south of Port-au-Prince. The first step, based on a lesson learned from the success with Partners in Health, is to identify and establish working relationships with partners who can provide treatment. The program aims to screen 7,500 children, and connect about 2,500 malnourished children with partner clinics. Then, Fonkoze plans to widen the malnutrition campaign to other areas where its branches and center chiefs can work to screen 40,000 children and refer those needing treatment for care.

How such a program can be sustained financially and continue to expand is an ongoing question. Offering added services can benefit the microfinance institution itself by developing client loyalty and creating a strong image of responsibility for the community. In an environment where several microfinance institutions compete for clients, the added services can be the deciding factor for clients. “Fonkoze tries very hard to complement banking services, to add what is missing for the person as a whole to have some stability,” says Cesar Muller.

Lucy Conger is a writer based in Mexico City.