Addressing Limited Contraceptive Options and Inconsistent Use in Zimbabwe

Takudzwa S. Sayi has a Ph.D. in Demography from Princeton University. She was a participant in PRB’s 2014-2015 Policy Communication Fellows Program, funded by USAID through the IDEA Project. This working paper, written as part of the program, is based on the author’s research and does not necessarily reflect the views of PRB.

Between 2006 and 2011, fertility increased in Zimbabwe despite high and stable rates of contraceptive use relative to other sub-Saharan Africa countries. Contraceptive use rates remained constant during the 2006 and 2011 period, with more than 70 percent of all nonpregnant, sexually-active women using modern methods. Fertility nonetheless increased from an average of 3.8 to 4.1 children per woman during that time. The consequences of high fertility include unintended pregnancies and maternal deaths, which make it imperative to understand these puzzling patterns.

One explanation for the fertility rise in spite of ongoing high contraceptive use rates may be that the indicator typically used to measure contraceptive use only captures one point in time, missing women’s transitions in and out of different statuses (such as using no contraception, switching contraceptive methods, or being pregnant). The indicator also does not capture the range of methods women use, nor the rates at which women discontinue using contraceptives. Indeed, a recent study based on the 2010-11 Zimbabwe Demographic and Health Survey (DHS) found little variety in the methods used by Zimbabwean women.1 Additionally, a significant proportion of women discontinued use and did not switch to other methods although they did not wish to become pregnant.

Most Women Use the Same Few Contraceptive Methods; Almost 1 in 5 Discontinue

The study showed that about seven out of 10 nonpregnant, sexually-active Zimbabwean women were using contraceptives (see Figure 1). Among users, more than two-thirds used oral contraceptives (the pill). However, nearly one-fifth of women who began using a new contraceptive method and did not wish to become pregnant discontinued use within one year, while only a small percentage of them switched to different methods. Continuity of contraceptive use, however, is important to preventing pregnancies. 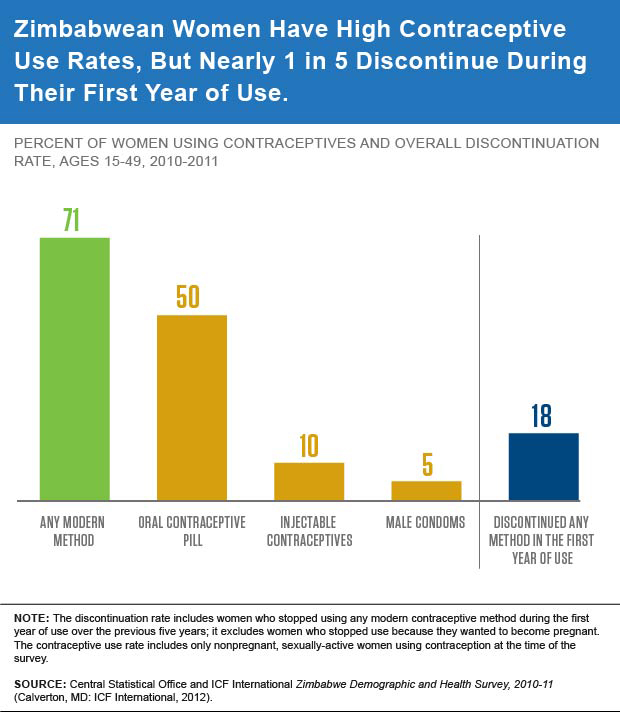 When examining contraceptive use by marital status, both married and never-married women tended to use a limited number of methods, although their rates of contraceptive use and preferred methods differed (see Figure 2). These differences persisted even after accounting for factors such as religion, education, age, residence, region, ethnicity, number of living children, and knowledge about their fertile period. 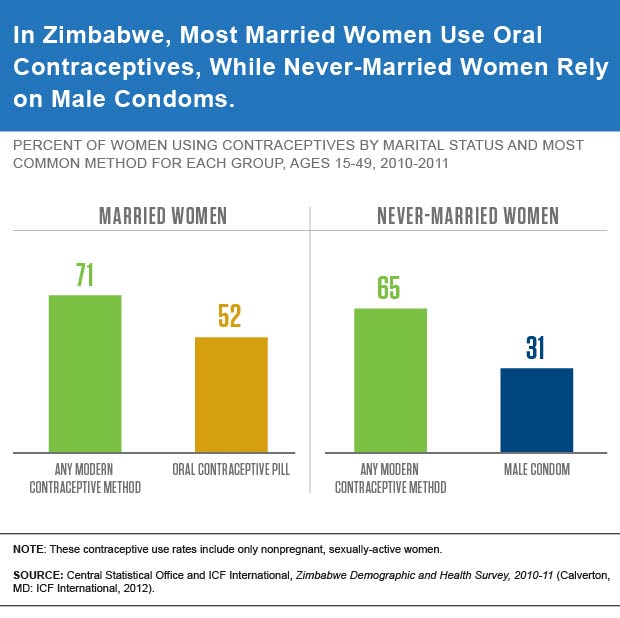 Nearly one-fifth of new pill users, comprising mainly married women, discontinued use within the first year, and only a small proportion of them switched to a different method within two months of quitting. Apart from desiring a child, the main reasons for discontinuing pill use were related to side effects, health concerns, and contraceptive failure. The 2010-11 Zimbabwe DHS suggests that a significant share of woman are unprepared to deal with side effects: About one-half of married contraceptive pill users reported that their providers did not tell them about side effects, offer them guidance on what to do if they experienced side effects, or discuss other methods they could use if the side effects became intolerable.2

Approximately one-third of women, consisting mostly of never-married women, discontinued use of male condoms within the first year. Most do not switch to other methods. Apart from desiring a child, the main reasons women reported discontinuing use of male condoms were infrequent sex and seeking a more effective method.

In order to prevent unintended pregnancies, it is important for reproductive health programs in Zimbabwe to address the contraceptive needs of all women—those who use contraceptives, those who do not use any contraceptive method, and those who have discontinued using contraception. Family planning interventions will be more effective if they are designed to meet the distinct needs of married and never-married women.