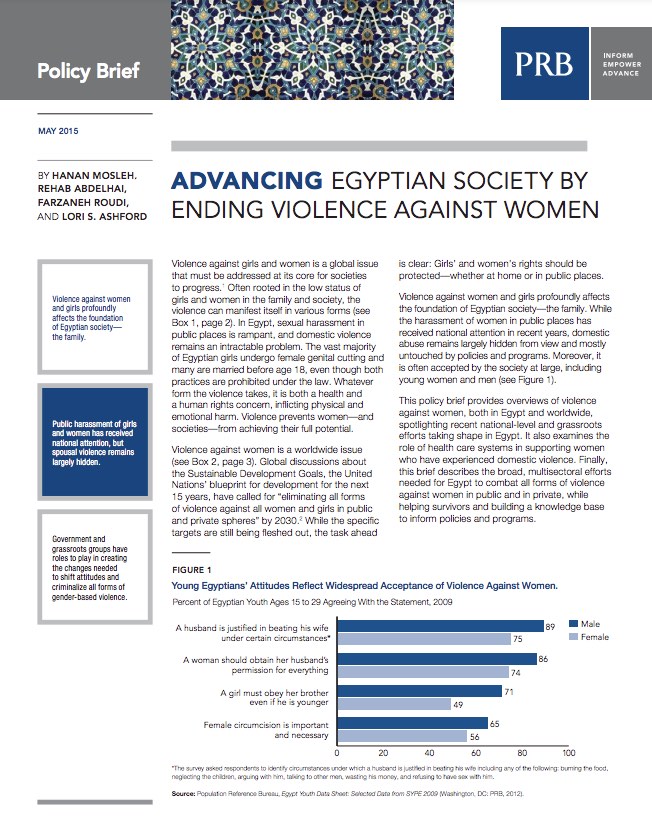 (June 2015) Violence against girls and women is a global issue that must be addressed at its core for societies to progress. Often rooted in the low status of girls and women in the family and society, the violence can manifest itself in various forms.

In Egypt, sexual harassment in public places is rampant, and domestic violence remains an intractable problem. The vast majority of Egyptian girls undergo female genital cutting and many are married before age 18, even though both practices are prohibited under the law.

While the harassment of women in public places has received national attention in recent years, domestic abuse remains largely hidden from view and mostly untouched by policies and programs. Traditionally, Egyptian culture, like other Arab cultures, has stressed the regulation of female behavior and has viewed men as responsible for protecting family honor by imposing control over their female family members. As a result, domestic violence is often seen as a family matter rather than a societal problem.

This report argues that for lasting change to occur, the government and civil society organizations must forge alliances to change the nation’s attitudes toward gender-based violence and meet the needs of survivors by working with families, the police, the judiciary, and health professionals in primary care settings and emergency rooms.