America's Diversity and Growth: Signposts for the 21st Century 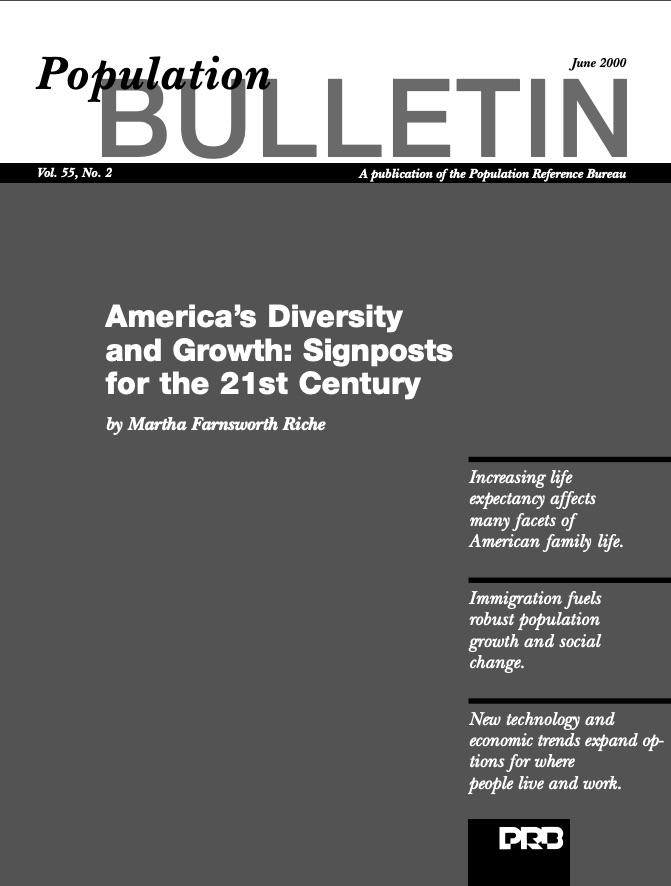 Population Bulletin, vol. 55, no. 2: America’s Diversity and Growth–Signposts for the 21st Century

(June 2000) At the beginning of the 21st century, demographic trends seem to many Americans to signal new, potentially disquieting changes in the U.S. population. Americans at the beginning of the 20th century also worried about unfamiliar developments in the population. Population trends inevitably reflect fundamental changes in the economy and in the world. Such changes influence peoples’ choices as they form families, seek economic and physical well-being, and move to places where they see opportunities. But viewed from the perspective of a century, population trends seem marked as much by stability as by change.

At the beginning of the 20th century, many Americans were concerned about slowing population growth, particularly because it meant that immigration was shifting the country’s ethnic balance. Then, as now, the United States was a nation of robust population growth fueled in part by immigration—but growth rates were lower than Americans has been used to, fertility was declining, and immigrants were coming from different countries than they had in the past. The story at the end of the century is similar. Population growth rates have slowed, although at least 2 million people are added each year. Once again large numbers of immigrants are coming from different places. And immigration plays a large part in population growth because U.S. fertility is low.

Geographic mobility within the United States has been another constant source of change over the last 100 years. Today’s Americans continue to move to better their circumstances. At the beginning of the 20th century, industrialization was propelling the growth of big cities, particularly in the Midwest and Northeast. By mid-century, there was a large-scale population shift to what become known as the Sun Belt, while people all over the country moved from city centers to suburbs. By the end of the century, advances in communications and transportation technology allowed many Americans to realize a dream of small-town life engendered by images of safe and supportive communities from a century ago.

The U.S. population is significantly more diverse racially and ethnically now than it was in 1900. Contemporary immigrants from Latin America and Asia are joining the African Americans and American Indians who have always been a part of the U.S. population. These immigration trends are likely to continue as the less developed countries that send most immigrants experience an unprecedented surge in the number of young people in their population, thanks to improved child survival and high birth rates. Young adults in these countries, as elsewhere, have the greatest propensity to move, particularly when jobs are scarce at home. And many will seek jobs in the United States.

Racial and ethnic definitions are relatively fluid and depend in part on how people perceive themselves, and how they are perceived by the society in which they live. More unions between Americans and different racial and ethnic groups are resulting in more children of mixed racial heritage, for example, and it is impossible to predict how these children will choose to indentify themselves once they are grown. If race and ethnic definitions remain the same, and so do immigration, fertility, and moral patterns, minority groups will continue to grow faster than the nonminority population. According to current projections, non-Hispanic whites will make up barley one-half of the population by 2050 and will lose their majority status by 2060.

For individual Americans, the most important population trend of the 20th century may well have been the stunning increase in their life expectance. Combined with relatively low fertility rates over most of the century, the result is a new age profile for the population. In the 21st century, the nation’s institutions and expectations will have to adapt to a population in which there are roughly equal numbers of people in all age groups, rather than the old pattern in which there were many more young people than older people.

Longer life expectancy has had a significant effect on Americans’ family lives, because it extends the number of years people live after their children are grown. Now Americans spend less than half their adult life rearing children, compared with most of adult life for couples at the beginning of the 20th century. This change has important implications for women especially, as they are now free to “have it all,” sequentially, if no concurrently. It also allows for new, companionable relationships between adult children and still-active parents, before caregiving is called for at the other end of the life span.

In some ways, family patters at the end of the century are like those that prevailed at its beginning. Young people then were more likely to wait for marriage until they were fully launched into adult life, and significant numbers gave evidence of never marrying at all.

An important new trend in the closing decades of the century was the replacement of early marriage by cohabitation. Cohabitation also has become common for Americans between marriages. And, marriages now are more likely to end in divorce than from death. Nevertheless, the rising divorce rate that was a concern in 1900 seemed to have stabilized by the 1980s.

The prevalence of single-parent families is about the same at the end of the 20th century as it was at the beginning, but the reasons are very different. In the early part of the century, single parenthood was usually the result of death; in the latter part it was generally the result of choice by at least one parent.

For married parents, the longer average life expectancy has extended the years of married life after children were grown. Elderly parents (predominately women because of their longer life expectancy) became far less likely to move in with adult children, especially after 1950. This combination of social trends and mortality improvements have made two household types more common than the traditional married couples with children: married couples without children and people living alone.

Although many aspects of American life are similar at the beginning and end of the 20th century, one set of trends is very different. In 1900, the United States was still largely an agricultural economy, although one in which industrialization was well underway. By the end of the century, the United States had become largely a service economy, although one in which manufacturing still plays an important part. The American population has responded to this shift with continual improvement in its educational attainment. At the beginning of the century, literacy (generally considered four years of schooling) was the principal educational benchmark. At the end of the century, a high school diploma has become the benchmark, and increasing shares of the population acquire college degrees.

Economic rewards are greater, too, especially for Americans with post-secondary education. As they did at the beginning of the century, women now have about the same opportunity as men to attend college. And, civil rights programs begun in the 1960s opened new doors to minorities. The combination of a broader range of job opportunities and acceptance of more women and minorities in the work place had granted a wider array of Americans economic success. But it has left many behind, including people who have jobs but earn so little that they are officially poor.

Martha Farnsworth Riche served as director of the U.S. Census Bureau between 1994 and 1998.