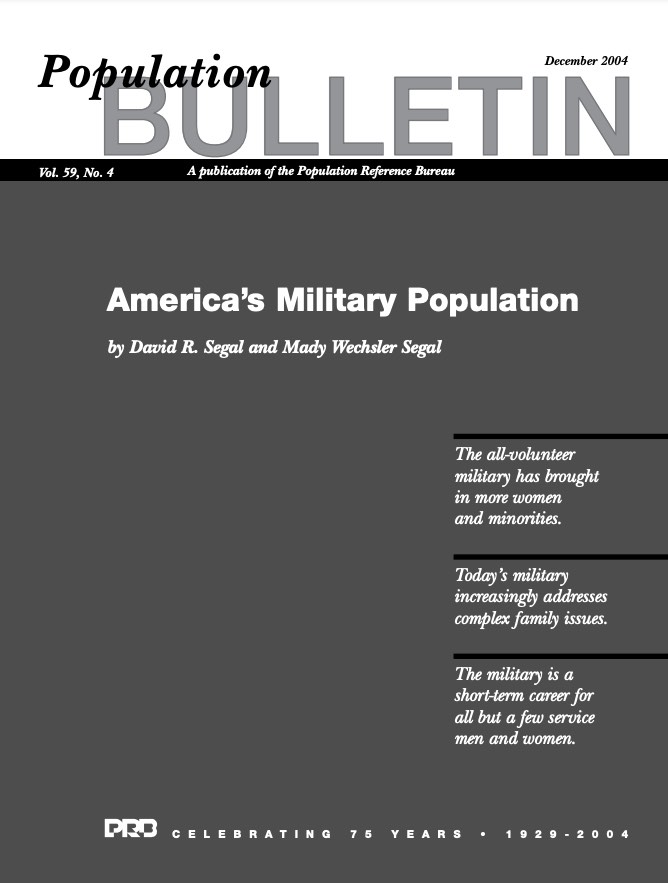 (December 2004) The American military has been viewed as a form of national service, an occupation, a profession, a workplace, a calling, an industry, and a set of internal labor markets. Military service has touched most American families; nearly 26 million Americans living today have served in the military—24 million of these veterans are men, 12 million are over age 60. But today’s active-duty military is very different from the military of 30 and 50 years ago, when the military relied on the draft for personnel and warfare required more troops. The all-volunteer military is more educated, more married, more female, and less white than the draft-era military. And debates about the future size, structure, and composition of the U.S. military have assumed new prominence in the political landscape, especially as the country faces new security threats. Today’s military is also grappling with such social issues as the inclusion of gays, the role of women, the wellbeing of military families, and the transition back into civilian life. The specter of a new military draft—although unlikely to occur—has generated congressional activity and has grabbed the attention of young Americans. Such issues did not concern Americans for most of U.S. history, but are common today.

This Population Bulletin will focus on these issues with regard to the 1.4 million active-duty uniformed personnel currently serving in the four military branches of the U.S. Department of Defense (DoD) and their 1.9 million dependents. This Bulletin addresses core demographic issues regarding the military population. Demography is the study of the size, distribution, and composition of a population, and focuses on such population processes as fertility (additions to the population), mortality (subtractions from the population), and migration (population mobility). This report examines the size, distribution, and composition of the American military population, plus additions to (recruitment), departures from (retirement and other separations), and mobility of that population through reassignments.

The armed forces did not become a major institutional presence in the United States until the 20th century and did not become a major factor in the American occupational structure and labor force until the last quarter of that century. The United States was founded with a militia tradition of citizen-soldiers, and a cultural aversion to the excesses of the peacetime standing army of England’s King James II. A national army was raised during the American Revolution, but in 1783, after the United States won independence, the Congress discharged the Continental Army that had defeated the British, except for 80 soldiers retained to guard the military stores at West Point and Fort Pitt, plus a proportionate number of officers, none above the rank of captain. This congressional action set a precedent for a military force, composed exclusively of men, that was to be mobilized during wartime through calling up the militia, recruiting volunteers, and occasional conscription, and was to be demobilized during peacetime. This pattern persisted until the mid-20th century.

David R. Segal is Distinguished Scholar-Teacher, professor of sociology, director of the Center for Research on Military Organization, faculty associate in the Maryland Population Research Center, and faculty affiliate in School of Public Policy at the University of Maryland.

Mady Wechsler Segal is Distinguished Scholar-Teacher, professor of sociology, associate director of the Center for Research on Military Organization, and faculty affiliate in the Women’s Studies Program and in the School of Public Policy at the University of Maryland.