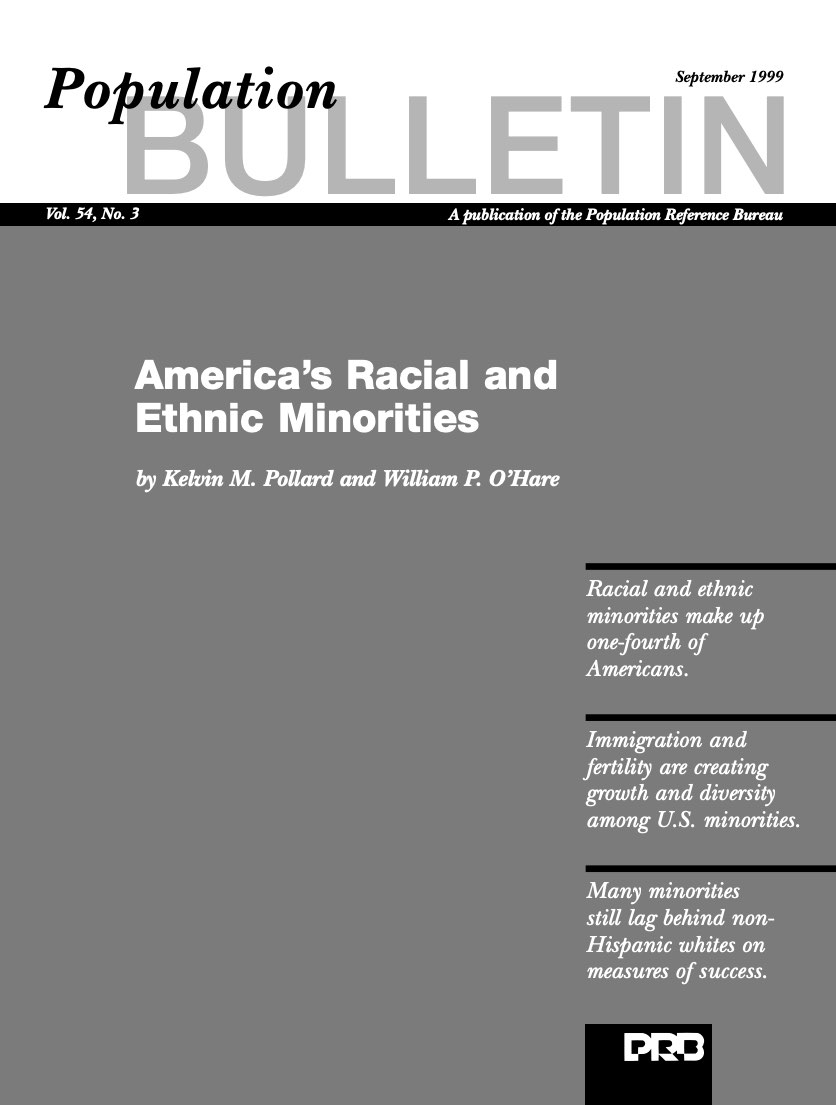 The 20th century has witnessed the transformation of the United States from a predominately white population rooted in Western culture to a society with a rich array of racial and ethnic minorities. As the century began, the U.S. population was 87 percent white. The nonwhite minority was composed primarily of black Americans living in the rural South. At the century’s end, non-Hispanic whites account for less than 75 percent of the U.S. population. The minority population is comprised of nearly as many Hispanics as blacks, surging numbers of Asians, and a small but growing American Indian population. By the middle of the 21st century, non-Hispanic whites will make up a slim and fading majority of Americans. Hispanics will be nearly one-fourth of the U.S. population. Blacks, Asians, and American Indians together will make up close to one-fourth of the population. “Minority” is likely to have a very different meaning in the 21st century.

This transformation of America’s racial and ethnic profile is most visible in certain states and communities. The four minority groups make up at least one-half of the residents in Honolulu, Los Angeles, Miami, San Antonio, and several other metropolitan areas. Within 25 years, California, Hawaii, New Mexico, and Texas will be “minority majority” states in which minorities will be more than one-half the population. But many parts of the country have little racial or ethnic diversity. Minorities make up less than 5 percent of the populations of Maine, New Hampshire, Vermont, and West Virginia, for example.

Minorities have also become more diverse socioeconomically. The number of minorities in the highest income brackets has more than doubled since 1980, for example, yet minorities still account for a disproportionate share of the poor. More minority politicians are being elected to public office, but minorities are more likely than non-Hispanic whites to serve time in prison. More minorities are earning graduate and professional degrees, yet a disproportionately large percentage never finish high school.

The growth of the African American, Hispanic, Asian, and American Indian populations is profoundly changing the racial and ethnic makeup of the country’s schools, workplaces, and neighborhoods, and it is creating a new multiracial and multicultural heritage in the United States. Many businesses target their products to specific minorities because they recognize that minorities are an expanding market. Aspects of black, Hispanic, Asian, and American Indian culture—including art, food, music, and styles of dress—are being adopted throughout American society.

Americans are divided in their beliefs about the long-term effects of the growing diversity. Some see the rapid growth of minorities as a key to the revitalization of America and a logical continuation of the “melting-pot” tradition. Others see the rapid increase in racial and ethnic minorities as an unwelcome departure from America’s European heritage. Discussions on this topic sometimes become heated because the increase in the minority populations is closely linked to important policy issues relating to immigration, affirmative action, welfare, and education reform.

Opinion polls also show that many white Americans believe that racial discrimination no longer impedes the advancement of minorities. Yet numerous studies document continued discrimination against racial and ethnic minorities in employment, housing, criminal arrests and prosecutions, and many other sectors of society.

Although the transition to a multiethnic America is moving at a rapid pace, it is occurring remarkably smoothly. But occasionally tensions build and erupt into serious confrontations. In the 1990s, Americans have witnessed racial riots in Los Angeles, the burning of African American churches in the South, and the murders of a Filipino postal worker in California and of a black man in Texas.

Hate crimes against minorities, especially African Americans, reportedly increased in the 1990s. Yet such confrontations are rare and involve far fewer people than the violence among racial and ethnic groups in many other countries. Hate crimes and blatant racism directed against immigrants have been widely reported in Western Europe in recent decades as these countries received an influx of economic migrants and political refugees. During the last decade of the century, ethnic and religious differences have led to massacres of ethnic Tutsis by Hutus in Rwanda; full-scale war involving Serb, Bosnian, Albanian, and other ethnic groups in the Balkans; and violence against ethnic Chinese in Indonesia.

To the rest of the world, the United States is a grand and daring experiment. No other country has so successfully blended so many people of different races and cultures. At a time when racial and ethnic rivalries are promoting violence around the globe, how Americans handle their transition to a multiracial society has implications that extend far beyond U.S. borders.

If the United States can avoid a violent clash of cultures, the country can benefit from its growing diversity. A multicultural, multiethnic America has a competitive advantage in the global economy. The United States is geographically positioned to serve the growing Latin American market to its south, its traditional European market to its east, and the burgeoning Asian market to its west. America’s increasingly multicultural population can enhance its ability to prosper in the new global marketplace. With ties to all the regions of the world, America’s racial and ethnic minorities can help American businesses understand the needs and preferences of people in other countries.

This Population Bulletin offers readers a chance to see how America’s racial and ethnic groups compare with one another across a host of demographic dimensions. As Americans reassess their view of the nation and its future, they will no doubt express contradictory views and arrive at different positions on public policy issues. Resolving those differences will be easier if Americans understand the current demographic reality of U.S. minority populations.