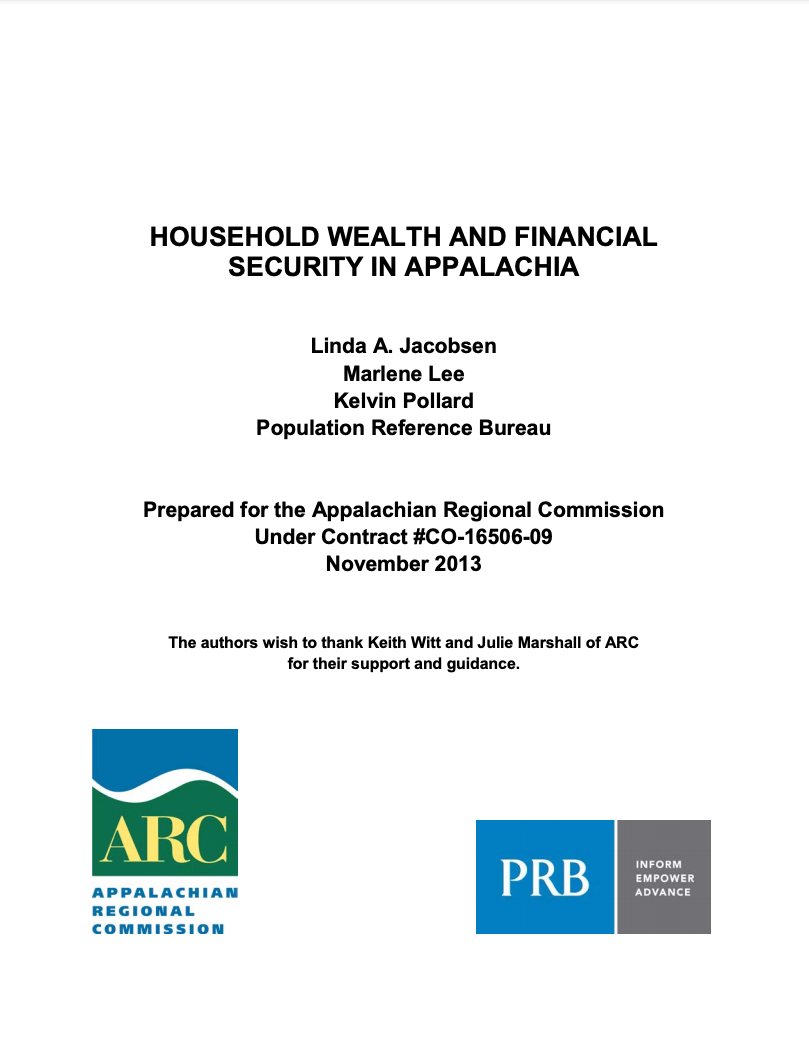 In 2007, with the onset of the deepest economic recession in the United States since the Great Depression, Americans lost jobs and experienced sharp declines in the value of their homes and investments. Decreases in household wealth affect not only individual and household financial security, but also community and regional economic prosperity and growth. Given the history of economic difficulties in the Appalachian region, the Appalachian Regional Commission commissioned the Population Reference Bureau to analyze the effects of the recent recession on household wealth and economic well-being in Appalachia and to assess whether Appalachia has been disproportionately affected by the economic downturn.

The Appalachian region covers 205,000 square miles along the Appalachian Mountains from southern New York to northern Mississippi, including parts of 12 states and all of West Virginia.

Using data from the 2000 Census (1999 data for income) and the Census Bureau’s American Community Survey for the period from 2005 through 2011, the report, Household Wealth and Financial Security in Appalachia, examined changes in indicators of household wealth and economic well-being for Appalachian counties, subregions, county types, and economic status categories; analyzed the most current (2007-2011) indicators of household wealth and economic well-being in Appalachia to assess the degree of recovery from the recession; and identified how closely county differences in housing value are associated with county differences in economic status.1

During the recent recession, the Appalachian region did experience a disproportionate decline in median household income and an increase in the poverty rate, compared with the United States as a whole. However, although homeownership rates and average home values did decline in Appalachia, these declines were not as steep as for the rest of the nation. In contrast, the share of homeowners spending more than 30 percent of their income on housing (the average spending on housing for the country) increased in Appalachia. And both the share of households with interest and other nonwage income and the average amount of such income declined more in Appalachia than in the rest of the United States.