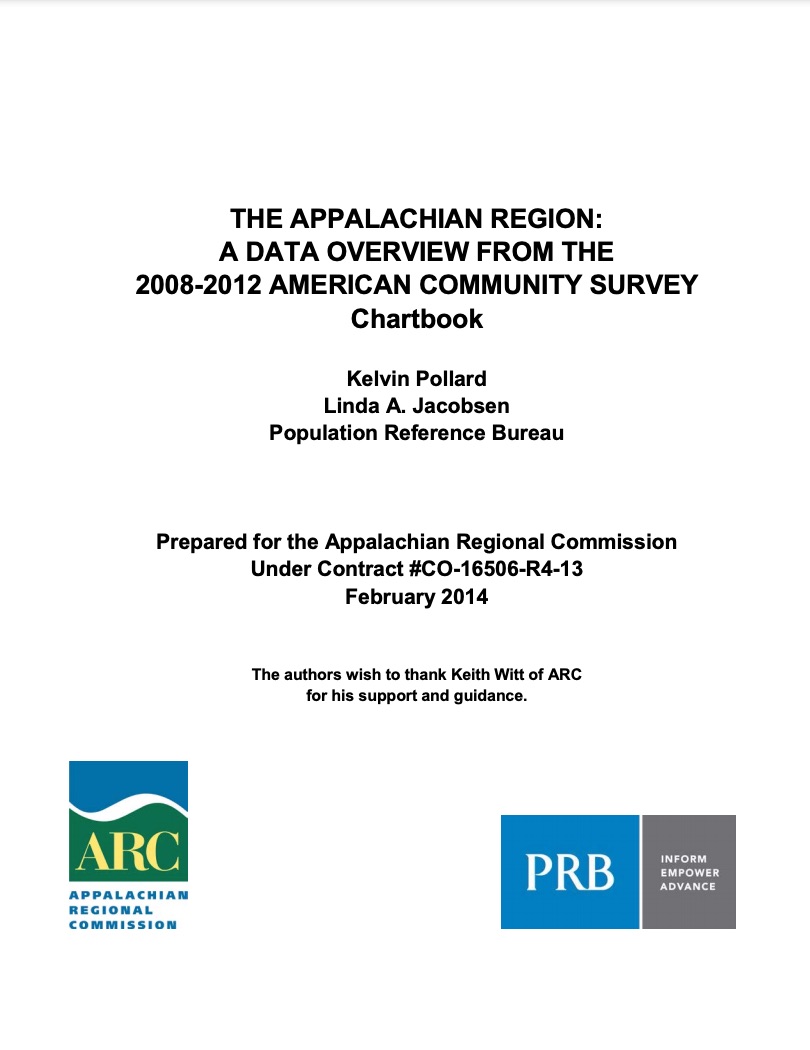 Chartbook. The Appalachian Region: A Data Overview from the 2008-2012 American Community Survey

Appalachia’s residents remain older and have a higher disability prevalence than Americans as a whole, but overall demographic, health, and socioeconomic patterns vary widely within the region, according to The Appalachian Region: A Data Overview From the 2008-2012 American Community Survey, prepared by the Population Reference Bureau for the Appalachian Regional Commission.

The report also found that Appalachian residents had income and educational attainment levels that were below those for the nation. For example, at $43,600, median household income in the region was lower than the national median of $53,000. And 23 percent of working-age adults (ages 25 to 64) in Appalachia had at least a bachelor’s degree—the U.S. average was 30 percent. Homeownership, on the other hand, remained more common in Appalachia than in the rest of the country; nearly 72 percent of the region’s housing units were owner-occupied, compared with 66 percent for the U.S. as a whole.

This report also contains chapters on health insurance coverage in the region, disability status, and veteran status of the adult civilian population.

The Appalachian region covers 205,000 square miles along the Appalachian Mountains from southern New York to northern Mississippi, including parts of 12 states and all of West Virginia: a total of 420 counties. This report—co-authored by Kelvin Pollard, PRB senior demographer, and Linda A. Jacobsen, PRB vice president of U.S. Programs—finds that this region’s population has continued to grow: The latest population estimates indicate the region had 25.4 million residents in 2012 (out of 314 million Americans nationwide), compared to 25.2 million in the 2010 Census.

During the 2008-2012 period (a period of both economic decline and slow recovery), 18 percent of Appalachia’s prime working-age population (ages 25 to 64) were not covered by health insurance, slightly below the U.S. average of 19 percent. But the uninsured varied greatly by region: one-fifth of 25-to-64-year-olds in Central, Southern, and South Central Appalachia were uninsured. By comparison, northern Appalachia accounted for 56 of the region’s 68 counties where less than 15 percent of the working-age residents were uninsured.

Also during this period, 16 percent of Appalachia’s working-age residents reported having a disability, higher than the U.S. average of 12 percent. The American Community Survey defines disability as having difficulty in at least one of the following areas: hearing, vision, cognition, walking or climbing, self-care, or attending to the functions of independent living. Disability prevalence was particularly high in some parts of the region; the rate was 20 percent or more in 133 counties, nearly half of which were in Central Appalachia. The region’s relatively high disability rate corresponds to the population’s older age structure: In 112 of the Appalachian counties with the highest disability prevalence levels, at least 14.3 percent of the residents were age 65 or older.

The report also identifies the region’s adult civilians who were veterans (men and women who served on active duty in the U.S. Armed Forces, the National Guard or Reserves, or in the U.S. Merchant Marine during World War II). In the Appalachian region, slightly more than 10 percent of adult civilians were military veterans in 2008-2012, slightly greater than the U.S. rate of 9 percent. The prevalence was even higher in some counties: In 57 counties, at least 12 percent of civilian residents were veterans. Conversely, the veteran prevalence rate was lower than the national average in 121 counties.