Are Imams in Egypt Prepared to Help Stop the Spread of HIV/AIDS? 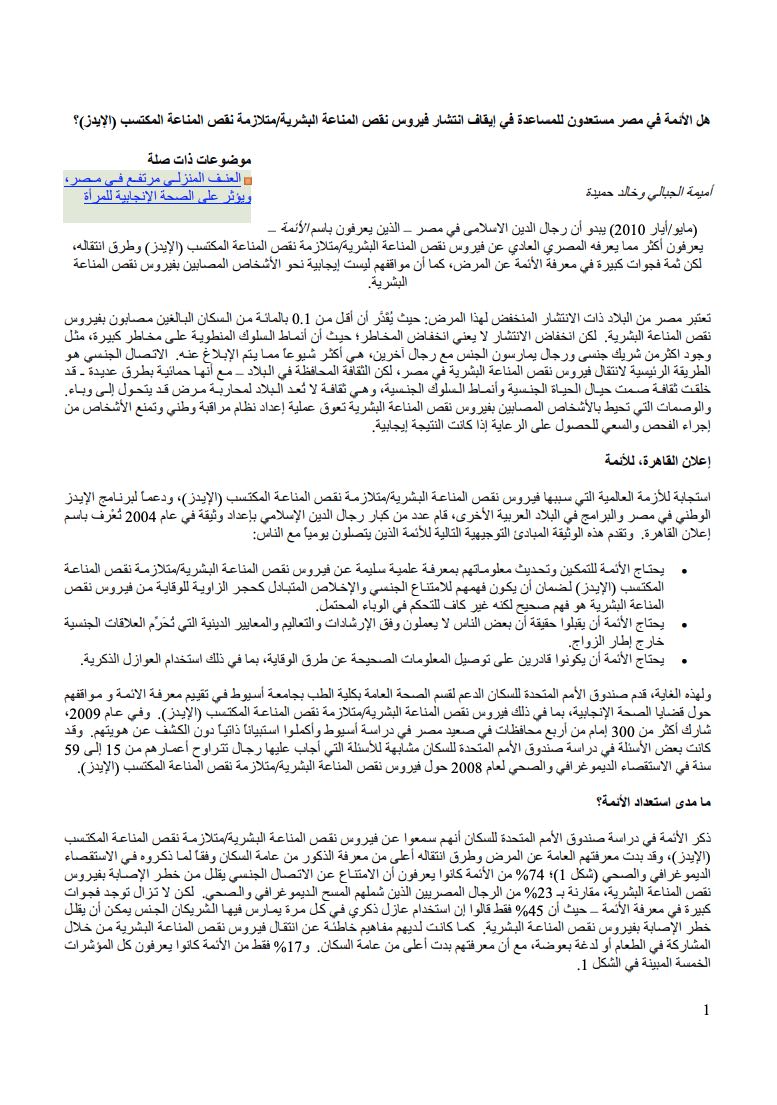 Report. Are Imams in Egypt Prepared to Help Stop the Spread of HIV/AIDS? (Arabic)

(May 2010) Muslim religious leaders in Egypt—known as imams—appear to know more than the average Egyptian man about HIV/AIDS and its modes of transmission; but there are major gaps in imams’ knowledge about the disease, and their attitudes are not favorable toward people living with HIV.

Egypt is a low-prevalence country: It is estimated that less than 0.1 percent of its adult population is HIV-positive. But low prevalence does not mean low risk; high-risk behaviors, such as having multiple sexual partners and men having sex with men, are more common than reported. Sexual intercourse is the main mode of HIV transmission in Egypt, but the country’s conservative culture—though protective in many ways—has created a culture of silence about sexuality and sexual behaviors that does not prepare the country for battling a disease that can potentially turn into an epidemic. Stigmas surrounding people living with HIV obstruct the development of a national surveillance system and prevent people from being tested and seeking care if the result is positive.

In response to the global HIV/AIDS crisis and in support of Egypt’s National AIDS Program and programs in other Arab countries, high-ranking Muslim clergies produced a document in 2004, known as the Cairo Declaration. The document offers these guidelines for imams who have day-to-day contact with people:

To that end, the United Nations Population Fund (UNFPA) supported Assiut University’s Faculty of Medicine and Department of Public Health to assess the knowledge and attitudes of religious leaders about reproductive health issues, including HIV/AIDS. In 2009, more than 300 imams from four governorates in Upper Egypt participated in the Assiut study and completed a self-administered, anonymous questionnaire. Some of the questions in the UNFPA study were similar to questions that men ages 15 to 59 answered in the 2008 Demographic and Health Survey (DHS) about HIV/AIDS.

How Ready Are the Imams?

Imams in the UNFPA study reported having heard about HIV/AIDS, and their general knowledge about the disease and its modes of transmission appeared to be higher than that of the general male population reported in the DHS (Figure 1); 74 percent of the imams knew that abstaining from sexual intercourse reduces the risk of getting HIV, compared with 23 percent of Egyptian men surveyed in the DHS. But still there were major gaps in the imams’ knowledge—only 45 percent said that using a condom every time a couple have sex can reduce the risk of HIV. They also had misconceptions about transmission of HIV from sharing food or from a mosquito bite, although their knowledge seemed to be higher than the general population. Only 17 percent of the imams knew about all five indicators shown in Figure 1.

Sources: Fatma El-Zanaty and Ann Way, Egypt Demographic and Health Survey 2008: and UNFPA, Knowledge, Attitudes
and Practices of Religious Leaders on Reproductive Health/Gender Issues in the Context of Islam (forthcoming).

Although the imams’ attitudes toward people living with HIV/AIDS were not favorable, their attitudes were more favorable than the DHS survey respondents (Figure 2). Only 37 percent agreed that a HIV-infected teacher should continue teaching; 45 percent are willing to care for a relative with HIV/AIDS at home; and 73 percent would not want the HIV status of a family member to remain secret. But overall, only 14 percent of imams reported an accepting attitude toward people living with HIV on all three indicators.

Sources: Fatma El-Zanaty and Ann Way, Egypt Demographic and Health Survey 2008: and UNFPA, Knowledge, Attitudes
and Practices of Religious Leaders on Reproductive Health/Gender Issues in the Context of Islam (forthcoming).

Imams Are Key in Combating HIV/AIDS

In Egypt, changing people’s behavior and perceptions must involve imams who are respected role models and can openly encourage positive behaviors. Imams in Egypt appear more knowledgeable than the general male population, but they still need to improve their knowledge. While 72 percent of the imams in the UNFPA study said that they talk with people about HIV/AIDS in their Friday sermons or other occasions, only 8 percent reported having received training on HIV/AIDS.

Training imams in Egypt is a huge challenge; more than 50,000 imams need information on a culturally sensitive topic that deals with difficult issues such as sexual orientation, sexual health, and condom use. But the sooner the imams are trained, the more lives and resources will be saved.

Omaima El-Gibaly is professor of public health and Khaled Hemeyda is assistant lecturer at the faculty of medicine at Assiut University in Egypt. This article presents some of the key findings of their UNFPA-funded research on the preparedness of imams to take a role in prevention and control of HIV/AIDS in Egypt.

“The Cairo Declaration of Religious Leaders in the Arab States in Response to the HIV/AIDS Epidemic” (December 2004).

UNFPA, Knowledge, Attitude and Practices of Religious Leaders on Reproductive Health/Gender Issues in the Context of Islam (forthcoming).