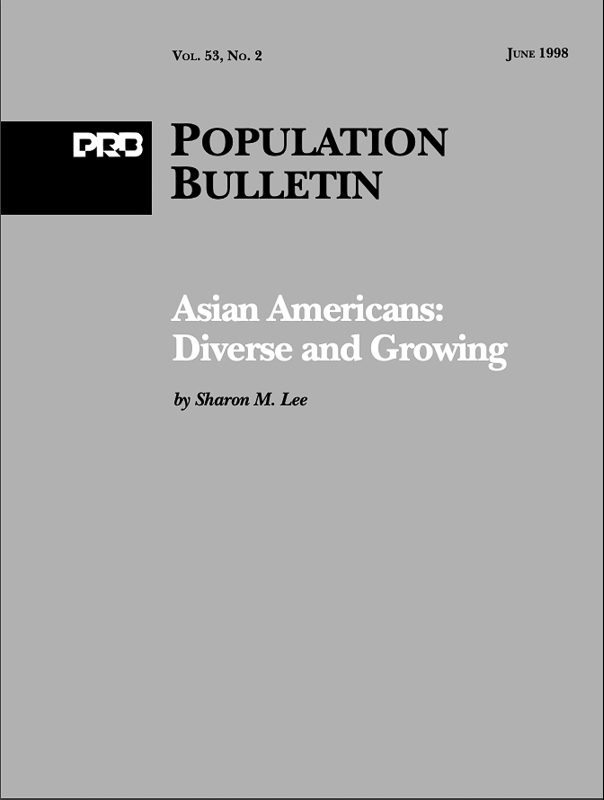 (June 1998) The Asian American population is growing at a breathtaking pace. Their numbers nearly doubled between 1980 and 1990 and are likely to double again by 2010. The estimated 9.6 million Asian Americans in 1997 make up less than 4 percent of the total U.S. population, but their influence on U.S. society is accentuated by their geographic concentration in a handful of states and cities and their above average income and educational levels.

While the history of Asians in the United States has been marked by racial prejudice and discrimination, Asian Americans today are entitled to the same rights as other U.S. residents and citizens, and they work in a wide range of occupations. Many are active in politics and hold high elected offices. Their high average educational attainment, occupational status, and household incomes appear to negate the idea that they are a disadvantaged minority. But Asian Americans’ ethnic and socioeconomic diversity also appear to contradict the common stereotype of Asians as a “model minority” that succeeds through hard work and strong family values. Asian Americans still experience racial prejudice in various forms and of various levels of intensity.

Immigration has fueled the dramatic growth of the Asian American population. Almost 70 percent of the U.S. Asians counted in the 1990 Census were either immigrants who came to the United States after 1970 or the children of these immigrants. About 20 percent of the 1997 population arrived after 1990.

Immigrants from Asia represent more than one-third of all legal immigrants admitted to the United States in recent years, which places Asian Americans in the center of the debate over immigration reform. The rapid expansion of the Asian American population in recent decades has been accompanied by a remarkable ethnic diversification. In 1970, 96 percent of Asian Americans were Japanese, Chinese, or Filipino. As the 21st century approaches, these three groups make up just over 50 percent of Asian Americans. Asian Indians, Koreans, and Vietnamese now outnumber Japanese Americans. The number of Asian ethnic groups recognized in publications based on the U.S. census has grown from four to 13 since 1970, and now includes Cambodians, Pakistanis, and Thais, among others.

This Population Bulletin examines three major issues created by the rapid growth and diversification of the Asian American population: the social status and position of Asians in the United States; Asian Americans’ search for an identity amidst increasing ethnic and socioeconomic diversity; and the demographic impact of Asian Americans on the U.S. population. This Population Bulletin will address these issues by examining the growth and demographic characteristics of Asian Americans, including their geographic concentration, age structure, fertility rates, household characteristics, and socioeconomic indicators such as education, employment, and income.

Sharon M. Lee will join the sociology department at Portland State University in fall 1998 as an associate professor after nearly 10 years at the University of Richmond.

Population Bulletins are a signature PRB product that distill complex demographic data and social science research to provide the most objective and accurate population information in an accessible format useful to researchers, advocates, journalists, government decisionmakers, and others.