Benefits From Integrating Family Planning Into Other Development Sectors

(February 2014) Increasingly, development workers, program planners, and donors are recognizing the benefits of integrating family planning (FP) with other sectors. More research is needed, however, on the effectiveness of multisectoral programs. Three recently completed projects integrating FP into development activities outside the health sector provide evidence of efficiency and effectiveness. These examples highlight how an integrated, multisector approach can improve FP access in tandem with other development goals including environmental sustainability, food security, and poverty reduction.

The FHI 360 PROGRESS project (2008 to 2013) partnered with three projects already working in agriculture, microfinance, and environmental conservation to expand their model to include FP information and services and to collect data on activities and outcomes. Evaluations of these interventions found that integrating FP into other development projects is “feasible, acceptable, and effective.” PROGRESS then summarized their findings in the report, Integrating Family Planning Into Other Development Sectors. Below are excerpts from the report (reprinted with permission from FHI 360 PROGRESS).

The Kenya Dairy Sector Competitiveness Program, implemented by Land O’Lakes International Development, worked with local dairy cooperatives to integrate a health camp into the regular “farmer field days” for their cooperative members and others in the community. At the suggestion of stakeholders, the health camps offered various health services beyond FP, but focused on women’s health. FP services consisted of information and counseling; provision of oral contraceptives, injectables, and condoms; and referrals for long-acting methods. Other services available included child immunizations, antenatal care, screening and treatment for sexually transmitted infections, HIV counseling and testing, treatment of minor illnesses, and referrals.

More than 80 percent of the 2,344 attendees at the field days received health consultations. The most frequently received services were general physical examinations (66 percent), FP services (18 percent), and HIV counseling and testing (14 percent). Seventy-three percent of those receiving services were women.

All 18-to-49-year-old women who received any health services at the field day were invited to participate in a survey that included questions about their contraceptive history, the field day health camp model, and the package of services offered at the camps. Of the 319 women who were interviewed, the majority were married (76 percent) and poor (80 percent in the lowest two wealth quintiles). About half of these women had no more than a primary school education, and only 40 percent were affiliated with a dairy cooperative.

Of the 319 women who participated in the survey, 206 were married, not pregnant, and able to have children. Eighty-one percent of these women were currently using a modern contraceptive method, and 25 percent of the contraceptive users reported having received additional supplies of condoms, pills, or injectables at the health camp. Sixty percent of the women received FP information.

Of those who were married and not pregnant, 32 (15 percent) had an unmet need for contraception, meaning they did not want to have a child in the next year but were not currently using contraception. None of the women with an unmet need initiated a modern method of contraception during a field day health camp, although four were referred to health facilities to receive methods that were not available at the field day. These results suggest that field days appear to be more effective in supporting women to continue their contraceptive use than encouraging uptake among those not using contraception. Supporting continuation is important in Kenya, however, where the 2009 Demographic and Health Survey found that 36 percent of family planning users discontinue their contraceptive method within 12 months of starting its use.

Attitudes toward the health camps were positive, with 83 percent of the women surveyed reporting that that they preferred receiving services at the field day to their health facility. The health camps successfully built on existing agricultural programming to provide needed health services to many women, without detracting from the dairy-related activities. The health camps can be used as a model for other organizations looking to bring health services to rural communities by partnering with existing events in other sectors.

Microfinance programs can be excellent partners for FP programs because they often work with poor individuals who may not have access to FP information and services, but are motivated to improve their lives. Microfinance programs have regular contact with small groups, particularly women’s groups, allowing for reinforcement of key concepts and building of trust between volunteers and program beneficiaries. PROGRESS worked with the Network of Entrepreneurship and Economic Development (NEED), a microfinance agency in Uttar Pradesh, India, and the Institute for Reproductive Health/India to develop a program to strengthen the FP information provided through Village Health Guides (VHGs) to microfinance self-help/joint-liability groups (SHG/JLG).

The outcome of this intervention suggests that the provision of FP messages and referrals by the VHGs was associated with a substantial increase in FP use over a relatively short time—seven months. The chart below shows that use of modern methods of FP in the intervention group increased from 34 percent to 39 percent, a statistically significant increase. Reported use of all methods of FP increased from 40 percent to 69 percent, largely due to an increase in women reporting the use of periodic abstinence/rhythm as a FP method. During the intervention, the unmet need for FP (women who are sexually active, do not wish to become pregnant, and are not using a FP method) declined from 42 percent to 12 percent.

The intervention also benefited from the integration itself. Because the VHGs address other health topics, they are not perceived as solely FP promoters, raising their standing in the community and allowing them to better respond to individual needs. In addition, integrating with the existing microfinance program as well as with existing FP activities in the area both reduced the cost of the intervention and increased its sustainability after the research was concluded.

Increase in Family Planning Use Among Cohorts 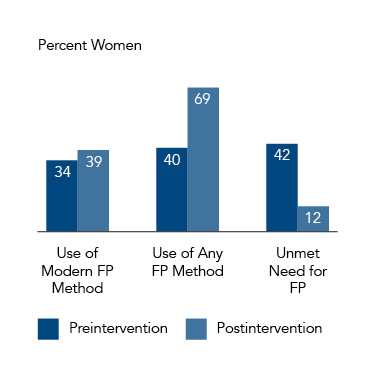 The GVs received training to share messages about the links between environment, health, and population (EHP), and then educated the community about these links and the benefits of FP. Trained GVs delivered EHP messages in their regular meetings with Tree Nursery Groups and organized public events to educate the community.

Follow-up assessments indicate that the GVs acquired and retained adequate knowledge to teach the community about the relationship between family size and the health of families, communities, and the environment. Of the 42 trained GVs, 81 percent correctly answered at least seven out of 10 questions on essential FP knowledge eight months after the intervention began. Most GVs reported favorable attitudes about the added responsibility of promoting FP and all said they were interested in continuing these activities.

The community also reported positive reactions to the integration. Participants in all of 16 focus groups affirmed that GVs promote healthy timing and spacing of pregnancies, and in all but one group, participants thought GVs were credible in discussing FP. The focus groups also expressed that EHP community education exposes more men to FP messages, reportedly allowing couples to talk more freely about their FP choices, and motivating some women and men to seek FP services as a couple. All focus groups indicated that the EHP activities had a positive impact on FP-related knowledge and behaviors, and that they shared their new FP knowledge with others. In all but one group, participants reported knowing someone who sought FP services as result of GVs’ discussion of EHP.

More information and implementation tools from PROGRESS are available on the project page.

Evidence from PROGRESS confirms that integrating FP into nonhealth-sector development projects can be an effective way to facilitate access to FP and other health services and information for women and communities. These nonhealth-sector projects are often operating in communities that have great need for health services, and participants are likely to be receptive to messages about FP. Development organizations focused on sectors outside of health can also benefit from partnering with FP groups because FP education and services support a variety of broad development goals, including women’s empowerment, sustainable livelihoods, and healthy families. PROGRESS assessed just a few models for integrating FP services into other sector programs, but there are now many examples of FP integration into multiple types of development work. Visit the K4Health toolkit for more information on integrated Population, Health, Environment approaches, and Google for a map of integrated Population, Health, Environment worldwide.