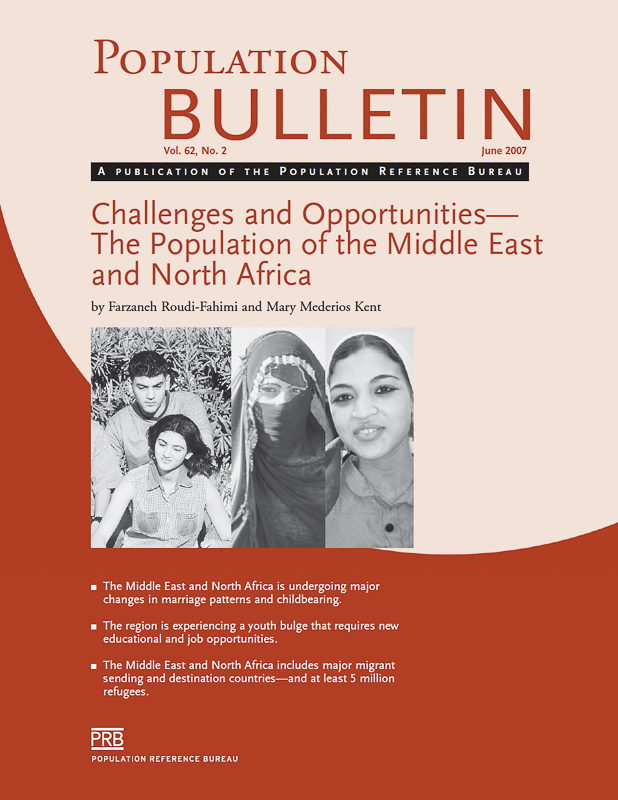 Population Bulletin, vol. 62, no. 2: Challenges and Opportunities—The Population of the Middle East and North Africa

(June 2007) The countries of the Middle East and North Africa (MENA) continue to fascinate and concern the rest of the world. With two-thirds of the world’s known petroleum reserves, the region’s economic and political importance far outweighs its population size. Yet, its demographic trends—especially the rapidly growing youth population—are beginning to attract notice as well. In 2007, the MENA region has about 432 million people, making it one of the least populous world regions (see figure). But rapid population growth rates—second only to sub-Saharan Africa—caused MENA’s population to quadruple since 1950, and will propel its total to 700 million by 2050, exceeding the population of Europe in that year. This continuing growth is complicating the region’s capacity to adapt to social change, economic strains, and sometimes wrenching political transformations.

While the region embraces religious and cultural tradition, there has been a veritable revolution on many fronts. Just a few decades ago, lilliteracy rates were quite high for women in many MENA countries. Women often married before age 20, and they rarely worked outside the home. Now, women are attending school and beginning to enter the labor force. Couples are waiting longer to marry and are deciding to have fewer children. Child and maternal health have improved, leading to longer life expectancies and plummeting infant mortality rates in many countries.

The trends toward later marriages and smaller families are translating into impressive fertility declines throughout the region. All but a few countries, such as Yemen, have seen substantial reductions in the fertility rates within the past two decades. While the fertility rates are still high enough—and the childbearing population still large enough—to fuel substantial future growth, the recent sharp fertility declines have produced an increasingly notable youth bulge. One in every three people living in the region is between ages 10 and 24.

This large crop of young people needs jobs and training—in a region currently plagued by high youth unemployment. While the youth bulge offers a potential demographic dividend—a temporary surge in the proportion of working-age adults that can boost economic growth—there are many obstacles to reaping this windfall. High unemployment, a mismatch of jobs and skill levels, extensive government entitlements, and political instability are among the factors that have made it difficult for the young MENA population to spur economic growth. In addition, citizens must compete with foreigners for jobs in some Persian Gulf countries where one-half or more of the labor force consists of foreign workers.

Whether these young people become healthy and productive members of their societies will depend on how well governments and civil societies invest in social, economic, and political institutions that meet their needs. The fastest growth in the youth population will be in places that are the least prepared economically: Iraq, the Palestinian Territory, and Yemen.

While the youth bulge and concomitant demands on the labor force, educational, housing, health, and other social systems are garnering more attention now, other demographic trends will continue to affect the region. As the youth bulge reaches prime family-formation age in each country, the number of births is likely to increase, fueling considerable future growth. The population on the Arabian Peninsula is projected to double to 124 million by 2050. Iraq and the Palestinian Territory will more than double in size. Iran and Turkey are slated to have about 100 million people each. In North Africa, Egypt will continue to dominate demographically, with a population exceeding 120 million.

As MENA’s total population increases, so does its elderly population and with it the demands for health care and financial security. The elderly will remain a small share of the total population, especially compared with Europe, where one-third of the population will be age 60 or older by 2050, according to recent UN projections. But the numbers entering the older ages will continue to expand. Between 2000 and 2050, Egypt’s population ages 60 and older is expected to grow from 4.6 million to 23.7 million. Egypt’s elderly will account for nearly 20 percent of the total population, compared with just 7 percent in 2000. Saudi Arabia’s elderly population is expected to grow from fewer than 1 million to 8.1 million over the same period, with the percent age 60 or older rising from 4 percent to 18 percent.

Regardless of the level of economic development or national income, the prospect of larger populations in the future means that governments are increasingly challenged to provide the basic needs for a growing numbers of citizens—adequate housing, sanitation, health care, education, and jobs. These same challenges face many of the world’s countries, but they are compounded in a region that is both politically volatile and short of water. Yet wise investments in today’s youth, particularly in girls, can yield potentially large payoffs for MENA’s future development.