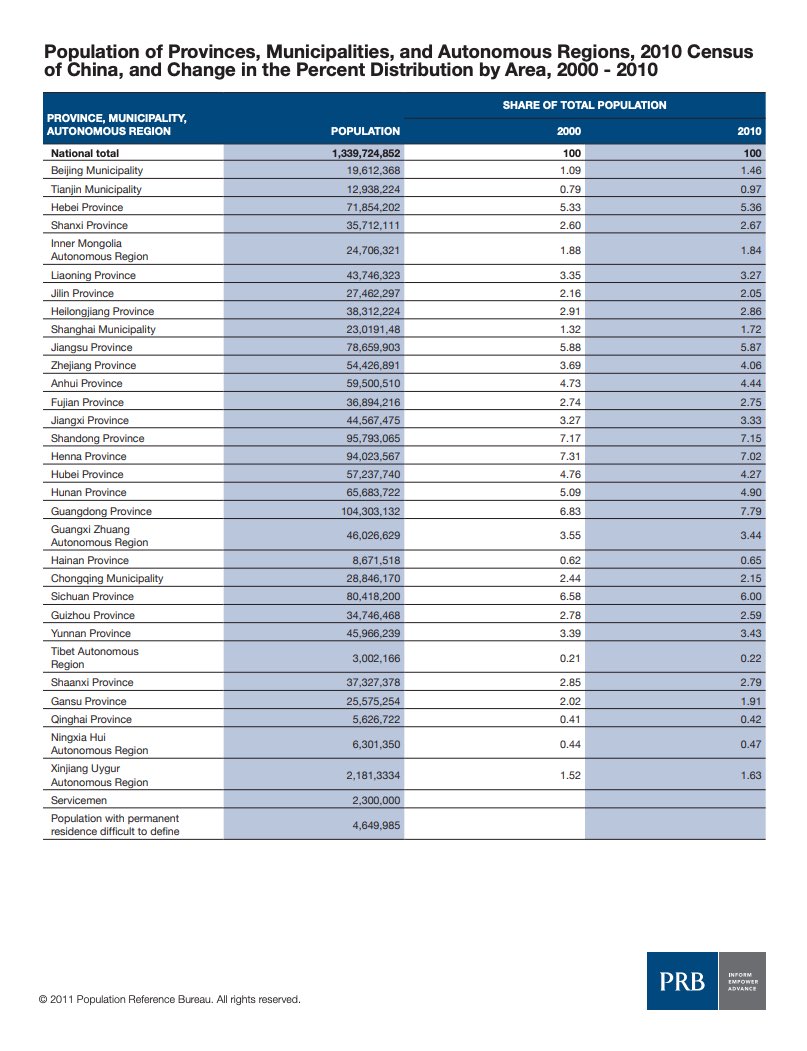 (May 2011) China, the world’s only other “demographic billionaire,” along with India, released the results of its Nov. 1, 2010 Census on April 28. It took 10 million census workers to carry out the huge exercise, roughly equivalent to the entire population of Belgium. The total population count was 1,370,536,875, however, that includes 7,097,600 in the Hong Kong Special Administrative Region (SAR), 552,300 in the Macao SAR, and 23,162,123 in Taiwan, the Republic of China (China claims Taiwan as one of its provinces).1 For mainland China, the count was 1,339,724,852.2 Mainland China is the entity normally listed in population statistics, consisting of “31 provinces, autonomous regions and municipalities, and servicemen of the mainland of China.” A post-enumeration survey estimated a census undercount of 0.12 percent. The count was 73,899,804 higher than the 2000 Census figure, an increase of 5.8 percent.

It is always interesting to compare China’s population figures with other countries. The population addition between 2000-2010 is equal to the present population of Turkey. This can also be compared with the number added to India’s population between its 2001 and 2011 Censuses—181 million—more than twice the amount added by China in 10 years. India’s population is quickly gaining on China; its population is expected to pass China’s sometime after 2020. China’s annual rate of population growth between censuses was 0.57 percent, while India’s was 1.6 percent from 2001 to 2011. Will this be the last census that shows China as the world’s most-populous country? The National Population and Family Planning Commission has steadfastly denied that there will be any national relaxation in its one-child policy (actually more of a “1.5” child policy when exceptions to the rule are factored in), but the future of the policy is unclear. China is concerned about the aging of its population, leading to widespread speculation that the policy may have to change.

The overall sex ratio of the population, which was 106.7 in 2000, decreased to 105.2 in 2010 despite the fact that the reported sex ratio at birth is quite high at about 119 males to 100 female births (the standard ratio is about 105 males to 100 females since biologically there are about 5 percent more male births worldwide than female). The preference for sons has skewed the sex ratio at birth in favor of males, a problem the country has been addressing. Reflecting migration from rural areas, the urban population rose by 207 million from 2000 to 2010, while the rural population dropped by 133 million. In 2010, the urban proportion of the population was 50 percent. Overall, 20 percent of the population lived in a different place than six months before the census. The number of those changing towns or cities rose by 81 percent over 2000.

Population of China by Age and Sex, Mid-2010

One of the more dramatic changes in China’s demographics is the drop in the percentage below age 15, a change that was expected. In 2010, 17 percent of the population was in the 0-to-14 age group, down from 23 percent in 2000. The share in the age group 65 and over rose from 7 percent in 2000 to 9 percent in 2010. The change in the older age group was less dramatic than that of the younger group but, as seen in the population pyramid, the pace of aging will soon be more rapid. The pyramid uses the current estimate of age and sex from the U.S. Census Bureau’s International Programs Center, an estimate that will likely be similar to the official census age-sex structure when it is released.

China’s age structure is far from smooth, having seen a series of swings in its birth rate over the years, a result of such traumatic periods as the Great Leap Forward in 1958, whose effects lasted for several years, and the Cultural Revolution from 1966 to the mid-1970s.

According to the census, 92 percent of the population is of the majority Han nationality and the remainder are made up of China’s many minority groups. The Han nationality increased by 6 percent between the censuses while the minorities rose by 7 percent. Compared with the 2000 Census, 9 percent of the population had a university education (junior college and above), up from 4 percent in 2000; those with senior secondary education, including technical schools, rose to 14 percent from 11 percent; those with junior secondary education increased to 39 percent from 34 percent; and those with primary education only declined to 27 percent from 36 percent. Clearly, China is improving the educational attainment of its population rather quickly. Illiteracy, as reported in the censuses, dropped to 4 percent from 7 percent in 2000.

The 2010 Census paints a picture of a country whose low birth rate of about 1.5 children per woman has resulted in profound changes to its pattern of aging, a process that will accelerate in the coming years. It also shows a population whose educational levels are rising and one that is moving from the rural farmland to urban centers where employment opportunities increase with each passing year.