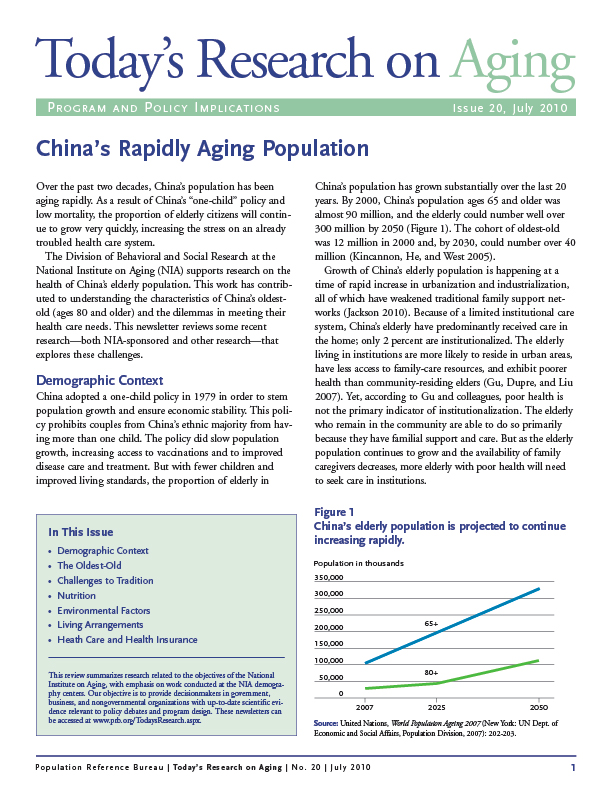 Over the past two decades, China’s population has been aging rapidly. As a result of China’s “one-child” policy and low mortality, the proportion of elderly citizens will continue to grow very quickly, increasing the stress on an already troubled health care system.

The Division of Behavioral and Social Research at the
National Institute on Aging (NIA) supports research on the
health of China’s elderly population. This work has contributed
to understanding the characteristics of China’s oldest-old
(ages 80 and older) and the dilemmas in meeting their
health care needs. This newsletter reviews some recent
research—both NIA-sponsored and other research—that
explores these challenges.

China adopted a one-child policy in 1979 in order to stem
population growth and ensure economic stability. This policy
prohibits couples from China’s ethnic majority from having
more than one child. The policy did slow population
growth, increasing access to vaccinations and to improved
disease care and treatment. But with fewer children and
improved living standards, the proportion of elderly in
China’s population has grown substantially over the last 20
years. By 2000, China’s population ages 65 and older was
almost 90 million, and the elderly could number well over
300 million by 2050 (Figure 1). The cohort of oldest-old
was 12 million in 2000 and, by 2030, could number over 40
million (Kincannon, He, and West 2005).

Growth of China’s elderly population is happening at a
time of rapid increase in urbanization and industrialization,
all of which have weakened traditional family support networks
(Jackson 2010). Because of a limited institutional care
system, China’s elderly have predominantly received care in
the home; only 2 percent are institutionalized. The elderly
living in institutions are more likely to reside in urban areas,
have less access to family-care resources, and exhibit poorer
health than community-residing elders (Gu, Dupre, and Liu
2007). Yet, according to Gu and colleagues, poor health is
not the primary indicator of institutionalization. The elderly
who remain in the community are able to do so primarily
because they have familial support and care. But as the elderly
population continues to grow and the availability of family
caregivers decreases, more elderly with poor health will need
to seek care in institutions.