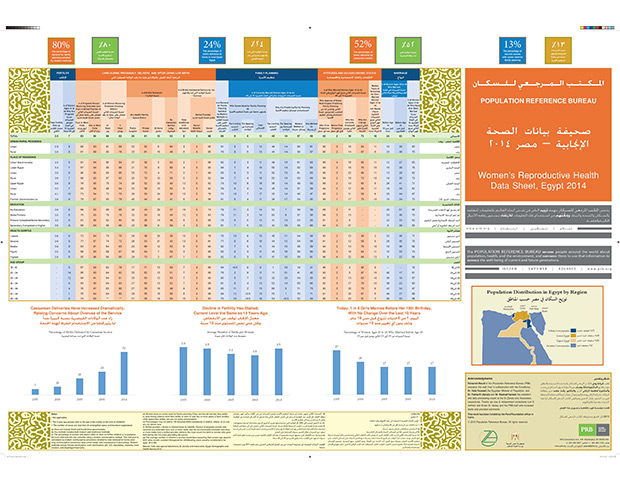 In the Women’s Reproductive Health Data Sheet, Egypt 2014, the Population Reference Bureau (PRB) and El-Zanaty Associates compiled the latest data available on women’s reproductive health in Egypt, broken down by location, education level, and other key categories. The 29 indicators provide measures for the following topics:

The percentage of women in Egypt ages 20 to 24 who married before age 18 has held steady over the past decade at 17 percent, according to the data sheet. This topic is addressed in more detail in a recent PRB policy brief, Adolescent Girls in Egypt. As PRB program director for the Middle East and North Africa Farzaneh Roudi explains in the report, early marriage for girls usually results in early childbearing, because newlyweds are generally expected to have a child soon after marriage, regardless of her age.

Farzaneh (Nazy) Roudi has been with PRB since 1987, and is the program director for the Middle East and North Africa (MENA).