Deciphering the Demography of Myanmar

(September 2014) Myanmar (known as Burma until May 1989) is back in the news, especially as it has recently made great strides toward a more democratic regime. The country is expanding its outreach to the international community and seeking more global economic connections. Most noteworthy, Myanmar has attracted foreign investors keen to capitalize on its natural resources such as natural gas, oil, minerals, and lumber.

However, due to decades of seclusion that only ended in 2011, much remains unknown about Myanmar, especially its demography. More than 30 years have passed since the last population census: A new census is currently underway. Therefore, even a simple population estimate is problematic.

Population Estimates Do Not Include Migration

A crucial factor influencing the population of Myanmar is migration. Myanmar borders Bangladesh, India, China, Laos, and Thailand, and has frequently maintained a fluid border population. Citizens have fled due to civil unrest, poverty, reduced employment, and hunger. However, official national estimates do not include any international out-migration during or since the turbulent times of military regimes.2

Thailand, the largest destination for Burmese migrants, officially reported 1 million Burmese workers in 2009. But many migrant workers, perhaps more than one-half, do not have legal work permits. Combined with refugees in other countries, as many as 3 million Burmese have left the country but are still counted in the old national population estimates. This situation compromises any attempt to obtain a reliable overall population estimate.

Violence between ethnic groups remains a problem in various regions in the country, most notably between the Muslim Rohingya and various Buddhist groups in the Rakhine State.4 The Rohingya are legally barred from citizenship and are viewed as Bangladeshi illegal immigrants, called Bengalis. The 2014 census would not allow ethnic Rohingyas to identify themselves as such, but instead required them to identify as Bengalis, which confirmed de facto their continued status as illegal immigrants, and precluded their inclusion in the census.5

Notwithstanding these shortcomings, Myanmar’s population pyramid, calculated from the most recent UNPD figures, provides some information on the demographic evolution of the country. It reflects in particular Myanmar’s population changes and fertility trends. It also sheds some light on the impact of past population policies.

From the current age structure, it appears that Myanmar’s population has undergone a demographic transition over the last half-century, although official estimates do not always account for this. Infant mortality rates have decreased from 116 deaths per 1,000 live births in 1970 to 49 in 2013 while life expectancy has increased from 51 years in 1970 to 65 in 2013.6 The rate of natural growth, which has been decreasing over the past 40 years, is currently estimated at 0.9 percent per year.7

The youth bulge between the ages of 15 and 30 shows the effects of past governmental pronatalist policies. A recent emphasis on birth spacing and limiting, however, is reflected in the narrowing of the population pyramid base seen under the age of 15. Accordingly, 28 percent of the population is below age 15 and only 5 percent above age 65. These observations align with Myanmar’s decreased fertility rates from 6.0 children in 1970 to 2.0 in 2013.8 In 2007, 38 percent of married women ages 15 to 49 were using a modern form of contraception. Nonetheless, in spite of low fertility rates, Myanmar still has a high level of unmet need for contraception (spacing and limiting), which is estimated at 18 percent.9 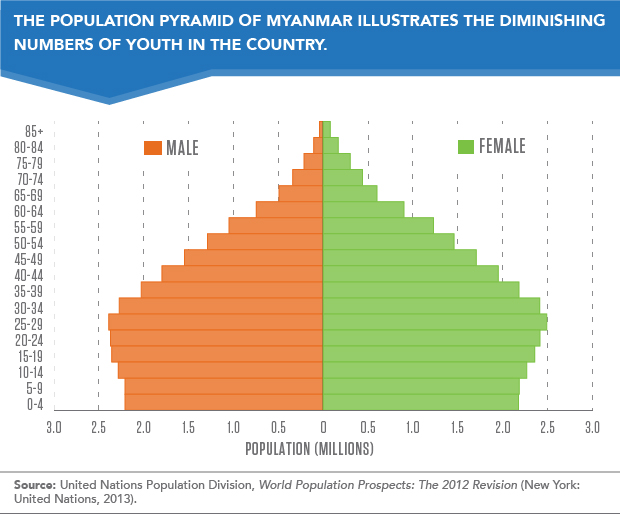 Toward A Promising Future

The decreased youth bulge reduces the risk for typical challenges facing a young population, namely bottlenecks to provide human capital investments (education and health) as well as employment. Consequently, the replacement-level fertility of Myanmar offers a measure of hope for the future, in contrast with politically less-stable countries with an ever-growing youth population.

Myanmar is also committed to fostering its economic development and bringing about other socioeconomic transformations. Although the country remains relatively rural (only 31 percent of the population lives in urban areas), a new capital, Nay Pyi Taw, which boasts a geographically centralized location, has replaced the old capital city of Yangon (formerly Rangoon), in an attempt to spur urban development beyond the traditional major cities of Yangon and Mandalay.10

With more favorable demographics and economic prospects on the rise, one can be cautiously optimistic in the years to come for democratization and stability in Myanmar.

John F. May is a Visiting Scholar at the Population Reference Bureau (PRB). Thomas R. Brooke is an intern at PRB. The authors want to thank Thomas Spoorenberg, United Nations Statistics Division, for his thoughtful comments on an earlier draft; and Allyson C. Lynch, intern at PRB, for her assistance with background research for this paper.