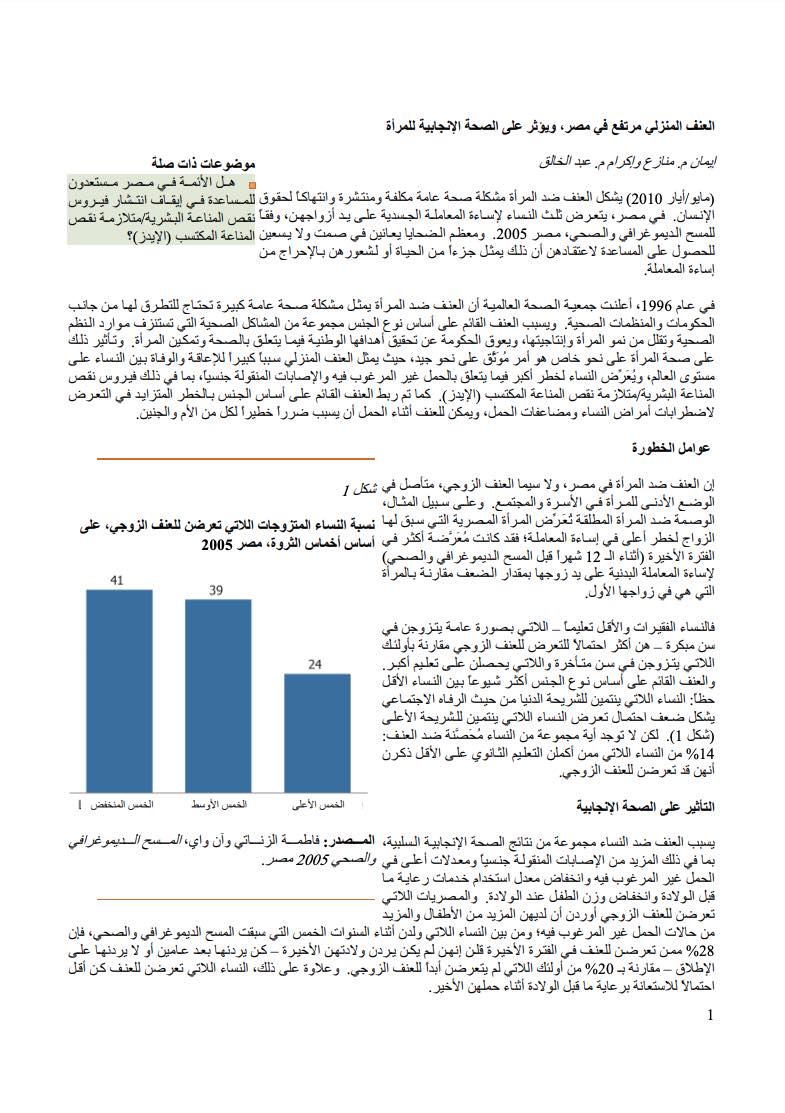 (May 2010) Violence against women is a costly and pervasive public health problem and a violation of human rights. In Egypt, a third of women are physically abused by their husbands, according to the 2005 Egypt Demographic and Health Survey (DHS). Most victims suffer silently and don’t seek help to prevent or stop the violence because they think it is part of life or they are embarrassed by the abuse.

In 1996, the World Health Assembly declared violence against women to be a major public health problem that urgently needed to be addressed by governments and health organizations. Gender-based violence causes a host of health problems that drain health systems’ resources, limit women’s growth and productivity, and hinder governments from achieving their national goals related to health and women’s empowerment. The impact on women’s health, in particular, is well documented. Domestic violence is a major cause of disability and death among women worldwide, and puts women at a higher risk for unintended pregnancies and sexually transmitted infections, including HIV/AIDS. Gender-based violence has also been linked to increased risk of gynecological disorders and pregnancy complications, and violence during pregnancy can cause serious harm to both the mother and fetus.

Percentage of Married Women Who Have Experienced Spousal Violence, by Wealth
Quintiles, Egypt 2005

Violence against women in Egypt, particularly spousal violence, is rooted in the subordinate position of women in the family and society. The stigma against divorced women, for example, puts Egyptian women who had a previous marriage at highest risk of abuse; they are twice as likely as women who are in their first marriage to be physically abused by their husband recently (during the 12 months prior to the DHS).

Poor and less-educated women—who generally tend to marry at a younger age—are more likely to experience spousal violence than those who marry later and have more education. Gender-based violence is more common among less privileged women: Women belonging to the lowest wealth quintile are more than twice as likely as those in the highest wealth quintile to experience spousal violence (Figure 1). But no group of women is immune to the violence: 14 percent of women who have completed at least secondary education reported having experienced spousal abuse.

Violence against women has a host of negative reproductive health outcomes, including more sexually transmitted infections (STIs), higher rates of unintended pregnancy, limited utilization of prenatal care, and low birth weight. Egyptian women who experienced spousal violence reported having more children and more unintended pregnancies; among women who gave birth during the five years prior to the DHS, 28 percent of those who experienced violence recently said they did not want their last birth—they wanted it at least two years later or not at all—compared with 20 percent of those who never experienced spousal violence. Furthermore, women who experienced violence were less likely to use antenatal care during their last pregnancy.

The DHS survey asked women whether they had a sexually transmitted infection or other symptoms in the past year. Women who reported spousal violence were more likely to report having STIs, particularly if there were more recent episodes of violence—one in four women who experienced violence in the 12 months prior to the survey also reported having an STI (Figure 2).

Percentage of Married Women Who Reported STIs in the Past Year, by Experience of Spousal Violence, Egypt 2005

Preventing gender-based violence and punishing the predators upholds women’s rights as full citizens and helps countries meet their development goals of improving maternal and child health. Interventions to address gender-based violence must focus on the legal, social, cultural, and health implications. By knowing that change in any of these areas takes time, particularly on the legal front, the Egyptian government and the NGO community can take these immediate steps:

Eman M. Monazea and Ekram M. Abdel Khalek are lecturers at the faculty of medicine at Assiut University in Egypt. This article presents some of the key findings of their larger research supported by the Bill and Melinda Gates Institute for Population and Reproductive Health at the Johns Hopkins Bloomberg School of Public Health, in Baltimore, Maryland.

N.N. Sarkar, “The Impact of Intimate Partner Violence on Women’s Reproductive Health and Pregnancy Outcomes,” Journal of Obstetrics and Gynecology 28, no. 3 (2008): 266-71.

United Nations General Assembly, Advancement of Women: Convention on the Elimination of All Forms of Discrimination Against Women, Report of the Secretary-General (New York: United Nations, 1991).