Elderly Immigrants in the United States 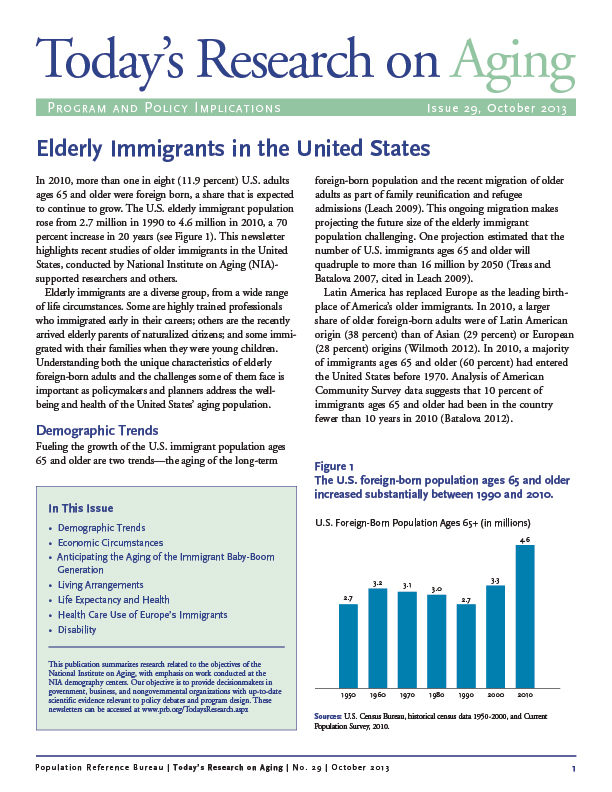 In 2010, more than one in eight U.S. adults ages 65 and older were foreign-born, a share that is expected to continue to grow. The U.S. elderly immigrant population rose from 2.7 million in 1990 to 4.6 million in 2010, a 70 percent increase in 20 years (see figure). This issue of Today’s Research on Aging reviews recent research examining older immigrants in the United States, conducted by National Institute on Aging (NIA)-supported researchers and others. Understanding both the unique characteristics of elderly foreign-born adults and the challenges some of them face is important as policymakers and planners address the well-being and health of the United States’ aging population.

The U.S. Foreign-Born Population Ages 65+ Increased Substantially Between 1990 and 2010. 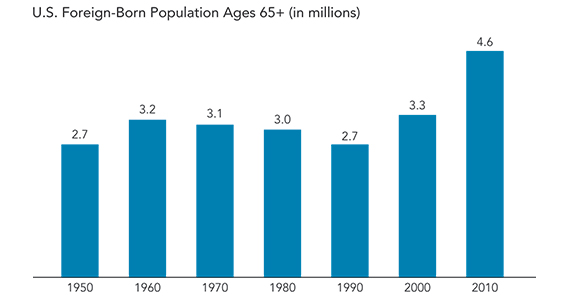 Fueling the growth of the U.S. immigrant population ages 65 and older are two trends—the aging of the long-term foreign-born population and the recent migration of older adults as part of family reunification and refugee admissions. Analysis of American Community Survey data suggests that 10 percent of immigrants ages 65 and older had been in the country fewer than 10 years in 2010. Most U.S. immigrants who settle in this country after age 60 are sponsored by their adult children who had immigrated to the United States as young adults.

Long-term immigrants who arrived in the United States as children or young adults tend to face challenges similar to their U.S.-born peers. By contrast, immigrants who migrate after age 60 are often a “potentially vulnerable population” due to limited English language proficiency, little or no U.S. work experience, and weak ties to social institutions, reports Judith Wilmoth of Syracuse University. They face rules barring them from participating in most entitlement and welfare programs unless they become naturalized citizens, but their language skills and age are often barriers to naturalization. Compared to immigrants who arrive earlier in life, late-life immigrants are more likely to be female, to have low education levels, to have limitations in physical functioning, and to be widowed.

The publication also explores recent research on the living arrangements, life expectancy, health, and disability levels of older immigrants in the United States.