(2013) This policy brief presents the latest data on child marriage in the Arab region, which includes members of the League of Arab States (stretching from Morocco to Oman). Arabic and English versions. 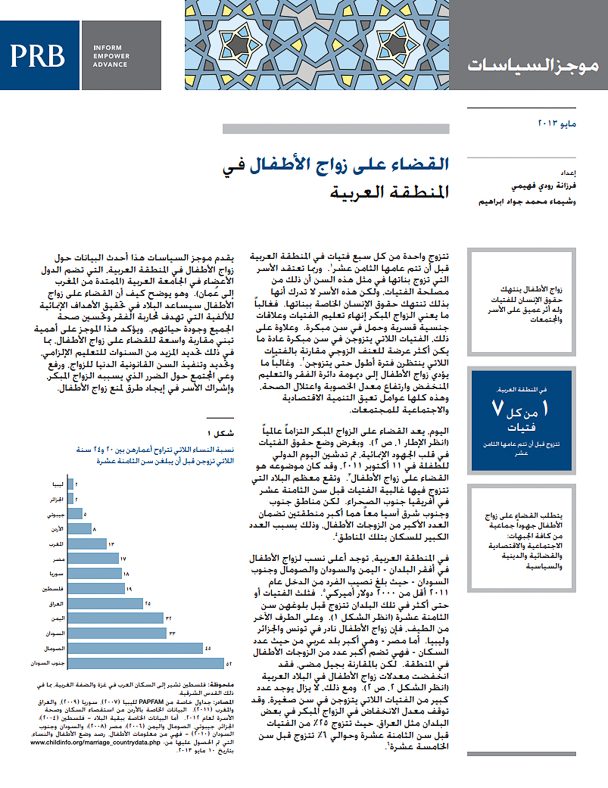 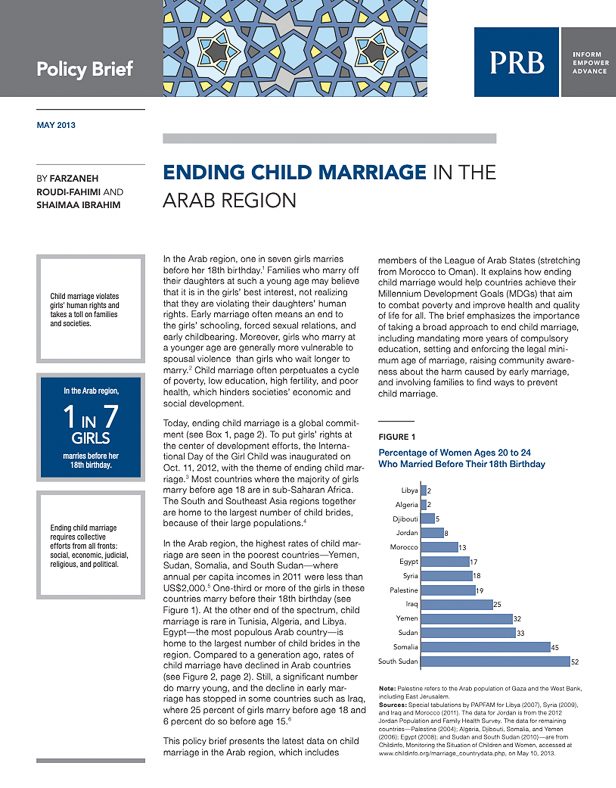 (June 2013) In the Arab region, one in seven girls marries before her 18th birthday.1 Families who marry off their daughters at such a young age may believe that it is in the girls’ best interest, not realizing that they are violating their daughters’ human rights. Early marriage often means an end to the girls’ schooling, forced sexual relations, and early childbearing. Moreover, girls who marry at a younger age are generally more vulnerable to spousal violence than girls who wait longer to marry.2 Child marriage often perpetuates a cycle of poverty, low education, high fertility, and poor health, which hinders societies’ economic and social development.

Today, ending child marriage is a global commitment. To put girls’ rights at the center of development efforts, the International Day of the Girl Child was inaugurated on Oct. 11, 2012, with the theme of ending child marriage.3 Most countries where the majority of girls marry before age 18 are in sub-Saharan Africa. The South and Southeast Asia regions together are home to the largest number of child brides, because of their large populations.4

In the Arab region, the highest rates of child marriage are seen in the poorest countries—Yemen, Sudan, Somalia, and South Sudan—where annual per capita incomes in 2011 were less than US$2,000.5 One-third or more of the girls in these countries marry before their 18th birthday (see figure). At the other end of the spectrum, child marriage is rare in Tunisia, Algeria, and Libya. Egypt—the most populous Arab country—is home to the largest number of child brides in the region. Compared to a generation ago, rates of child marriage have declined in Arab countries. Still, a significant number do marry young, and the decline in early marriage has stopped in some countries such as Iraq, where 25 percent of girls marry before age 18 and 6 percent do so before age 15.6

Percentage of Women Ages 20 to 24 Who Married Before Their 18th Birthday, Selected Countries in the Arab Region

Note: Palestine refers to the Arab population of Gaza and the West Bank, including East Jerusalem.
Sources: Special tabulations by PAPFAM for Libya (2007), Syria (2009), and Iraq and Morocco (2011). The data for Jordan is from the 2012 Jordan Population and Family Health Survey. The data for remaining countries—Palestine (2004); Algeria, Djibouti, Somalia, and Yemen (2006); Egypt (2008); and Sudan and South Sudan (2010)—are from Childinfo, Monitoring the Situation of Children and Women, accessed at www.childinfo.org/marriage_countrydata.php, on May 10, 2013.

This policy brief presents the latest data on child marriage in the Arab region, which includes members of the League of Arab States (stretching from Morocco to Oman). It explains how ending child marriage would help countries achieve their Millennium Development Goals (MDGs) that aim to combat poverty and improve health and quality of life for all. The brief emphasizes the importance of taking a broad approach to end child marriage, including mandating more years of compulsory education, setting and enforcing the legal minimum age of marriage, raising community awareness about the harm caused by early marriage, and involving families to find ways to prevent child marriage.

Farzaneh Roudi-Fahimi is director of the Middle East and North and North Africa Program at the Population Reference Bureau. Dr. Shaimaa Ibrahim is an obstetrician/gynecologist, and a reproductive health specialist at the maternal and child health and reproductive health unit of the Ministry of Health in Iraq.