Editor’s note: The recent earthquake in Haiti has reignited the issue of environmental refugees. To examine what recent research shows and how environmental change has affected migration, PRB is publishing two articles on environmentally induced migration, one that highlights Indonesia and Ecuador, and another from the experience of Hurricane Katrina in the United States.

(January 2010) As the evidence for global environmental change has accumulated over the past decade, academics, policymakers, and the media have given more attention to the issue of “environmental refugees.” A major concern is whether environmental change will displace large numbers of vulnerable people in the developing world, particularly from rural areas where livelihoods are especially dependent on climate and natural resources. A widely cited article estimated that more than 25 million people were displaced by environmental factors in 1995.1 Skeptics, however, derided these numbers as speculation.2 In fact, despite dozens of academic publications and several international conferences on the issue, well-documented cases of environmentally induced migration are largely limited to dramatic events such as Hurricane Katrina in the United States and the creation of the Three Gorges Dam in China.3 The still unclear consequences of smaller-scale but more pervasive forms of environmental change such as droughts and soil degradation limit our ability to predict the scale and nature of future human displacements under accelerating global environmental change. However, new research shows that environmentally induced migration can be temporary and involve relatively short distances, in contrast to fears of large numbers of environmental refugees moving across international borders.

Demographic Studies of Migration in Ecuador and Indonesia

Migrants respond to economic, social, and demographic factors in addition to the environment. Assessing environmental influences on migration is complex and must take these other factors into account. Research on migration and the environment has also been limited by the lack of appropriate data sets and by disciplinary boundaries between migration studies and environmental science. Recently, however, studies by Sabine Henry, Douglas Massey, myself, and others have used approaches from demographic studies of migration, often in combination with Geographic Information Systems, to overcome these challenges. These studies link individual-level data on migration to local characteristics of the environment, then analyze the migration process using multivariate statistical models. This approach represents a significant advance over both small-scale case studies and country-level analyses.

Two studies by myself and colleagues have applied this approach in Ecuador and Indonesia. In Ecuador, I collected survey data from 400 households and constructed a database that addresses the influence of local environmental conditions on migration.4 The study region in the southern Ecuadorian Andes is prone to droughts and is an important center of out-migration to internal and international destinations. These data show that communities with adverse environmental conditions (low rainfall and steep slopes) sent more migrants to nearby destinations but fewer migrants to distant and international destinations. This pattern is inconsistent with the environmental refugees narrative that predicts large-scale migration over long distances, but is consistent with previous studies. For example, in Burkina Faso, rainfall variability increased internal migration but decreased international migration; and in Nepal, local environmental degradation increased short-distance moves but not long-distance moves.5 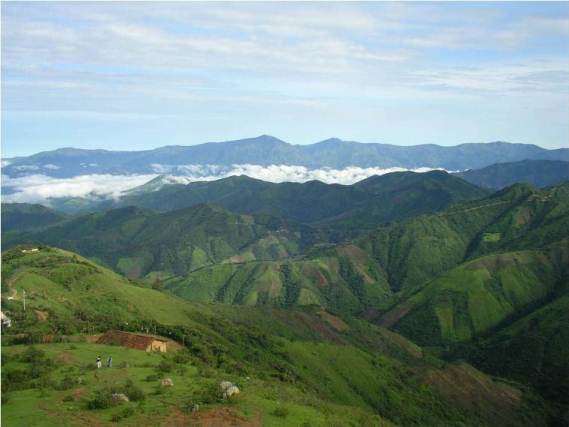 View of the Ecuador study area in the wet season. Photo: Clark Gray.

In Indonesia, I am participating in the Study of the Tsunami Aftermath and Recovery, which has collected a unique survey dataset in the region affected by the 2004 Indian Ocean tsunami. In each year since the tsunami, this project has tracked and reinterviewed 10,000 households in Aceh and North Sumatra who were first interviewed in the February 2004 round of the Indonesian National Socioeconomic Survey. Together with colleagues I am using this dataset to examine population displacement following the tsunami.6 Our results indicate that, as expected, the tsunami led to high rates of displacement in damaged communities. However, contrary to expectations, most of the displaced remained in or near their origin community, a large proportion stayed with friends or family rather than entering camps, and many returned to their homes within a few months after the tsunami. Vulnerable populations such as the poor were no more likely to be displaced than others. 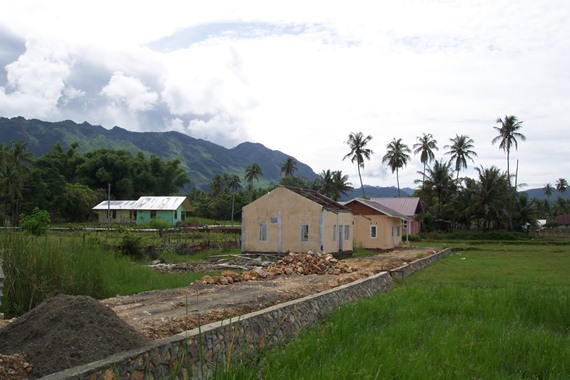 These are only two studies, but the picture they paint of environmentally induced migration is quite different from the dramatic images conjured by the term “environmental refugees”: Most environmental migrants moved short distances, adverse environmental conditions can actually reduce migration, and vulnerable populations are not necessarily more likely to be displaced. How to explain these results? Migration theory and geography provide some insights. First, a large number of studies have shown that individuals who are educated or better-off are more likely to migrate, due to the costs of migration and greater rewards for the educated. This fact suggests that environmental degradation might reduce migration, particularly to distant destinations, by reducing access to the resources needed to migrate. Second, if the environmental conditions that migrants are responding to vary on a small scale, then a local move might be enough to encounter better conditions or alternative livelihood opportunities.

However, neither of these perspectives is consistent with a view of vulnerable environmental refugees fleeing degradation over long distances or international borders. Instead, the narrative derives from a neo-Malthusian perspective in which vulnerable populations are assumed to have limited capacity to cope with adverse environmental conditions. This school of thought has been largely rejected by social scientists working on related human-environment issues and appears to have little explanatory power in this case.7

Our current limited understanding doesn’t allow us to predict with any clarity how migration might respond to future climate change. Large-scale natural disasters such as Hurricane Katrina and the Indian Ocean tsunami displace large numbers of people and the frequency of such events is likely to rise. The Indonesian case illustrates that even extreme events do not necessarily lead to an international refugee crisis. The consequences of more pervasive forms of environmental change such as droughts and soil degradation are less certain, but current research indicates that they are also unlikely to lead to large-scale movements of long-distance migrants. These studies make clear that environmentally induced migration is real and deserves to be on the international agenda, but simplistic views of massive numbers of “environmental refugees” moving across borders should be set aside.

Clark L. Gray is a geographer and postdoctoral researcher at Duke University.