Ethiopia at a Crossroads: Demography, Gender, and Development 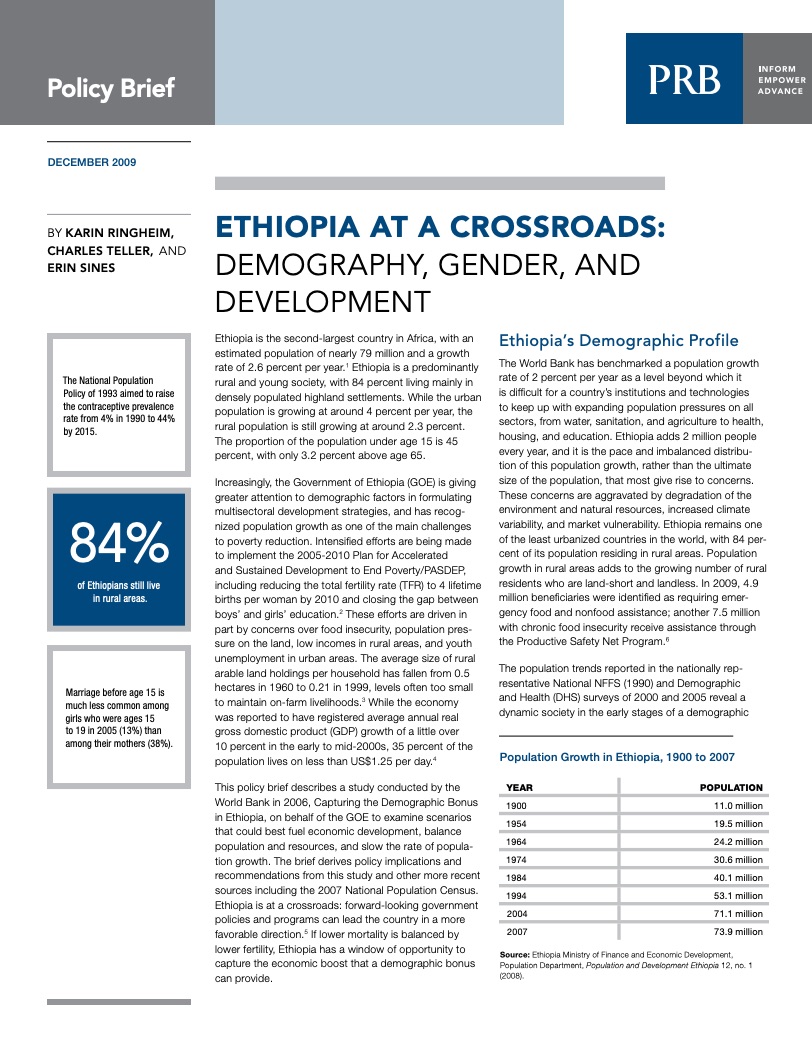 Policy Brief. Ethiopia at a Crossroads: Demography, Gender, and Development

(December 2009) Ethiopia is the second-largest country in Africa, with an estimated population of nearly 79 million and a growth rate of 2.6 percent per year.1 Ethiopia is a predominantly rural and young society, with 84 percent living mainly in densely populated highland settlements. While the urban population is growing at around 4 percent per year, the rural population is still growing at around 2.3 percent. The proportion of the population under age 15 is 45 percent, with only 3.2 percent above age 65.

Increasingly, the government of Ethiopia (GOE) is giving greater attention to demographic factors in formulating multisectoral development strategies, and has recognized population growth as one of the main challenges to poverty reduction. Intensified efforts are being made to implement the 2005-2010 Plan for Accelerated and Sustained Development to End Poverty/PASDEP, including reducing the total fertility rate (TFR) to 4 lifetime births per woman by 2010 and closing the gap between boys’ and girls’ education.2 These efforts are driven in part by concerns over food insecurity, population pressure on the land, low incomes in rural areas, and youth unemployment in urban areas. The average size of rural arable land holdings per household has fallen from 0.5 hectares in 1960 to 0.21 in 1999, levels often too small to maintain on-farm livelihoods.3 While the economy was reported to have registered average annual real gross domestic product (GDP) growth of a little over 10 percent in the early to mid-2000s, 35 percent of the population lives on less than US$1.25 per day.4

This policy brief describes a study conducted by the World Bank in 2006, Capturing the Demographic Bonus in Ethiopia, on behalf of the GOE to examine scenarios that could best fuel economic development, balance population and resources, and slow the rate of population growth. The brief derives policy implications and recommendations from this study and other more recent sources including the 2007 National Population Census. Ethiopia is at a crossroads: forward-looking government policies and programs can lead the country in a more favorable direction.5 If lower mortality is balanced by lower fertility, Ethiopia has a window of opportunity to capture the economic boost that a demographic bonus can provide.

This policy brief is based on a World Bank report by Luc Christiansen, John F. May, Kathleen Beegle, and Elizabeth Lule, Capturing the Demographic Bonus in Ethiopia: Gender, Development, and Demographic Actions (Washington, DC: World Bank, 2007).