The number of married same-sex couples in the United States has increased dramatically in recent years, as reported in a recent Bulletin on U.S. family change from the Population Reference Bureau.1 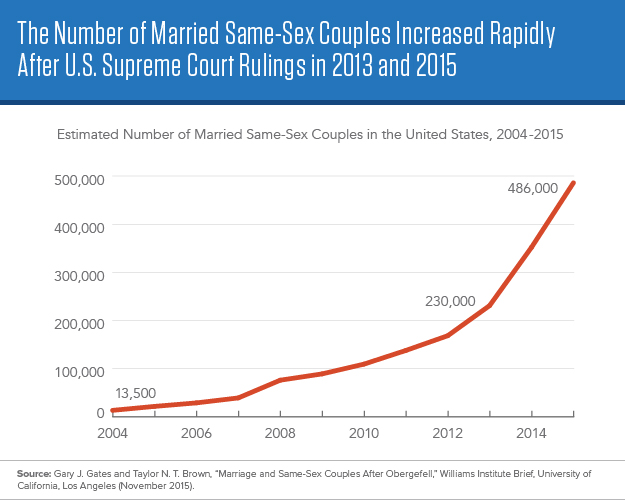 These estimates, by demographers at the Williams Institute at the University of California Los Angeles School of Law, are based on the Census Bureau’s American Community Survey (ACS) data for 2013 and 2014 and the 2015 Gallup Daily Tracking Survey, a privately-managed telephone survey.

The site also includes customizable graphs, charts, and maps on demographics of lesbian, gay, bisexual, and transgender (LGBT) individuals based on estimates from Gallup Daily Tracking Survey data. LGBT Americans made up an estimated 3.8 percent of the nation’s population or about 9 million people in 2011.2

The ACS does not specifically ask about sexual orientation and gender identity (SOGI) but allows researchers to estimate indirectly the number of same-sex couples based on household relationships. A couple is counted as a same-sex couple when the person who fills out the ACS form—usually the person owns or rents the home—identifies his or her relationship with another adult of the same sex in the household as either “husband/wife” or “unmarried partner.”

Census Bureau surveys will not identify same-sex couples if neither member of the couple is the person filling out the form or if both members of the couple do not report their partnership accurately due to concerns about confidentiality, Williams Institute demographers note.

However, the nationally representative Gallup Daily Tracking Survey does allow individuals to self-report their gender identity using the following question: “Do you, personally, identify as lesbian, gay, bisexual, or transgender?”

In recent years, the shifting state-level legal status of same-sex couples has made it difficult for social scientists to confidently report their numbers. Among the challenges are the relatively small size of the same-sex couple population—less than 2 percent of all U.S. couples either married or cohabiting. Additionally, enough different-sex couples accidently misidentify the gender of their partner on ACS questionnaires that these errors must be corrected to provide accurate estimates.3

In the future, social science research on intimate relationships that includes data on same-sex couples could offer insights that might benefit all couples. For example, Debra Umberson at the University of Texas-Austin and colleagues point out that studies on social support and health find that women in different-sex couples tend to provide more of the health-promoting, stress-relieving emotional support to their husbands than men do for their wives.4 Better understanding of how emotional support is provided within same-sex couples might identify more equitable patterns.

Better data and methods are needed to address the “dearth of data” for LGBT populations and to understand how they are faring, according to a recent report by the Federal Interagency Working Group on Improving Measurement of Sexual Orientation and Gender Identity in Federal Surveys.5 The report provides an overview of current data collection on SOGI, including the various types of questions used.

In a second paper the Working Group reviews recent research on the reliability and validity of current SOGI measures, and best practices to minimize measurement error.6 Their next paper will lay out a research agenda on SOGI for government data collection agencies.

Currently, 12 federal surveys and studies include SOGI questions (covering sexual identity, attraction, and behavior, as well as gender identity); the U.S. Department of Health and Human Services oversees 10 of these.

“Public officials draft and implement policies impacting the lives of everyone living in the United States—it is vital that they have robust information about the diverse communities within our populace, including the LGBT community,” Rep. Grijalva said about the bill.

“The current lack of sound data about sexual orientation and gender identity in many federal surveys means we are ill-prepared to meet the needs of these communities. To go uncounted is to be unseen in the eyes of policymakers, which is why we must develop a credible and confidential understanding of these vulnerable populations we currently know too little too little about.”

1.Alicia G. VanOrman and Paola Scommegna, “Understanding the Dynamics of Family Change in the United States,” Population Bulletin 71, no. 1 (2016).

2. Gary J. Gates, “How Many People Are Lesbian, Gay, Bisexual, or Transgender,” The Williams Institute, April 2011, accessed at http://williamsinstitute.law.ucla.edu/wp-content/uploads/Gates-How-Many-People-LGBT-Apr-2011.pdf, on Oct. 4, 2016.