Facts of Life: Youth Sexuality and Reproductive Health in the Middle East and North Africa 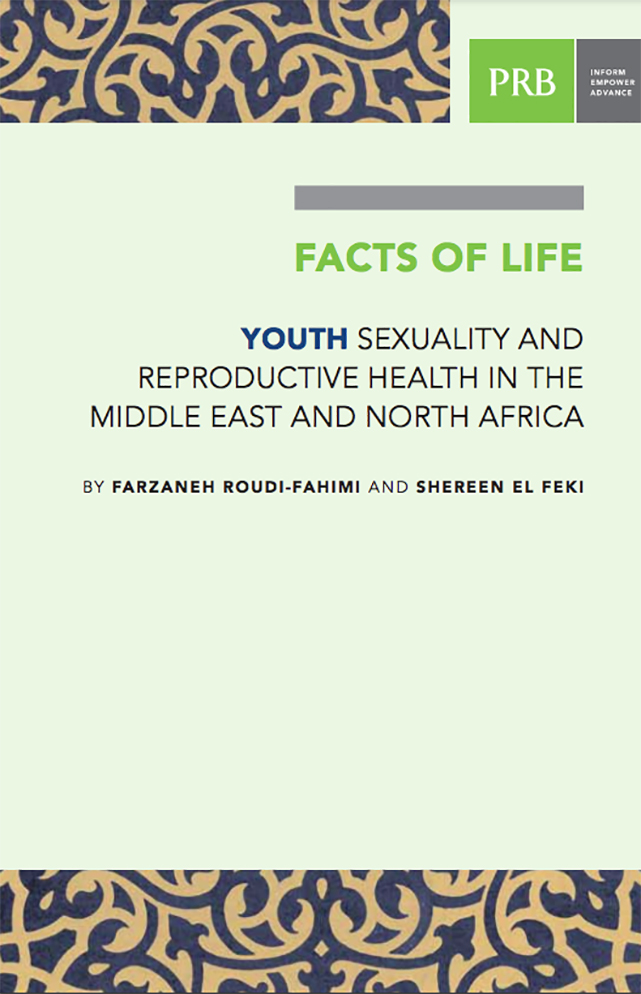 Report. Facts of Life-Youth Sexuality and Reproductive Health in the Middle East and North Africa

(June 2011) One in five people living in the Middle East and North Africa (MENA) region, or nearly 90 million in 2010, is between the ages of 15 and 24, a demographic group called “youth.” No longer children, but not yet independent adults, these young people are at a crucial juncture in their lives. The vast majority are physically ready to initiate sexual activity, making it critical to reach them with accurate information and accessible services to protect their sexual and reproductive health. All too often, however, young people’s sexual and reproductive health is excluded from countries’ health and development agendas, particularly in the MENA region.

Young people’s lives in MENA today differ dramatically from those of their parents. In the past, the transition from childhood to adulthood took place abruptly through early marriage and childbearing. Today, however, young women and men are staying in school longer and marrying later. With puberty starting earlier, largely because of better nutrition, youth now reach sexual maturity long before they are able to act on it in a socially acceptable manner—that is, through officially sanctioned marriage. During this extended period of adolescence, young people may have sexual relationships before marriage, putting them at risk of sexually transmitted infections, unintended pregnancies, unsafe abortions, and other problems that result from largely hidden activity.

At the other end of the spectrum, a significant number of girls in some countries and communities are still marrying at a young age. These relationships, though out in the open, also pose significant risks to the health and well-being of young women, both at the time of marriage and throughout their lives.

Like any other aspect of life, young people’s sexual and reproductive health behavior is shaped by the economic, social, and cultural context in which they are raised, including the powerful forces of religion and tradition, which set gender roles and define taboos. Parents and families strongly influence children’s behavior by enforcing these social norms. At the same time, however, globalization is bringing a new dimension into people’s lives, particularly those of young people, who have an enormous capacity to learn about and embrace new trends and technologies. At the click of a button, for better or worse, the Internet and satellite television expose users to a world of ideas and information beyond their immediate communities. Today’s youth must now navigate two worlds—local and global—simultaneously, which they often find in conflict.

Young people’s ability to produce and consume new media was amply demonstrated in the uprisings that swept the Arab world in 2011—political upheavals catalyzed by youth and the power of information technologies. Given the failure of governments in several countries to curtail access to the Internet during these events to suppress opposition, MENA countries would do better to empower youth to use new information technologies in positive ways, particularly when it comes to safeguarding their health.

Moreover, the prospect of democracy and increased participation of civil society in many countries in the region enables this generation of youth more than ever before to take part in local and national decisionmaking. MENA countries have an opportunity to involve youth—boys and girls—in development planning and programs, and allow them to articulate their needs and concerns. Such involvement of youth is particularly important when it comes to issues surrounding their sexual and reproductive health.

Investing in young people to ensure they are healthy and productive will boost nations’ ability to prosper and achieve their development goals. The extent to which the region’s largest youth population in history will achieve its full potential depends on how well governments and civil societies adapt to meet young people’s needs. Educational systems need to give students a quality education to prepare them for the global economy; labor markets must expand to provide jobs for their new entrants; housing markets must meet the demands of couples wanting to marry; and health services must adapt to the needs of a constituency they have largely overlooked.

Such demands lay at the heart of uprisings across the region—failure to substantively address them will perpetuate further political, economic, and social instability. Sexual and reproductive rights are integral to social development, and must be included in any systematic program of reform. MENA’s population, however expanding from Morroco to Iran, is diverse across and within countries in so many ways—socially, economically, and politically—that young people’s sexual and reproductive health needs must be addressed within the context in which they live.

This report looks at young people across the MENA region and the challenges they face in their transition to adulthood, specifically their sexual and reproductive health—a culturally sensitive topic for societies in MENA. The report highlights the urgency of acknowledging and addressing the needs of young people for sexual and reproductive health information and services. A few countries in the region are rising to this challenge, but many are still struggling. Failure to do so is not only a loss for today’s youth, but for society as a whole for generations to come.

Farzaneh Roudi-Fahimi is program director, Middle East and North Africa Program, at the Population Reference Bureau. Shereen El Feki is a writer, broadcaster, academic, and vice chair of the Global Commission on HIV and the Law, representing the Arab region.