Family Planning and Gender Equality: Paving the Road to Prosperity in Malawi 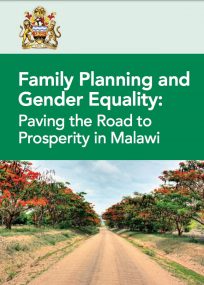 With a strong foundation of government commitment and leadership, and guided by the Malawi Growth and Development Strategy II (MGDS II), Malawi stands ready to achieve its Vision 2020 for growth. However, continued progress and a successful transition to the post-2015 development agenda will require the collective efforts of all ministries to put evidence into practise and make sound strategic investments.

Family planning is one such investment: one that is recognised as a “best buy” given its high ratio of benefits to costs. Likewise, evidence shows that gender equality and the empowerment of women are fundamental cornerstones of development.

Key family planning and gender equality indicators show that Malawi has made important strides over the past couple of decades. For example, contraceptive
prevalence has increased dramatically, from 13 percent in 1992 to 46 percent in 2010, well above the overall rate of 26 percent in sub-Saharan Africa. And in the
World Economic Forum’s Gender Gap Index, which highlights differences in access to resources between males and females, Malawi has risen from a rank of 87 in 2007 to 39 in 2013, putting it in the top one-third of included countries.

Despite these successes, there is still room for improvement. Unmet need for family planning remains high: One in four married women ages 15 to 49 would like
to space or limit births but is not using any method of family planning. Gender inequities also pervade Malawi’s social fabric. Recent analyses show significant disparities between Malawian men and women, particularly regarding economic and political power. In a more-pointed illustration, despite laudable progress toward achieving the Millennium Development Goals (MDGs), Malawi is likely to miss three gender-related targets: MDG 2—universal primary education, MGD 3— gender equality and empowerment of women, and MDG 5—maternal health.

Strategic investments in family planning and gender equality are well aligned with Malawi’s Gender Equality Act and the mandate of the National Gender Machinery. They also play an important role in optimising other development investments and spurring national growth.