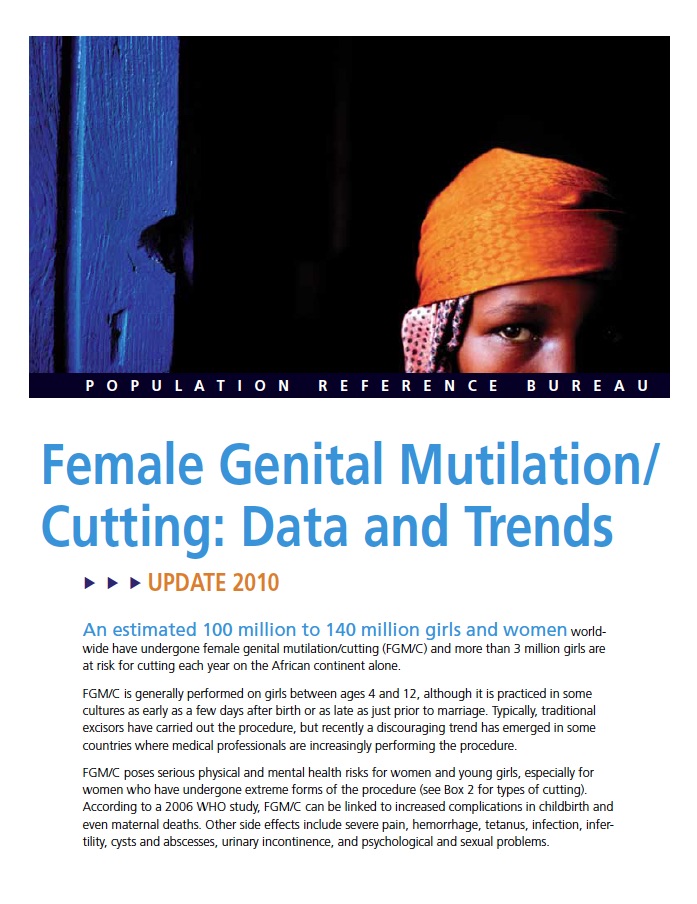 (February 2010) An estimated 100 million to 140 million girls and women worldwide have undergone female genital mutilation/cutting (FGM/C) and more than 3 million girls are at risk for cutting each year on the African continent alone.

FGM/C is generally performed on girls between ages 4 and 12, although it is practiced in some cultures as early as a few days after birth or as late as just prior to marriage. Typically, traditional excisors have carried out the procedure, but recently a discouraging trend has emerged in some countries where medical professionals are increasingly performing the procedure.

FGM/C poses serious physical and mental health risks for women and young girls, especially for women who have undergone extreme forms of the procedure. According to a 2006 World Health Organization study, FGM/C can be linked to increased complications in childbirth and even maternal deaths. Other side effects include severe pain, hemorrhage, tetanus, infection, infertility, cysts and abscesses, urinary incontinence, and psychological and sexual problems.

FGM/C is practiced in at least 28 countries in Africa and a few others in Asia and the Middle East. It is practiced at all educational levels and in all social classes and occurs among many religious groups (Muslims, Christians, and animists), although no religion mandates it. Data for 27 African countries are displayed in PRB’s new wall chart Female Genital Mutilation/Cutting: Data and Trends—Update 2010. The prevalence of FGM/C varies significantly from country to country, from nearly 98 percent in Somalia to less than 1 percent in Uganda. There is also wide variation by geographic region and rural or urban residence within many countries. In most countries, including Ethiopia, Liberia, and Kenya, the practice of FGM/C is more common in rural areas. But the reverse is true in some countries, including Nigeria.

Prevalence of FGM/C Among Younger and Older Women

Since the early 1990s, FGM/C has gained recognition as a health and human rights issue among African governments, the international community, women’s organizations, and professional associations. Global and national efforts to end FGM/C have supported legislation targeting excisors, medical professionals, and families who perpetuate the practice, but political will and implementation remain an issue. Of the 27 countries on the wallchart, 17 have laws that specifically prohibit FGM/C.

Some of the data that have been collected in recent years give hope to those working toward the abandonment of FGM/C as they reflect lower levels of cutting among girls ages 15 to 19. Although FGM/C is widespread in Egypt, for example, new survey results show that the practice may be on the decline. The Egypt Demographic and Health Survey 2008 reports that among women ages 15 to 19, the prevalence rate dropped to 81 percent, down from 96 percent in 2005. Given the fact that the age of circumcision in Egypt is generally before age 15 and that the government has banned the practice, these findings are encouraging.

Charlotte Feldman-Jacobs is program director, Gender, at the Population Reference Bureau. Donna Clifton is a communications specialist at PRB.