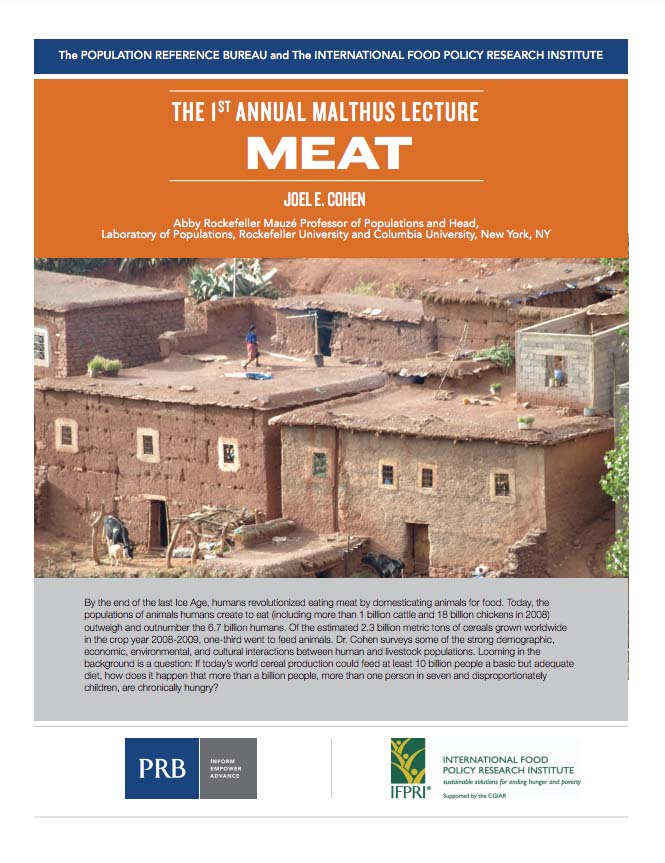 (April 2010) The Malthus Lectureship, a partnership between the Population Reference Bureau and the International Food Policy Research Institute (IFPRI), promotes the study of the connections among nutrition, food, agriculture, and population and invites an outstanding scholar or policymaker to give a presentation each year. The first Annual Malthus Lecture took place on March 3, 2010, in Washington, D.C.

Joel E. Cohen delivered the first Malthus Lecture, “Meat.” He surveyed some of the strong demographic, economic, environmental, and cultural interactions between human and livestock populations and their implications for public policy. Cohen is the Abby Rockefeller Mauzé Professor of Populations at The Rockefeller University and the Earth Institute of Columbia University, and a PRB Trustee. He heads the Laboratory of Populations at Columbia and Rockefeller Universities. Cohen studies populations of living beings and their interactions by combining mathematical tools with observations of concrete problems in demography, epidemiology, and ecology. Cohen is the author or editor of 14 books and 360 articles, including How Many People Can the Earth Support?

Eating meat has a deep evolutionary history that goes back to one cell engulfing another, long before multicelled animals existed. Carnivory influenced the evolution of our hominid ancestors and remains important to humans and humans’ nearest living primate relatives. By the end of the last Ice Age, perhaps 12,000 years ago, humans had revolutionized eating meat by domesticating animals for food. In the last half century, the magnitude, geographic scope, and complexity of eating meat have increased enormously. Today, the populations of animals humans create to eat (including 1.35 billion cattle and 18.4 billion chickens in 2008) outweigh and outnumber humans (6.7 billion in 2008, nearly 7 billion in 2011). Of the estimated 2.3 billion metric tons of cereals grown worldwide in the crop year 2008-2009, one-third went to feed domestic animals.

The strong demographic, economic, environmental, and cultural interactions between human populations and the populations of domesticated animals that people eat also involve the parasitic and microbial populations that eat humans and animals. The costs and consequences of eating meat have changed from largely local to local and global. Responses are required to get the prices of eating meat right and to protect the poorest people. Looming in the background is a troubling question. How does it happen that more than a billion people, more than one person in seven and disproportionately children, are chronically hungry, when world cereal production has the potential to feed 9 billion to 11 billion people a basic but adequate diet? Policies are recommended that could alleviate some of the problems associated with meat production and consumption, hunger, and poverty.