Global Aging: The Challenge of Success 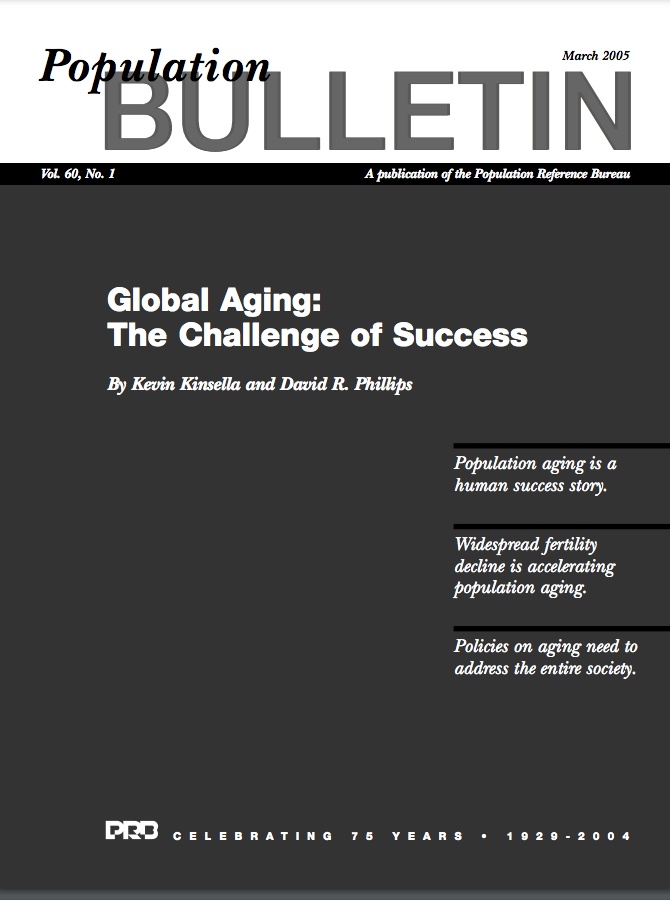 Population Bulletin, vol. 60, no. 1. Global Aging: The Challenge of Success

(March 2005) Populations are growing older in countries throughout the world. While the populations of more developed countries have been aging for well over a century, this process began recently in most less developed countries, and it is being compressed into a few decades. By 2050, nearly 1.2 billion of the expected 1.5 billion people age 65 or older will reside in today’s less developed regions. Just 22 percent of the world’s older people will live in what we today call more developed countries. This demographic transformation will profoundly affect the health and socioeconomic development of all nations.

Population aging may be seen as a human success story—the triumph of public health, medical advancements, and economic development over diseases and injuries that had limited human life expectancy for millennia. But the worldwide phenomenon of aging also brought an acknowledgement by the United Nations (UN) of the many challenges regarding aging and national development, issues concerning the sustainability of families and the ability of states and communities to provide for aging populations. In April 2002, representatives from 159 nations met in Madrid to convene the Second UN World Assembly on Aging, two decades after the first such assembly. During the 20-year interim between these major conferences, the focus had shifted from basic demographic and economic issues of aging to the inclusion of older people at all levels of society, a movement to expand roles for older people, and active aging policies. Policymakers increasingly recognize that policies on aging must address the entire society and people of all ages and that global aging needs to be integrated into the broader process of development. The central themes running throughout the Madrid International Plan of Action on Aging 2002 fall under three priorities:

• Advancing health and well-being into old age, and

This Population Bulletin addresses many issues that fall under these overarching priorities. It examines the causes of global population aging and considers related dimensions such as the importance of health improvements and extended life expectancy for the individual well-being of older people and for social costs related to health care.

This Bulletin also considers whether mounting evidence of declining disability at older ages answers the question: Are longer life expectancies accompanied by better health or simply more years of poor health? Related to this are questions surrounding intergenerational relationships affected by demographic and social changes, all central to the three priorities outlined at the Madrid conference. How will smaller families and new forms of familial organization, for example, affect social and personal support systems? How will the labor market, pension plans, and services adapt to longer life expectancies, as retirees require 25 or more years of income as well as social and other services?

David R. Phillips is chair and professor of social policy and academic dean for humanities and social sciences at Lingnan University, Hong Kong.