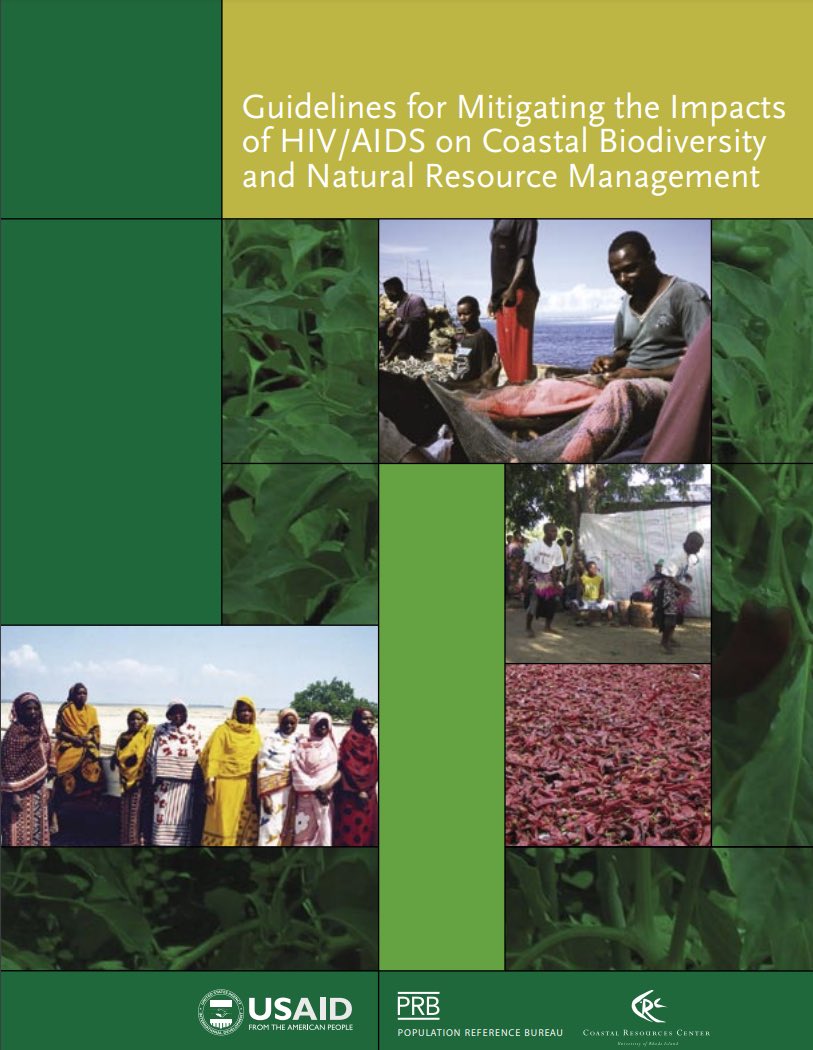 Report. Guidelines for Mitigating the Impacts of HIV/AIDS on Coastal Biodiversity and Natural Resource Management

(April 2007) To combat the threats of HIV/AIDS and ecological decline, the report Guidelines for Mitigating the Impacts of HIV/AIDS on Coastal Biodiversity and Natural Resource Management describes the problems that lie at the intersection between AIDS, gender, population, and coastal biodiversity conservation and resource management. It then recommends ways to reduce HIV prevalence and help mitigate AIDS’s negative impact on the environment.

“How AIDS has impacted the social and economic dimensions of peoples’ lives, especially in sub-Saharan Africa, has been well documented over the past two decades,” says Melissa Thaxton, a PRB policy analyst and co-author of the guidelines. “But how AIDS has impacted the natural environment is less understood. The guidelines are designed to help fill this gap and offer suggestions to help communities and local governments reduce the spread of HIV, while also reducing pressure on natural resources.”

A growing body of research suggests that HIV/AIDS poses four threats to coastal resources and biodiversity. It accelerates the rate of extraction of natural resources, such as fuel wood, wild foods, medicinal plants, and fish; decreases availability of productive labor; reduces management capacity; and results in the loss of traditional/indigenous knowledge and skills.

The guidelines are based on a threats assessment conducted as part of a pilot program implemented on the northern coast of Tanzania in eight villages bordering on or surrounded by the Saadani National Park. Funded by the United States Agency for International Development (USAID), the Population, Equity, AIDS, and Coastal Environment (PEACE) Project was begun in 2004 to improve biodiversity conservation, while also enhancing the quality of life of coastal people in Tanzania. It is now part of the larger SUCCESS-Tanzania project, which will continue through 2010.

The guidelines are organized around six goals:

Under each goal, the guidelines outline actions that communities can take to improve the lives of its most vulnerable members—such as women, youth, and AIDS-affected households. Actions include improving access to health services, establishing environmentally friendly economic activities, and increasing awareness about HIV/AIDS.

To reduce pressure on forests, for example, the project introduced the use of fuel-efficient stoves and established community wood lots as an alternative to cutting mangroves and/or coastal forests for fuel wood. It also helped HIV-positive men and women and female heads of household begin new ways of earning a living, such as paprika farming and milkfish culture—livelihoods that do not further stress the coastal resources or threaten coastal biodiversity. At the same time, a local nongovernmental organization uses theater performances to promote AIDS awareness and to initiate discussions of sensitive issues such as sex work, stigma, and gender inequality.

The report was made possible by funding from USAID and represents a collaboration between USAID, the University of Rhode Island’s Coastal Resources Center, PRB, and the World Conservation Union.