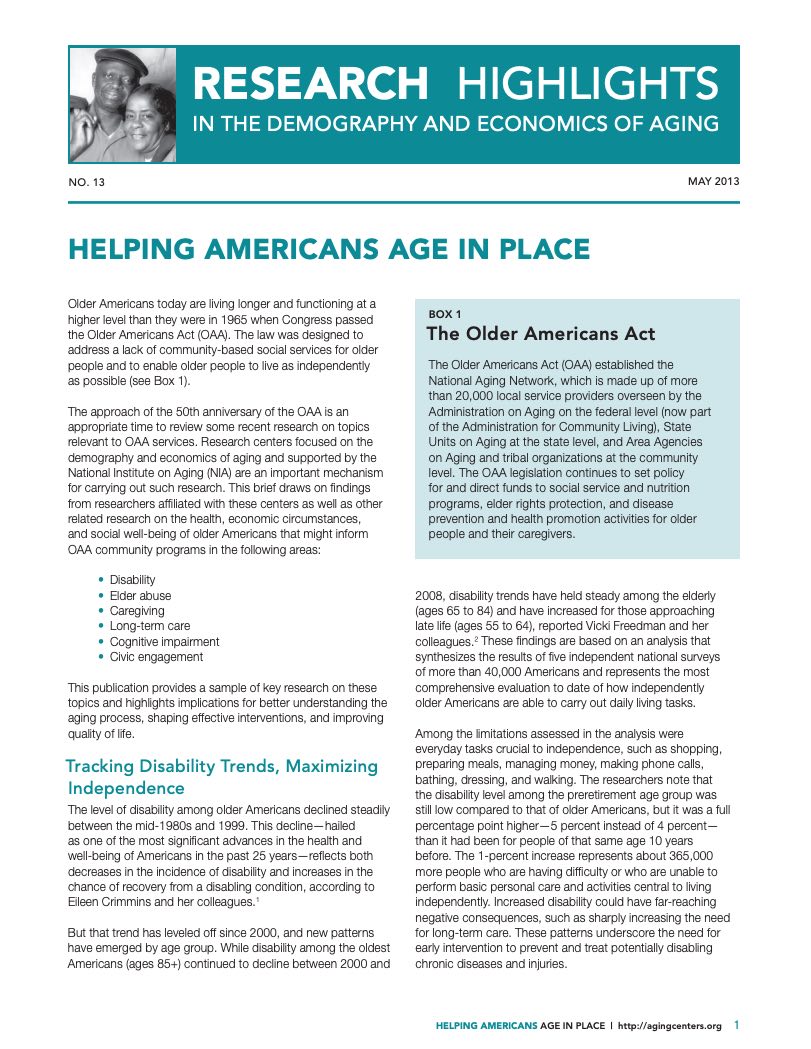 (May 2013) Household modifications, home-delivered meals, mental exercises, and caregiver support programs are among the things that can help keep older Americans living independently, suggests new research reviewed in Helping Americans Age in Place. This newsletter highlights research supported by the National Institute on Aging that might inform community-based social services provided under the Older Americans Act.

Increasing mobility. Assistive technology and devices (walkers, scooters) and household modifications (grab bars, bath seats, or ramps) that allow people to function independently are more widely used by non-Hispanic whites and those with higher income and education levels, find Vicki Freedman and colleagues. Minorities and those with lower socioeconomic levels are more likely to rely on someone else for help. The researchers suggest that public information campaigns and wider access could increase minority and low-income groups’ use of these items, narrowing this gap and promoting greater independence.

Preventing elder abuse. Older people referred to social service agencies for abuse were more likely to die than those without a known history of abuse, according to several studies. XinQi Dong and his colleagues demonstrated that the increased risk of death following mistreatment affects all groups, not just people with the lowest levels of cognitive or physical function, with the least social support and social engagement, or with the highest levels of depressive symptoms. These findings underscore the insidious nature of abuse and the importance of prevention efforts.

Long-term care. Spending on community-based services for certain groups of older adults appears to prevent or postpone more costly nursing home care. Kali Thomas and Vincent Mor compared state-level expenditures on a variety of Older Americans Act programs with the “low-care” nursing home population (those who do not need 24-hour skilled nursing care) ages 65 and older. Based on their analysis of 10 years of data, the proportion of adult nursing home residents with low-care needs is smaller in states that invest more in home-delivered meals for older adults.

Improving mental function. Researchers are finding that mental exercises can improve cognitive abilities in the areas in which training is received: Ten one-hour mental training sessions were associated with improved memory, concentration, and problemsolving skills in healthy, independent older adults for at least five years, according to analysis by Frederick Unverzagt and colleagues from the ACTIVE (Advanced Cognitive Training for Independent and Vital Elderly) study. Karlene Ball and her colleagues found that individuals who received training to improve speed of processing or reasoning had fewer collisions (per mile driven) where they were at fault than did individuals with similar characteristics who did not receive any cognitive training.