HIV/AIDS and Older Adults in the United States 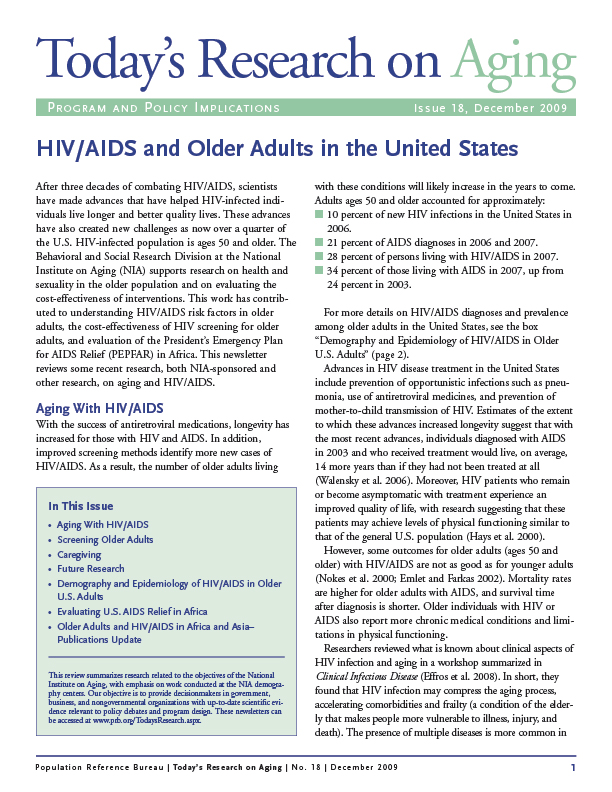 Today’s Research on Aging, Issue 18: HIV/AIDS and Older Adults in the United States

After three decades of combating HIV/AIDS, scientists have made advances that have helped HIV-infected individuals live longer and better quality lives.

These advances have also created new challenges as now over a quarter of the U.S. HIV-infected population is ages 50 and older. The Behavioral and Social Research Division at the National Institute on Aging (NIA) supports research on health and sexuality in the older population and on evaluating the cost-effectiveness of interventions. This work has contributed to understanding HIV/AIDS risk factors in older adults, the cost-effectiveness of HIV screening for older adults, and evaluation of the President’s Emergency Plan for AIDS Relief (PEPFAR) in Africa. This newsletter reviews some recent research, both NIA-sponsored and other research, on aging and HIV/AIDS.

With the success of antiretroviral medications, longevity has increased for those with HIV and AIDS. In addition, improved screening methods identify more new cases of HIV/AIDS. As a result, the number of older adults living with these conditions will likely increase in the years to come. Adults ages 50 and older accounted for approximately: