HIV in the Middle East: Low Prevalence but Not Low Risk

(December 2013) UNAIDS has estimated that around 270,000 people are living with HIV in the Middle East and North Africa (MENA) region, an overall HIV prevalence of 0.1 percent among adults ages 15 to 49, and one of the lowest rates among world regions.1 But other figures reveal a different picture. Between 2001 and 2012, the number of adults and children living with HIV in MENA increased by 73 percent and the number of new infections grew by 52 percent—the highest rates of increase among world regions (see figure).2

Percentage Change in the Annual Number of New HIV Infections by World Region, 2001-2012 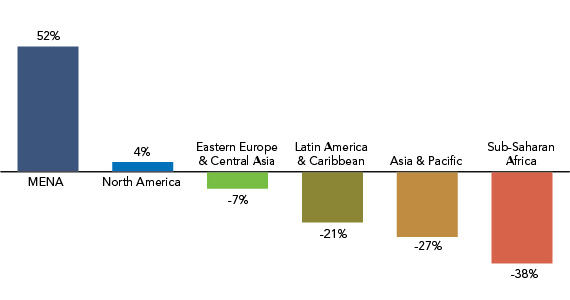 It is not just infections that are increasing. Between 2001 and 2012, the annual number of AIDS-related deaths in the region more than doubled, while the worldwide number dropped by 16 percent.3 The increasing AIDS-related deaths in MENA are due, in large part, to low levels of antiretroviral therapy (ART)—a combination of medicines that not only extends the lives of those infected with HIV, but also reduces the likelihood of viral transmission. On average across MENA, only one in five people in need of ART are getting the medicines they need—the lowest coverage rate among world regions.4 The treatment is particularly inadequate when it comes to women and children. Less than 10 percent of pregnant women living with HIV receive antiretroviral medicines to prevent transmission of the infection to their newborns—the lowest treatment rate among world’s regions.5

Spread of HIV in MENA

The first cases of AIDS in the MENA region were reported in mid-1980s. By 1990, every country had detected people living with HIV, the vast majority of these linked to HIV exposure abroad and through HIV-contaminated blood products or organ transplants. In the early 1990s, however, a new pattern of transmission emerged among “key populations” at greatest risk of infection. With the exception of South Sudan, parts of Somalia, and Djibouti where most HIV transmission is now taking place in the general population, HIV in MENA is concentrated in certain groups with behaviors that put them at a higher risk of infection—namely, men who have sex with men, female sex workers, and people who inject drugs.

Today, the number of new infections is increasing in every MENA country, although the principal routes of transmission vary from one country to another (see table). In Iran and Libya, for example, the majority of infections occur among people who inject drugs and their networks of sexual and injecting partners. On the other hand, in Djibouti, South Sudan, and parts of Somalia, HIV has spread through commercial sex networks.

As for the region’s key populations:

Global experience has shown that the spread of HIV infection from these key populations to the general population can occur rapidly when key populations lack access to prevention and treatment services. Individuals engaged in high-risk practices can pass the infection to their spouses and other sexual partners. In Morocco, for example, the vast majority (89 percent) of HIV infections among men are due to high-risk behaviors, such as having sex with other men or with female sex workers or sharing contaminated needles. About half of Morocco’s new HIV infections are among females, but nearly three-quarters of them acquired the infection from their husbands.6 Also in Iran—home to more than one-quarter of people living with HIV in the region—three-quarters of women living with HIV acquired the infection from their husbands, who are predominantly injecting drugs.7 As the number of women who are HIV positive grows in the region, so does mother-to-child transmission, in the absence of adequate preventive measures. (Iran and Morocco have conducted more research on HIV and AIDS than any other country in the region.)

The low prevalence of HIV in general populations of MENA has been attributed in part to the region’s religious and cultural norms, which discourage premarital sex, encourage faithfulness within marriage, and include the universal practice of male circumcision. During the 1980s and 1990s, counting on their cultural and religious values to safeguard their populations against HIV infection, a number of MENA governments denied the presence of HIV among their citizens. But these countries now belatedly acknowledge HIV prevalence in their populations. In reality, a gap exists between what is preached by religion and what is practiced by believers, and this is as true in MENA as anywhere else in the world. Growing evidence shows that people in MENA are engaging in unsafe sexual and injecting drug practices.

Some cultural practices in MENA may even exacerbate the spread of HIV, such as child marriage, polygamy, prohibitions against condom use, or narratives linking HIV to immorality. Gender inequalities, stemming from the low status of girls and women in the family and society, are endemic in the MENA region, hindering human development and progress, including an adequate HIV response.

HIV in MENA is a double bind. Those who are at greatest risk of infection are also engaged in activities, such as sex work or same-sex relations, which are condemned by religious doctrine and social norms and often reinforced in law through criminalization. This wide-ranging stigma and discrimination further fuels the epidemic by driving those living with HIV and those most-at-risk of infection away from testing and disclosure, making HIV prevention and treatment increasingly difficult, all the more so given a background of poverty, gender discrimination, population mobility, and conflict in many countries.

Since 2010, political upheaval sweeping the Arab region has put a spotlight on human rights and development, and possibilities for change in an emerging democratic order. Just as the Arab Spring is playing out differently in countries across the region, so too is its impact on people living with HIV, those at greatest risk of infection, and those on the front lines of rising to the challenge of the epidemic. Today, human rights are the cornerstone of global efforts to achieve “zero new infections, zero AIDS-related deaths, and zero discrimination,” providing an opportunity for MENA countries to embrace human-rights principles not only in their direct response to HIV, but also in creating the broader political, economic, and social conditions that will improve the general welfare and reduce vulnerability to HIV.

Hamidreza Setayesh is UNAIDS Country Coordinator for Sudan. Farzaneh Roudi-Fahimi is program director for the Middle East and North Africa at the Population Reference Bureau. Shereen El Feki is an author, broadcaster, academic, and former vice chair of the Global Commission on HIV and the Law. Lori Ashford is an independent reproductive health consultant. This article is excerpted from a forthcoming report to be published by PRB on HIV/AIDS in the Middle East and North Africa. 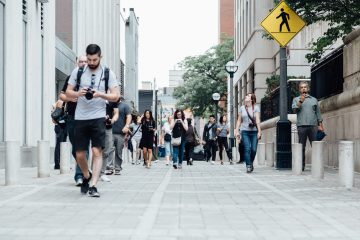