The U.S. Census Bureau aims to count each person once—and only once—in the decennial census. It does that by determining how many people live at every residential address.

But how does it count people with more than one address? Or military personnel deployed overseas? Or people incarcerated in correctional facilities? Or those who live in different places at different times of the year or who don’t have an address at all?

The answer is… it depends! And the answer matters because where people are counted can have far-reaching implications, from political representation to local infrastructure and services.

To handle special cases, the Census Bureau has established residence rules to ensure that each person appears in the decennial count only once. For example:

The full list of residence rules for the 2020 Census published in February 2018.1

Many of the 2020 residence rules remain unchanged from the 2010 Census count, but some changes in 2020 will affect where people are counted, which in turn could affect reapportionment—the process of allocating seats in the U.S. House of Representatives based on each state’s share of the U.S. population.

A key change to residence rules will affect where tens of thousands of overseas-deployed military personnel are counted.2 In a break from prior practice, the 2020 Census will count deployed personnel at their usual residence rather than at their “home of record” (the address the servicemember provided when they entered military service).

Consider the example of a sailor who enlisted in the Navy in Des Moines, Iowa, in 2011 and who is stationed in San Diego, California, in 2020. The sailor has leased an apartment in San Diego but is deployed to the Persian Gulf on Census Day. Under prior rules, the sailor would have been counted overseas and listed (only) in the congressional reapportionment count for Iowa. In 2020, based on the revised rules, the sailor will be counted in San Diego—for purposes of reapportionment and in all other data, including redistricting files and other local tabulations. This shift in residence rules is intended to better reflect the usual residence of deployed personnel and implications for local infrastructure and services, like hospitals and schools, associated with that population.

Deployments from a given community can range from a handful of personnel to several thousand, and deployments can be unpredictable, so the effect of this rule change on population counts will be unknown until after the 2020 Census is complete.

The change to recording deployed personnel at their usual residence rather than home of record will likely result in substantial population increases in communities near major military installations such as Fayetteville, N.C.; Jacksonville, N.C.; Killeen, Texas; Nashville, Ky.; Norfolk, Va.; San Diego, Calif.; and Tacoma, Wash.3

Servicemembers and federal civilian employees and family members who are deployed or stationed overseas for extended periods of time will continue to be counted as residing in their home state for apportionment purposes only for. the 2020 Census.

People in correctional facilities have been, and will continue to be, counted in their location (jail or prison) on Census Day. But this rule has created controversy.

During the public comment period for the proposed residence rules for 2020, a substantial number of people (nearly 78,000) protested the rule for correctional populations, urging that prisoners be counted at their home or pre-incarceration address because of the temporary nature of most incarcerations.4 In 2017, about half (48 percent) of the 2.2 million people living in adult correctional facilities lived at a different residence the year before, and about 30 percent (more than 650,000 people) were incarcerated in a county different from their residence the prior year.5 Critics argue that counting the correctional population at the facility rather than at a pre-incarceration address inflates the electoral weight of voters in the districts with correctional facilities while diminishing the weight in other areas.6

The Census Bureau notes that the existing rule aligns with the concept of usual residence. However, in acknowledgment of concerns about the correctional residence rule, the Census Bureau plans to provide additional population detail, including population counts for correctional facilities, when it publishes redistricting data. While the residence rule has not changed, data will be available for use in redistricting efforts.

2. Military personnel may be deployed or stationed overseas—the two terms reflect different conditions and durations of overseas assignment. Being stationed overseas is considered a long-term relocation, sometimes for several years, and may include relocating family and setting up a household in the overseas location. Deployments, on the other hand, are temporary in nature, usually lasting a year or less. Deployed personnel do not set up overseas households, and family members do not relocate with deployed servicemembers. The revised residence rules affect only those who are deployed.

3. U.S. Department of Defense, “2017 Demographics: Profile of the Military Community,” https://download.militaryonesource.mil/12038/MOS/Reports/2017-demographics-report.pdf. Major installations listed here are communities that are the permanent duty station for at least 65,000 active duty personnel. 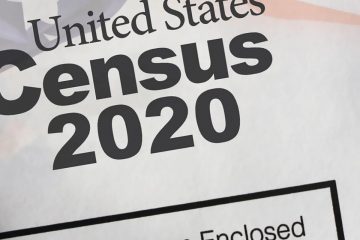 Why Is the U.S. Census So Important?