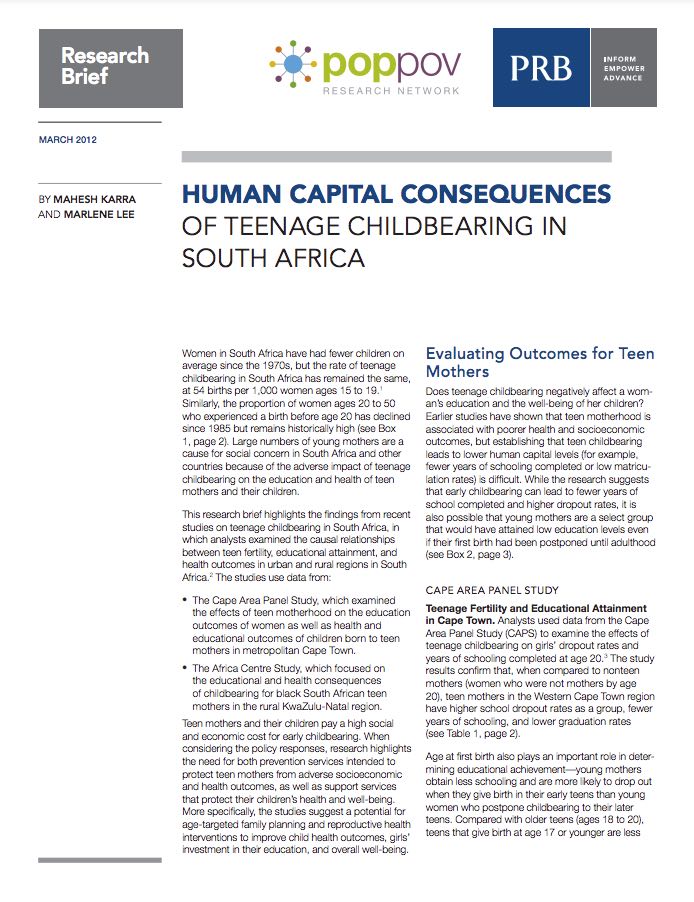 (April 2012) Women in South Africa have had fewer children on average since the 1970s, but the rate of teenage childbearing in South Africa has remained the same, at 54 births per 1,000 women ages 15 to 19. Similarly, the proportion of women ages 20 to 50 who experienced a birth before age 20 has declined since 1985 but remains historically high. Large numbers of young mothers are a cause for social concern in South Africa and other countries because of the adverse impact of teenage childbearing on the education and health of teen mothers and their children.

This PopPov network research brief highlights the findings from recent studies on teenage childbearing in South Africa, in which analysts examined the causal relationships between teen fertility, educational attainment, and health outcomes in urban and rural regions in South Africa. The studies use data from:

The PopPov Network makes research grants, supports dissertation fellows, sponsors meetings and workshops, and now provides an online space for the poppov research community. The goal of the network is to highlight the needs of the researchers, highlight state of the art methodologies, encourage and teach the next generation of researchers, and share ideas and communicate findings among the research community.

Mahesh Karra is a policy analyst in International Programs at PRB. Marlene Lee is program director, Academic Research and Relations, at PRB.