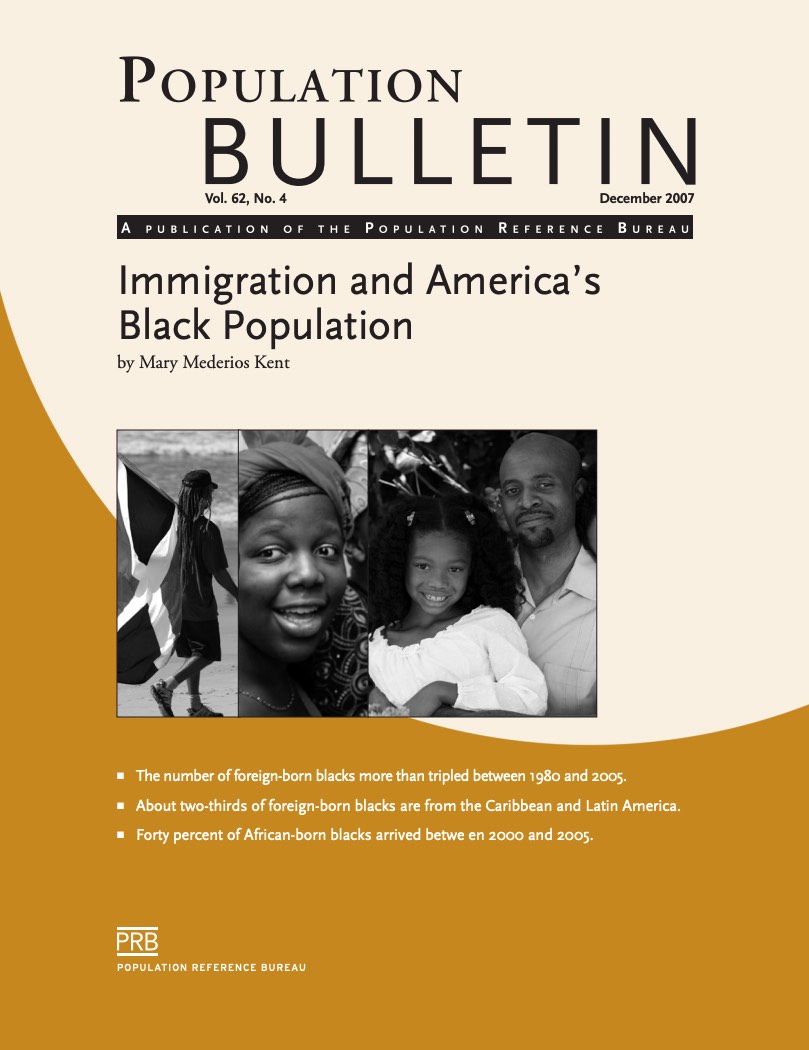 (December 2007) New flows of immigrants from Africa and the Caribbean are a growing component of the U.S. population. They are part of the racial and ethnic transformation of the United States in the 21st century. Although far outnumbered by nonblack Hispanic and Asian immigrants, the number of black immigrants is growing at a remarkable rate. More than one-fourth of the black population in New York, Boston, and Miami is foreign-born. Immigration contributed at least one-fifth of the growth in the U.S. black population between 2001 and 2006.

Forces Behind Renewed Immigration of Blacks

Several new developments sparked renewed immigration of blacks from the Caribbean and Africa beginning in the 1970s. New laws opened legal channels for people wanting to immigrate to the United States. Cheaper and more frequent air travel reduced the physical and psychological distances. Better telephone and eventually email communications connected immigrants to their families back home, and sent news of job opportunities to potential immigrants.

Poor economic prospects, political instability, and violence in some areas were powerful “push” factors. The strong U.S. economy and the United States’ long history as an immigrant country were among the factors attracting additional newcomers from these regions. Some analysts also point to a less welcoming atmosphere for Africans in Europe as encouraging potential immigrants to come to the United States.1

A Dramatic Surge in the Foreign-Born Black Population

The foreign-born black population rose nearly seven fold between 1960 and 1980, and more than tripled between 1980 and 2005. The foreign share of all U.S. blacks increased from less than 1 percent to 8 percent during these years. This was a sizeable increase, even though the percent foreign-born is much higher (12 percent) for the entire U.S. population.2 The number of Haitians—the second-largest Caribbean group—nearly quadrupled between 1980 and 2005, and the number of Jamaicans—the largest Caribbean group—more than doubled. The increases were even more dramatic among African groups. The number of Ethiopians in 2005 is 13 times the 1960 number.

Overall, the number of foreign-born blacks rose from 125,000 in 1980 to 2,815,000 in 2005, with a majority arriving just since 1990 (see figure). About two-thirds of black foreign-born are from the Caribbean and Latin America, and one-third from Africa. Only a small fraction were born in Europe, Canada, or elsewhere. But the African share is growing. More African-born blacks arrived between 2000 and 2005 than in the previous decade.

Timing of Entry for Foreign-Born Blacks by Region of Birth, 2005

Until recent years, new black immigration was little noticed outside a few cities—especially New York and Miami-where communities of West Indians, Haitians, Nigerians, and other black immigrants flourished. But that has changed in recent decades as Somali communities have grown up in Columbus, Ohio, Lewiston, Maine, and Minneapolis.3 Immigrant blacks and their children are gaining prominence in many fields, raising their visibility and attracting attention among the general population.

These immigrants have high educational attainment—38 percent of African-born and 20 percent of Caribbean or Latin American-born blacks have a college degree. They tend to have low rates of unemployment and poverty, compared with the general population. But they often are underpaid and underemployed given their educational achievements and experience. Like most newcomers, immigrant blacks face myriad challenges as they join the labor force and raise their families in the United States. As they adapt to life in their new country, they will also change the society around them, especially as their numbers grow and they expand to more corners of the country.