Immigration to the United States 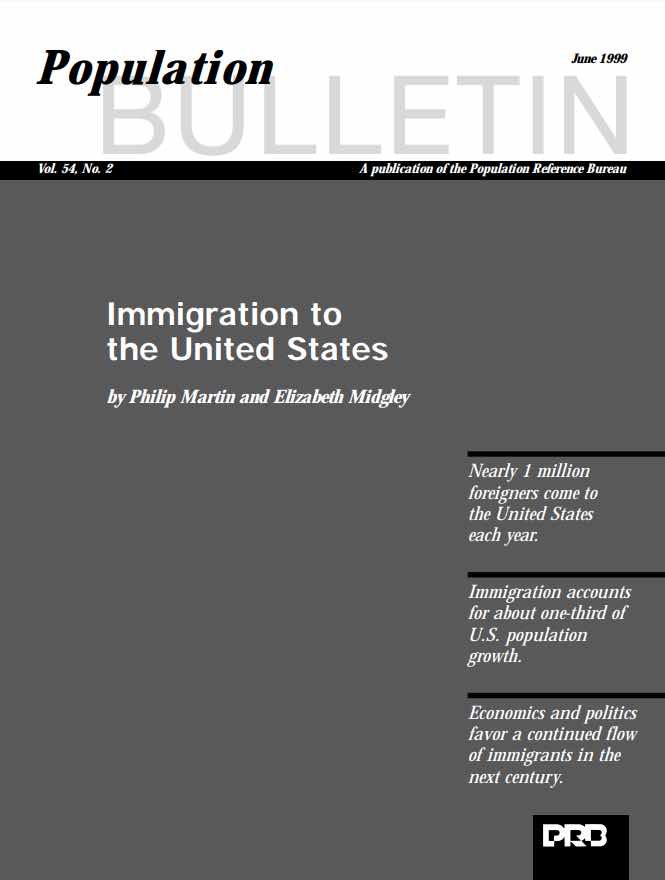 Population Bulletin, vol. 54, no. 2. Immigration to the United States

Nearly 70,000 foreigners arrive in the United States every day. Most of these travelers are visitors, not settlers. More than 60,000 are tourists, business people, students, or foreign workers who are welcomed at airports and border crossings. About 2,200 daily arrivals are immigrants or refugees who have been invited to become permanent residents of the United States. Finally, about 5,000 foreigners make unauthorized entries each day. About 4,000 of them are apprehended just after they cross the U.S.-Mexico border. But nearly 1,000 elude detection, or slip from legal to illegal status by violating the terms of their visas. Many will remain, while others will return to their home countries.

Is the arrival of so many people in the United States to be welcomed or feared? There is no single answer, which helps explain why Americans are ambivalent about immigration. The United States has always celebrated its immigrant heritage. Americans tell and retell stories of courageous and energetic settlers from abroad. But Americans also have worried since the country’s founding about potential economic, political, and cultural disruption caused by immigrant communities.

In the 1880s, as immigration numbers surged, public concern that too many “undesirable” people were entering the country led the U.S. Congress to place limits on who could immigrate. Prostitutes, low-skilled contract workers, and Chinese—among others—were barred from entry. At the turn of the century, more than 1 million immigrants entered each year, primarily from southern and eastern Europe. The American populace, which came primarily from northern and western European stock, felt that there were too many immigrants and that they were coming from the “wrong” countries.These concerns led to quantitative as well as qualitative restrictions on immigration in the 1920s to try to preserve and perpetuate the northern and western European majority.

In 1965, at the height of the U.S. civil rights movement, Congress passed a law that transformed the basis for selecting immigrants. The new law abolished national quotas and replaced them with a complex system that grants priority to three categories of foreigners: those with relatives living in the United States, people needed to fill vacant U.S. jobs, and refugees. The 1965 law had unexpected consequences. The main countries of origin for U.S. immigrants shifted from Europe to Latin America and Asia. In addition, changes in the U.S. economy and society in the 1970s and 1980s and growing emigration pressures in Mexico and Central America made controlling unauthorized migration a major political issue.

At the end of the 20th century, immigration is as contentious an issue as it was at the century’s beginning. Opinions about immigration generally lie between two extreme views: “no immigrants” and “open borders.” The Federation for American Immigration Reform (FAIR), for example, favors severely reducing U.S. immigration. FAIR charges that immigration contributes to excessive population growth and environmental degradation, displaces low-skilled American workers, depresses average wage levels, and threatens the cultural bonds that hold Americans together. FAIR calls for a stop to most immigration for several years to allow recent arrivals and Americans time to adjust to one another. Minimal immigration of 200,000 to 300,000 a year would be allowed during the adjustment period.

The Wall Street Journal, the leading U.S. newspaper for the business world, exemplifies the other side of the immigration debate. The Journal advocated a five-word constitutional amendment: “there shall be open borders”—in a 1990 editorial. Wall Street Journal editorials often cite the benefits of immigration for the U.S. economy and labor force—more people mean more consumers and more workers, which helps the economy grow.

Groups such as the Organization of Chinese Americans and the Emerald Isle Immigration Center favor immigration from particular countries or regions. The Catholic Church and some other religious organizations oppose immigration controls because they believe that national borders artificially divide humanity. Other people and groups support continued immigration as a defining part of the American national identity.

The United States is a nation of immigrants, as reflected in its motto e pluribus unum—”from many, one.” U.S. presidents frequently remind native-born Americans that their forebears left another country to begin anew in the United States. Immigration permits individuals to better themselves financially. Many believe that it also strengthens the United States. The Commission on Immigration Reform, established by Congress, reflected a widely shared American opinion when it asserted in 1997 that “a properly regulated system of legal immigration is in the national interest of the United States.”

Yet immigration changes society, and it raises fundamental questions for Americans. Who are we? What kind of a society have we built, and whom shall we welcome to it? What should we do to encourage the integration of newcomers? How should we deal with those who arrive uninvited?

This Population Bulletin examines current immigration patterns and policies in the United States, reviews the peaks and troughs of immigration flows, and provides a historical perspective on contemporary trends. The nation’s approach to controlling the number and characteristics of newcomers has seen many changes throughout its history. In the past, as in the present, immigration laws have often produced dramatic consequences, some of which were unintended. Resolving the fundamental economic, social, and political issues raised by immigration requires weighing the choices or trade-offs between widely shared but competing goals in American society.