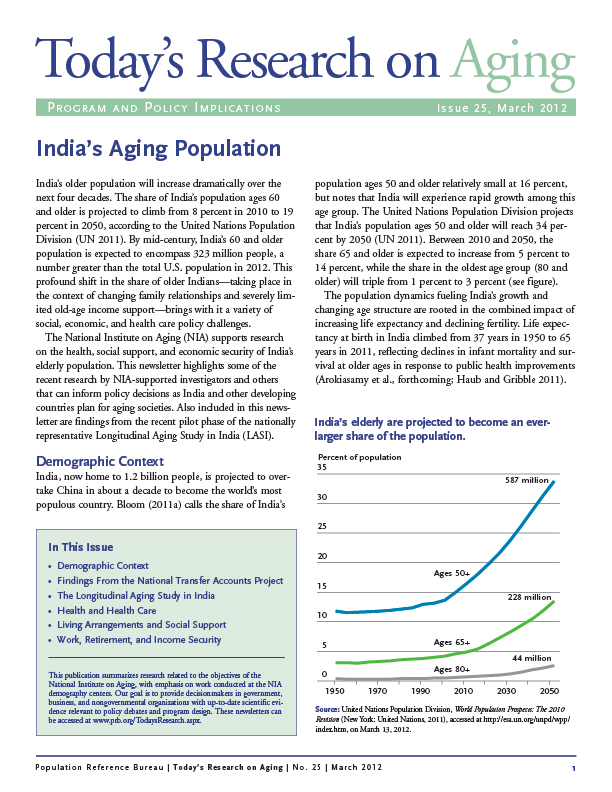 (March 2012) India’s population ages 60 and older is projected to increase dramatically over the next four decades, from 8 percent in 2010 to 19 percent in 2050, according to the United Nations Population Division.

By mid-century, this age group is expected to encompass 323 million people, a number greater than the total U.S. population in 2012. This profound shift in the share of older Indians—taking place in the context of changing family relationships and severely lim­ited old-age income support—brings with it a variety of social, economic, and health care policy challenges.

This e-newsletter highlights some of the recent research by National Institute on Aging-supported investigators and others that can inform policy decisions as India and other developing countries plan for aging societies.

Health and Health Care: The aging of India’s population will lead to increases in the preva­lence of chronic conditions such as diabetes and hyperten­sion. By one measure, nearly one-half (45 percent) of India’s disease burden is projected to be borne by older adults in 2030, when the population age groups with high levels of chronic conditions will represent a much greater share of the total population. Early results from the pilot phase of the Longitudinal Aging Study in India illustrate the health risks faced by older Indians. Thirteen percent of older Indians sampled have some type of disability that affects at least one activity of daily living. More than one-quarter are underweight and nearly one-third have undiagnosed hyper­tension. Nearly 60 percent live in dwellings lacking access to an improved sewer system. The majority of households use poor-quality cooking fuel, and the resulting smoke produced contributes to indoor air pollution and tends to have a particularly negative impact on older persons who spend more time indoors.

Living Arrangements and Social Support: More than four in five older Indians live in multigenerational households with their children. But surveys find that the share of older Indians living with only a spouse or alone doubled between the early 1990s and the mid-2000s. A number of trends may explain these changes in living arrangements, including declining fertility leaving fewer chil­dren available to care for older parents, rural-to-urban migra­tion for employment that separates families, and changing social expectations regarding intrafamily obligations.

Work, Retirement, and Income Security: Despite India’s recent rapid economic growth, the majority of older Indians remain poor. Less than 11 percent of them have a pension of any sort, according to national surveys. Saving is diffi­cult or impossible for a majority of Indians because earnings are low, some economic activity in the informal sector does not involve currency exchange, and a large share of the aging population lives in a rural area where banking is unavailable. With little old-age income support and few savings, labor force participation remains high among those ages 60 and older, particularly among rural Indians. Evidence suggests that not only does a large share of the elderly earn income, they also support their adult children who often live in homes and work on farms owned by their parents.