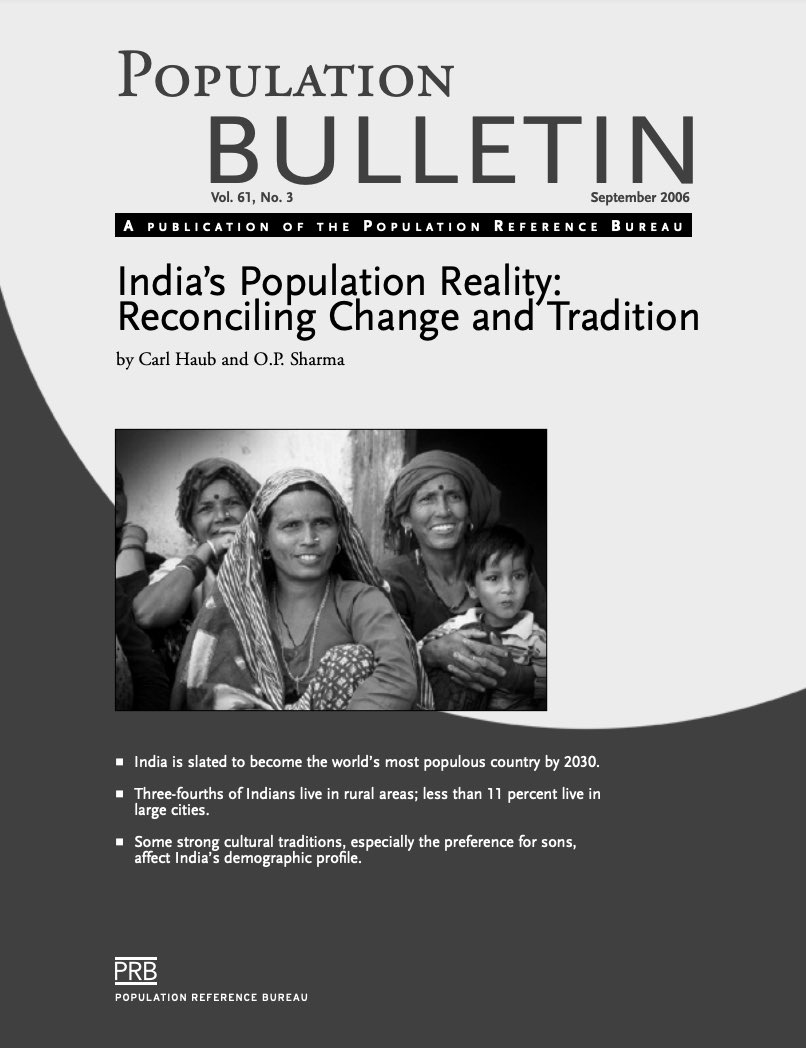 (September 2006) This Population Bulletin presents a demographic portrait of the diverse country of India in the early years of the 21st century and offers insight into some of the forces driving continued growth and change.

India is often described as a collection of many countries held together by a common destiny and a successful democracy. Its diverse ethnic, linguistic, geographic, religious, and demographic features reflect its rich history and shape its present and future. It is also only the second country to achieve a population of 1 billion. While it is an emerging economic power, life remains largely rooted in its villages. Only a small fraction of Indians benefit from the country’s expanding industrial and information sectors. And, although Indians are having fewer children, the desire to have at least one son has led some couples to sex-selective abortion, distorting the ratio of boys to girls in selected Indian regions.

The diversity embraced by this enormous country, and the tension between tradition and change, are evident in India’s demography. Fertility decline has played a crucial role in slowing population growth in India, but there are wide disparities in birth rates between the northern and southern states. Northern states are characterized by high birth rates, abject poverty, poor health, and widespread illiteracy. In southern states, living conditions and educational levels are higher and birth rates are lower. Fertility is below the two-child replacement level in two southern states, Kerala and Tamil Nadu, and life expectancy at birth is above 65 years. In some northern states, such as Bihar and Uttar Pradesh, women have at least four children, on average, and life expectancy around 60 years. Fertility is also markedly higher and life expectancy lower in rural than in urban areas. Change has been painfully slow in the villages that are the center life for most Indians.

India has more people than Europe, more than Africa, more than the entire Western Hemisphere. Authors Carl Haub and O.P. Sharma note that India’s population will exceed that of China before 2030 to become the world’s most populous country, a distinction it will almost certainly never lose.