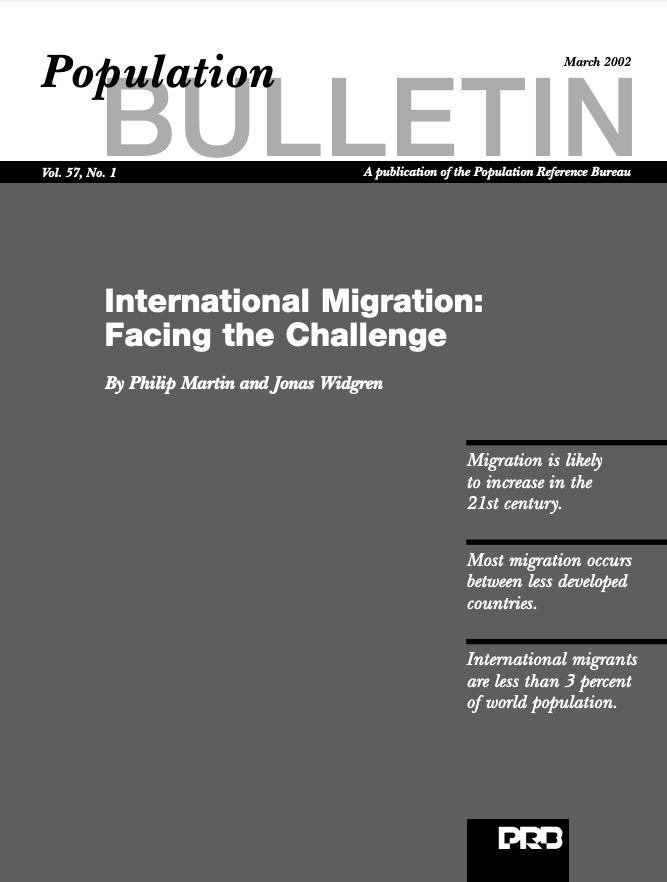 (March 2002) International migration—people moving across national borders—is a global challenge for the 21st century. More than 190 nation-states issue their own passports and visas and regulate who can cross their borders and stay. At least 160 million people were living outside their country of birth or citizenship in 2000, up from an estimated 120 million in 1990. If the world’s migrants were in one place, they would create the world’s sixth most populous country (after China, India, the United States, Indonesia, and Brazil).

Most of the world’s 6.1 billion people never cross a national border—they will live and die near their place of birth. Most people who do cross national borders will move only a short distance to nearby countries. But more than 80 percent of the world’s population live in less developed countries, and most international migrants move from one less developed nation to another. Still, at least 40 percent of the world’s international migrants live in a handful of industrialized countries, including the United States, and their presence raises major socioeconomic issues in the countries of origin and countries of destination. This Population Bulletin explains why people cross national borders, why such migration is often controversial, and how migration can be managed more effectively in the 21st century. International migration is examined within the major world regions—North and South America, Europe, Asia and the Middle East, Africa, and Oceania.

Philip Martin is professor of agricultural economics at the University of California–Davis, chair of the University of California’s Comparative Immigration and Integration Program, and editor of Migration News, a monthly summary of current migration developments. Jonas Widgren is the director of the International Center for Migration Policy Development in Vienna, which coordinates immigration policy research for 20 European countries.