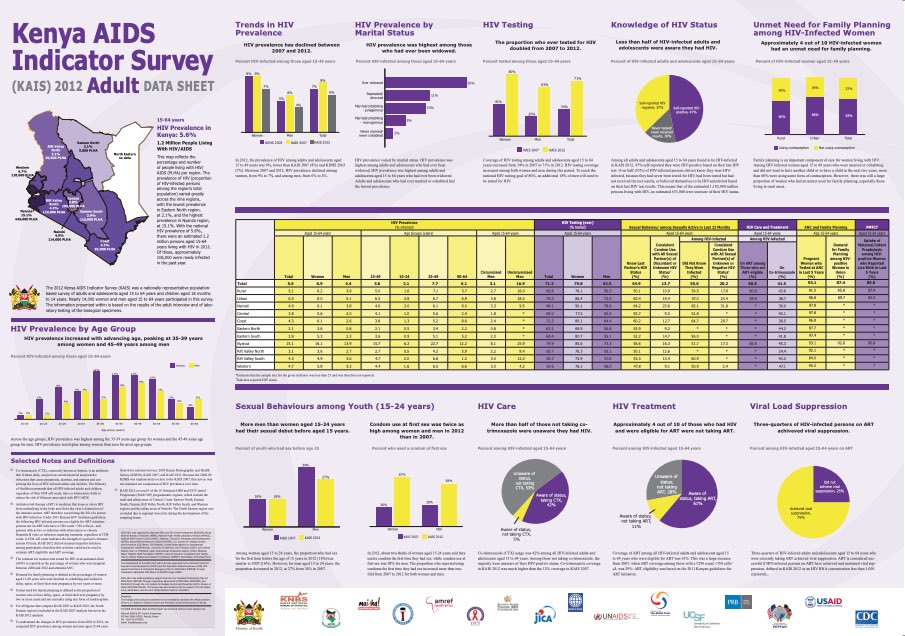 (August 2014) The 2012 Kenya AIDS Indicator Survey (KAIS) was a nationally representative population-based survey of adults and adolescents ages 15 to 64 and children ages 18 months to 14 years. Nearly 14,000 women and men ages 15 to 64 years participated in this survey. The information presented in this data sheet is based on the results of the adult interviews and of laboratory testing of the biological specimens.

The prevalence of HIV (proportion of HIV-infected persons among the region’s total population) varied greatly across the nine regions, with the lowest prevalence in Eastern North region, at 2.1 percent, and the highest prevalence in Nyanza region, at 15.1 percent. With the national HIV prevalence of 5.6 percent, there were an estimated 1.2 million persons ages 15 to 64 living with HIV in 2012. Of these, approximately 106,000 were newly infected in the past year.

The development of the KAIS 2012 wall chart was supported by the National Council for Population and Development (NCPD) and the Population Reference Bureau (PRB) with support from the U.S. President’s Emergency Plan for AIDS Relief (PEPFAR) through Cooperative Agreement AID-0AA-A-10-00009 through USAID.

KAIS 2012 was made possible by support from the U.S. President’s Emergency Plan for AIDS Relief (PEPFAR) through cooperative agreements [#PS001805, GH000069, and PS001814] through the U.S. Centers for Disease Control and Prevention (CDC), Division of Global HIV/AIDS (DGHA). This survey was also funded in part by support from the Global Fund, World Bank, and the Joint United Nations Team for HIV/AIDS.