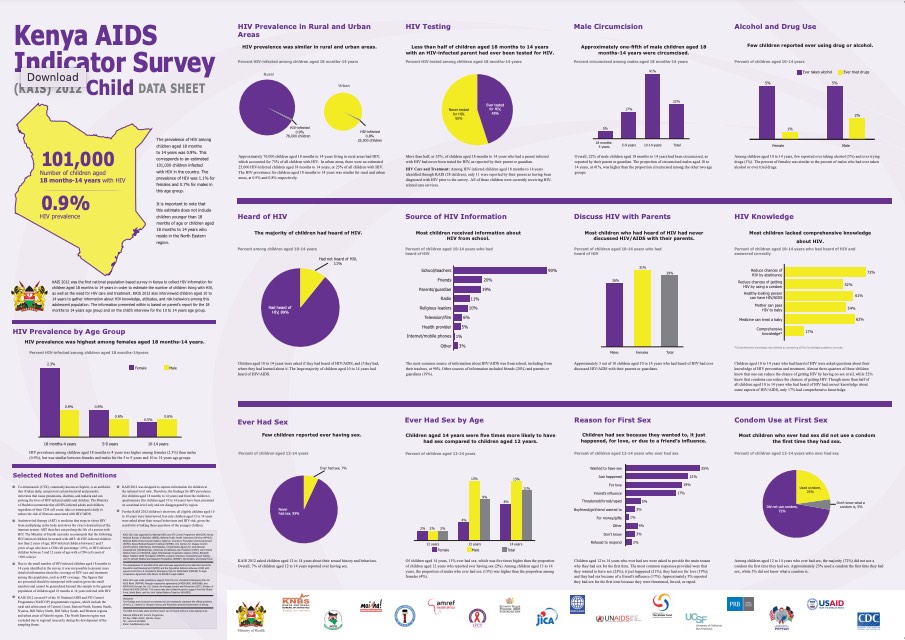 (August 2014) The Kenya AIDS Indicator Survey (KAIS) 2012 was the first national population-based survey in Kenya to collect HIV information for children ages 18 months to 14 years in order to estimate the number of children living with HIV, as well as the need for HIV care and treatment. KAIS 2012 also interviewed children ages 10 to 14 to gather information about HIV knowledge, attitudes, and risk behaviors among this adolescent population. The information presented in this data sheet is based on parent’s report for the 18 months to 14 years age group and on the child’s interview for the 10-to-14 years age group.

KAIS 2012 was made possible by support from the U.S. President’s Emergency Plan for AIDS Relief (PEPFAR) through cooperative agreements [#PS001805, GH000069, and PS001814] through the U.S. Centers for Disease Control and Prevention (CDC), Division of Global HIV/AIDS (DGHA). This survey was also funded in part by support from the Global Fund, World Bank, and the Joint United Nations Team for HIV/AIDS.