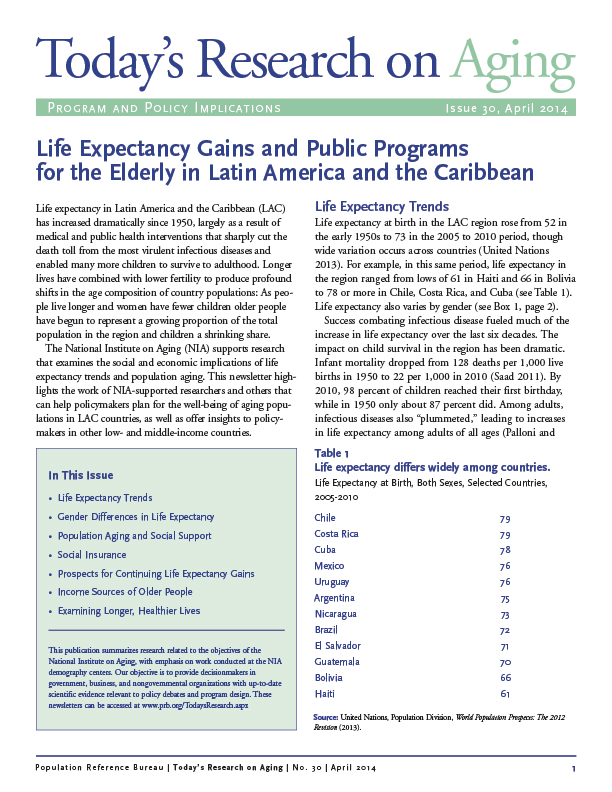 Today’s Research on Aging, Issue 30: Life Expectancy Gains and Public Programs for the Elderly in Latin America and the Caribbean

This issue of Today’s Research on Aging, “Life Expectancy Gains and Public Programs for the Elderly in Latin America and the Caribbean,” examines new research on these population trends and their implications. Life expectancy in Latin America and the Caribbean (LAC) has increased dramatically since 1950, largely as a result of medical and public health interventions that sharply cut the death toll from the most virulent infectious diseases and enabled many more children to survive to adulthood. Longer lives have combined with lower fertility to produce profound shifts in the age composition of country populations: As people live longer and women have fewer children, older people have begun to represent a growing proportion of the total population in the region and children a shrinking share.

While the elderly population is rising steadily in relation to other age groups, countries are at different stages in the aging process. Population aging is quite advanced in Cuba, Argentina, and Uruguay, where the elderly ages 65 and older already represent 10 percent or more of the population (see interactive map below, Percent of Population 65+). A majority of countries in the region will see the share of the 65-and-older population reach at least 10 percent by 2030, but the pace of aging varies. For example, in Colombia and Costa Rica, the proportions of the population ages 65 and older are projected to more than double, to roughly 12 percent and 14 percent, respectively, between 2010 and 2030. By contrast, the 65-and-older population in countries such as Haiti, Bolivia, and Guatemala will still be less than 7 percent by 2030.

Implications for Programs for the Elderly

As longer life expectancies fuel increases in the older populations in LAC countries, some analysts question whether government funds for social programs for the elderly (economic support, pensions, and health care) can keep pace. Such analysts raise concerns about levels of per capita income in LAC countries as these populations are aging. The majority of North American and western European countries experienced a much slower pace of population aging and had higher per capita incomes than LAC countries experiencing population aging now. High-income countries such as France and Sweden had 115 years and 85 years, respectively, to adjust as the proportion of older adults doubled from 7 percent to 14 percent, but countries such as Brazil and Chile will experience a similar shift in about 20 years.

Researchers working with the National Transfer Accounts (NTA) project—analyzing the flow of economic resources among age groups—have identified social and economic policies that could buffer the negative impact of population aging in LAC countries. These researchers emphasize the economic implications of shifts in the age composition of populations, arguing that most LAC countries have a “window of opportunity for accelerated economic growth” created by declines in fertility. Because birth rates have fallen over a period of time, the size of the young dependent population in many countries in relation to the size of the working-age population is smaller than it has been in the past (see interactive map, Age Dependency Ratios). With fewer young people to support and several more years before these countries face a rapid increase in the dependent older population, these demographic shifts may enable many LAC countries to reap economic benefits—known as a demographic dividend—if appropriate policies and investments are put in place. Recommendations based on NTA project data analysis include strengthening banking systems to increase personal retirement savings and pension reforms that raise the retirement age. They also recommend that governments invest in the health and education of children to ensure that the smaller labor force of the future is more productive.

A growing body of research suggests that the health impact of tobacco use, deprivation in childhood, and the related trends of obesity and diabetes will likely slow improvements in longevity in the region. Public health initiatives to prevent smoking, promote physical activity, and encourage healthier diets can play a role in efforts to improve the health of the older population and may be the key to sustaining or even building on the gains in life expectancy observed over the past decades. Paola Scommegna is a senior writer/editor at the Population Reference Bureau. Marlene Lee is program director, Academic Research and Relations, at PRB.