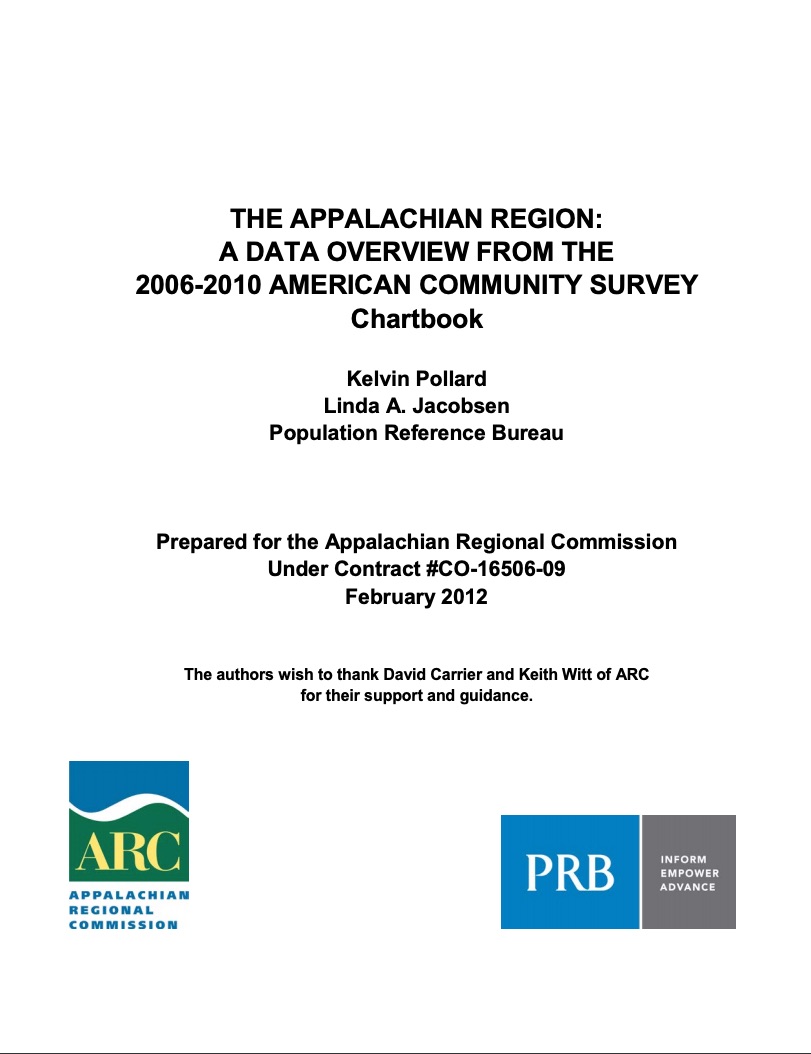 The Appalachian Region: A Data Overview From the 2006-2010 American Community Survey

In 218 of 420 Appalachian counties, the share of working-age adults (ages 25 to 64) with at least a bachelor’s degree failed to reach more than half the national average of 30 percent, according to The Appalachian Region: A Data Overview From the 2006-2010 American Community Survey, a 2012 Appalachian Regional Commission report prepared by the Population Reference Bureau.

“This is a striking indicator of the lower educational level of the Appalachian workforce,” said Kelvin Pollard, PRB senior demographer and co-author of the report. Just 13 percent of working-age adults in central Appalachia (which includes counties in eastern Kentucky, southwestern West Virginia, and western Virginia) had at least a bachelor’s degree, as did only 15 percent of residents of rural Appalachian counties that were not adjacent to metro areas.

The report finds that overall only 23 percent of the working-age population in the Appalachian region had a bachelor’s degree or more—7 percentage points lower than the U.S. average (see figure). (The Appalachian region encompasses 205,000 square miles along the spine of the Appalachian Mountains from southern New York to northern Mississippi, including portions of 12 states and all of West Virginia.)

Although unemployment in the region among working-age adults was only slightly higher than the national average of 6.4 percent during the period, it was at least 10 percent in 36 counties. All but two of these counties were outside metropolitan areas, and nearly half were in central Appalachia. “We see indications of a connection between unemployment and educational attainment,” noted Pollard. “In 25 of the 36 Appalachian counties with double-digit unemployment, more than one in five working-age adults lacked a high school diploma.”

Additionally, the report found that in most of the counties with labor force participation rates matching or exceeding the U.S. average, the share of working-age adults with at least a high school diploma was also at or above the national average. Pollard noted that unemployment during the 2006 to 2010 period reflects not just patterns during the 2007 to 2009 economic downturn and post-recession recovery, but also patterns during the years of prerecession economic growth.

There is some good news. The data suggest positive trends in educational attainment, with slight increases in the shares of the population ages 25 and older with a high school diploma and a bachelor’s degree in the 2006 to 2010 period. “The trend toward high school and college completion among young adults is likely continuing,” noted Linda Jacobsen, report co-author and vice-president of Domestic Programs at PRB.

The report examined a variety of social and economic indicators. Other key findings include: