This article is a summary of a longer article by Monica Das Gupta, “Population, Poverty, and Climate Change,” World Bank Research Observer 29, no. 1 (2014): 83-108. All citations are included there.

(April 2015) The global problem of climate change poses the greatest threat to the least developed countries even though they have contributed relatively little to the current stock of emissions causing the problem.

Food production will be a key issue for the least developed countries. The World Bank estimates that to meet the growing demand for food between 2005 and 2055, agricultural productivity will need to rise by about a third to accommodate population growth, by another third to meet rising consumption per capita, and by a further 80 percent to offset the projected stresses arising from climate change (see figure). 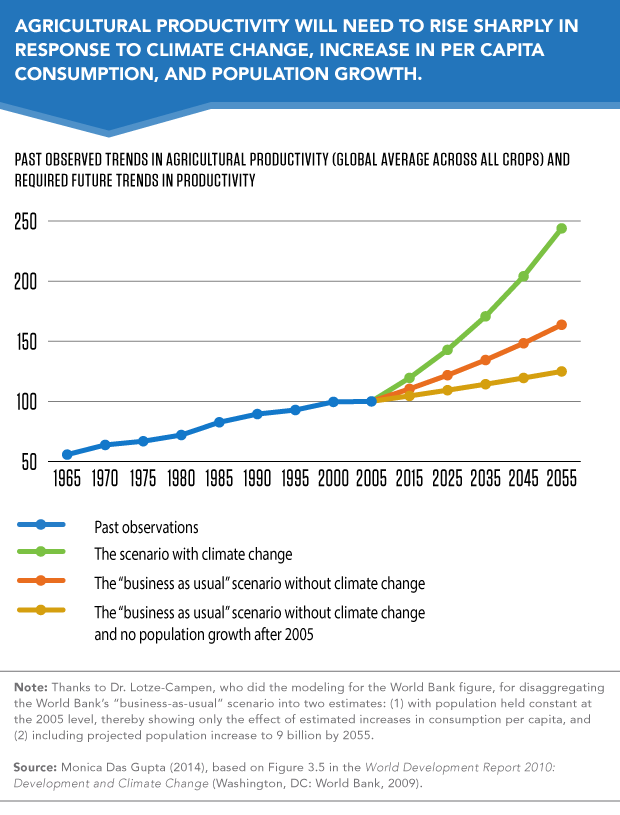 The least developed countries have limited climate change mitigation options. However, reducing fertility through family planning can help in the following ways:

Lower fertility also increases per capita resources to invest in the human and physical capital needed for economic growth and poverty reduction. By extension, lower fertility also reduces pressure on jobs and livelihoods. Levels of youth unemployment are already high in much of sub-Saharan Africa, and the United Nations estimates that their youth population will rise sharply for decades. The World Bank estimates that available cropland per agricultural person has decreased sharply. Economic growth expands resources for coping with climate change, and better livelihoods will help people avoid vulnerable ecological niches.

Studies from both developed and developing countries show that increasing access to contraceptive services helps to lower fertility, and benefits women and their households in many ways. Such services most benefit women who are poor and uneducated, and their children’s schooling and health.