(June 2010) In eastern Democratic Republic of Congo (DRC), HEAL Africa provides free health and psychosocial services to survivors of gender-based violence. Jeanne Muliri Kabekatyo (“Mama Muliri”) pioneered and leads Heal My People, HEAL Africa’s strategic response to gender-based violence. Since the start of the program in 2003, Heal My People has worked with over 30,000 women in the DRC, providing much-needed support in areas affected by conflict. Muliri visited PRB recently to talk about her efforts to eradicate gender-based violence, her involvement in the economic empowerment of women, and the importance of holistic community development. The event was hosted by the Gender-Based Violence Task Force of the Interagency Gender Working Group (IGWG) and funded by USAID.

Mama Muliri opened her presentation by recounting her experience with Joy, a young woman whose story is just one among the many difficult cases she sees every day. Joy married her husband at 17 and soon became pregnant. They lived in a remote village where the health care infrastructure had been destroyed by war. Midwives with little training assisted the delivery of her child, but despite their presence, the child was stillborn. Joy did not deliver the placenta and realizing that something was wrong, the local men organized a group to transport her to the nearest health center. Soon into their journey, they encountered a group of armed soldiers. The men from the village were frightened and fled, leaving the young woman on the side of the road by herself. The soldiers raped her and left her to die. When the men from the village returned from their hiding places, they found Joy unconscious. The men continued their journey and reached the hospital. The young woman’s condition was so serious that the hospital could not help her and they referred her to HEAL Africa’s hospital in the provincial capital, Goma. There, specialists were able to save her life. She was recovering well physically; however, mentally she had given up on life. She was concerned that her village would not take her back and she worried that her husband and family would reject her after what had happened. She was ashamed and did not want to live a life isolated from her community. Mama Muliri stepped in to help. She visited the village and started a dialogue with people in the community. The village had a Nehemiah Committee, another HEAL Africa initiative, that had already received training in village sensitization. They had been involved in family mediation, and Mama Muliri realized that the village recognized that Joy wasn’t to blame for what had happened to her and should not be stigmatized. Not only did her family not blame Joy for what happened, they felt ashamed for not protecting her from violence and asked for her forgiveness. 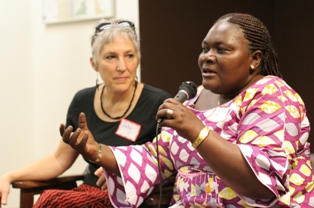 Judy Anderson (left) and Mama Muliri (right) of HEAL Africa discuss their work to reach out to victims of gender-based violence in DRC at an event at PRB.
Photo: Eric Zuehlke/PRB.

Reaching Out to Survivors

HEAL Africa works with survivors of gender-based violence and fights against their isolation. Partnering with over 60 local health centers, HEAL Africa is able to reach people in need with emergency medical and support services within 48 hours of an emergency or crisis. At its main hospital, the organization offers testing for HIV/AIDS and other diseases, psychosocial counseling services, as well as medical and surgical care, most notably repair of obstetric fistulas.1 The ultimate goal of the support program is to heal women and encourage their reintegration and acceptance in the local community through training and education. Beyond essential medical care, the focus is on helping women regain their independence and confidence after being affected by gender-based violence.

HEAL Africa’s community programs empower women to work together and fight the stigma associated with living as a survivor of gender-based violence. Women are taught that they have the power and the voice to affect society and that together they can change attitudes in their community. By themselves, they would be mostly ignored, but if the public understands that women’s well-being affects the community collectively, then they will be more responsive to change.

Economic empowerment is an essential step toward independence. HEAL Africa organizes savings and loan programs that allow participation by all women, not just those personally affected by violence. These microcredit groups provide small individual loans to women’s groups, which then divide the amounts among their members based on individual proposals submitted by the candidates. Loans range from $50 to $200 and are given for six months with a small interest rate. Such short loan periods ensure that the funds circulate in a region without banks. During the first six months of the program, the loan repayment rate was 98 percent. Women recognize that this is a tremendous opportunity to develop their economic skills, while helping to support their families.

For the maximum effectiveness of its initiatives, HEAL Africa involves traditional tribal chiefs, religious and political leaders, and the local community in its healing curriculum. In groups, they discuss proverbs, tradition, customs, and the laws, starting points to a dialogue about awareness of gender-based violence. The organization believes that laws alone will not bring long-term change; therefore, the goal is for the law to reflect the collective will of the community while providing legal backing for punishing perpetrators. Laws are put to the test at the local level, and if people do not believe in a rule, they will not comply with it in their community. Partnering with the American Bar Association, HEAL Africa’s Legal Clinic offers legal assistance to survivors. By providing women legal services at the hospital, prosecution of perpetrators in 2008 had increased from 12 to 140.2 In addition, HEAL Africa reaches out to political leaders and lobbies to discourage corruption and eliminate impunity.

After her presentation, Mama Muliri sat down with PRB to answer a few questions about her work.

PRB: Can you share your personal story? How did you get involved in your work?

Muliri: I’ve always had something in my heart for women. I grew up the oldest of 10 children. There were seven girls and three boys. It just grated me when my parents expected the girls to do things for the boys and, as I grew up, that always stayed in my heart that this wasn’t right. I was aware of the inequality based on gender. When I grew up, I started working with women through the churches. When I was 20, 21, 22, I was very committed and active working for women through the churches. Up to today, I’ve been very involved in women’s issues and being a voice for women through the churches. The churches have trusted me. In our African culture, there is an aspect where the strength of women has been minimized and I was against that. I wanted to show women that they are capable of doing something. After that, in 2003, I started working with HEAL Africa working with women who were survivors of sexual violence. As I already had a heart for women, as I already knew the problems women faced, the fact that I knew so much about women’s situations and then this opportunity to work with HEAL Africa to develop a program to help women, it was like coming home.

PRB: In your experience, what is the key to bringing people together in dialogue who otherwise might not talk to each other?

PRB: How do you measure success? How do you know when something is successful and have you tried any approaches that haven’t worked?

Muliri: How I know whether or not something has been successful is what I hear from people. I listen to the population. Through oral surveys, people tell me their experiences and point to specific practical examples of what has changed. We also do KAP studies (Knowledge, Attitudes, Practice) before we start working somewhere to identify the problem and see the behavior patterns of people. After a year of work, we do verifications with interviews related to the same questions—a follow-up survey—which is written and reported.

Kata Fustos is a communications intern, and Eric Zuehlke is an editor at the Population Reference Bureau.