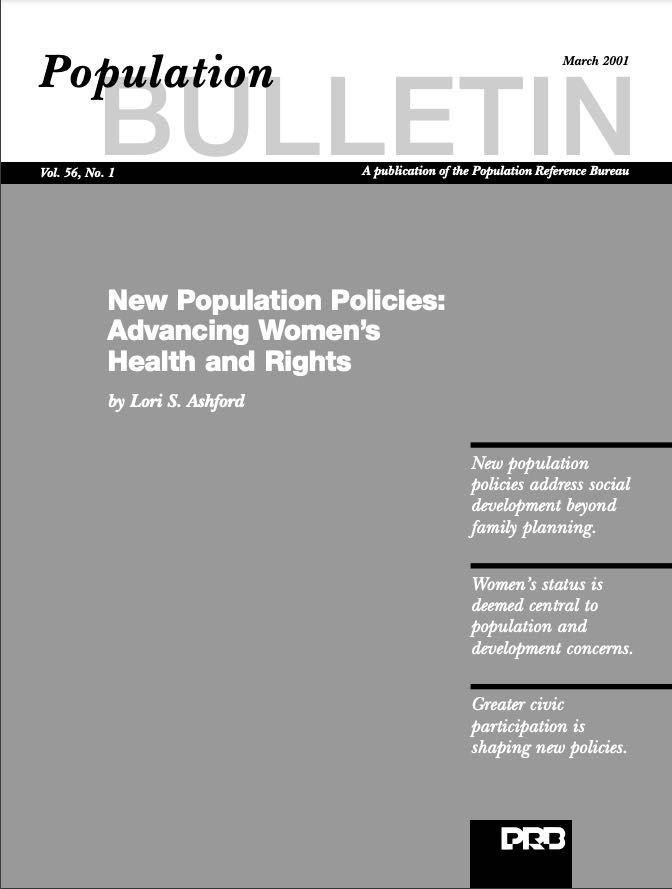 (March 2001) Policies that address population issues touch on the most sensitive aspects of people’s lives: sexuality, childbearing, and family relationships. Seeking an international consensus on population policies has often been a contentious process. The early 1990s marked a dramatic departure from conventional ideas about how governments should try to influence the size and well-being of the societies they govern, and brought an unparalleled consensus among national governments about population policy. This new perspective shifted the emphasis of population policies away from slowing population growth to improving the lives of individuals, particularly women. The policies spawned by this consensus continue to evolve.

The old focus on restraining population growth grew out of widespread concern that the unprecedented pace and volume of population growth after 1950 was a serious threat to economic development, public health, and the environment. Many governments supported family planning programs to reduce their birth rate and slow population growth. But national policies intent on “population control” met with increasing resistance and diminishing support by the mid- 1990s. Women’s health advocates in particular saw (and still see) these policies as infringing on women’s basic rights to decide whether and when to have children.

A turning point in international discussions on population was the 1994 International Conference on Population and Development (ICPD), held in Cairo. The Cairo conference enlarged the scope of earlier population policies: Governments agreed that population policies should address social development beyond family planning, especially the advancement of women, and that family planning should be provided in the context of reproductive health care. This care includes ensuring healthy and safe childbearing; preventing sexually transmitted infections, including HIV/AIDS; and addressing other factors that contribute to poor health, such as sexual trafficking and violence against women. Underlying this new emphasis was a belief that enhancing individual health and rights would ultimately lower fertility and slow population growth.

Many countries have attempted to implement the recommendations of the Cairo conference, although progress has been uneven. In many low-income countries, addressing such a wide range of health and social concerns requires greater resources and organizational capacity than are currently available. Also, funding from donor agencies to support these changes has fallen below expectations. In spite of these obstacles, a large number of countries have redefined policy and program objectives and adopted approaches that aim to meet individual needs rather than national demographic goals. The world’s two most populous countries, India and China, embarked on new initiatives that reoriented their national family planning programs in the second half of the 1990s.

Debates continue about the importance of controlling population growth and whether the entire Cairo agenda is feasible. Because large numbers of young people are in or approaching their childbearing ages, world population will continue to grow well into the 21st century. Governments may differ in their thinking about whether and how to curb population growth, but a broad international consensus exists—along with a well-organized advocacy community—that calls for population policies that protect and enhance individual rights.

This Population Bulletin reviews the evolution of national population policies, particularly following the historic 1994 Cairo conference. It describes the new focus on improving reproductive health and women’s rights and how governments have tried to incorporate this new approach in their policies and programs. The Bulletin also looks at possible new directions for population policies.

Lori S. Ashford is a senior policy analyst at the Population Reference Bureau.