Noncommunicable Diseases in Latin America and the Caribbean: Youth Are Key to Prevention 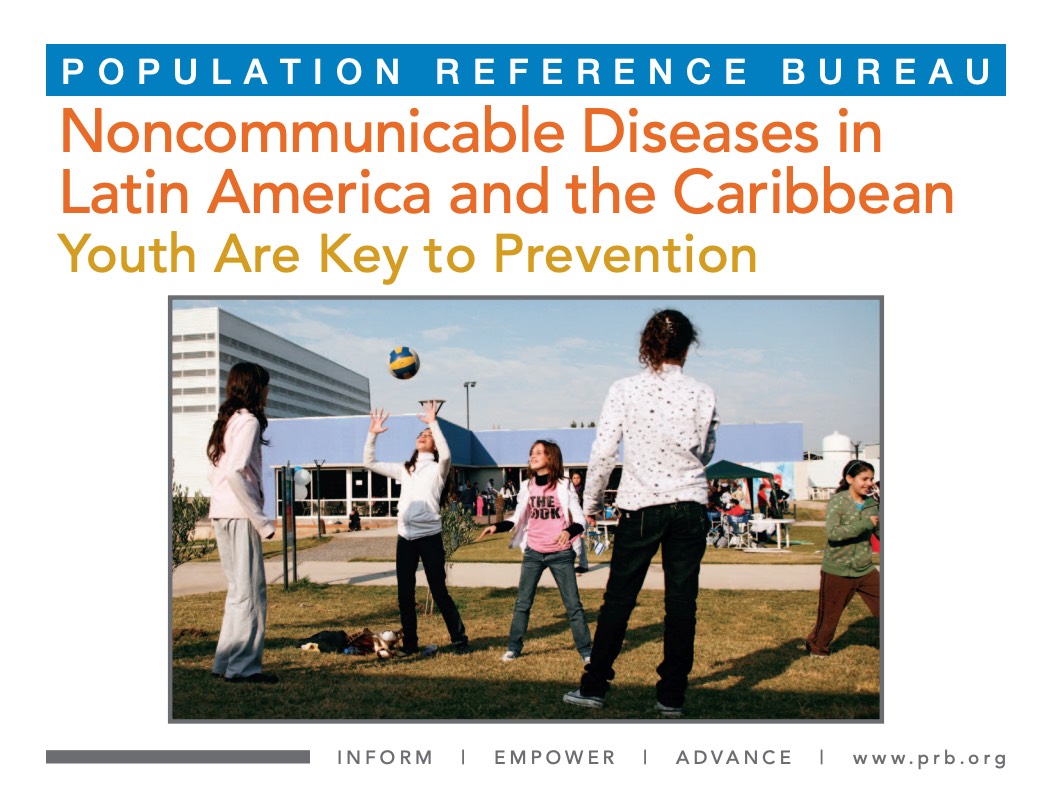 Data Sheet. Noncommunicable Diseases in Latin America and the Caribbean: Youth Are Key to Prevention

This PRB data sheet, created as part of PRB’s IDEA project (funded by USAID), and in partnership with PAHO, provides a wealth of data for selected countries in Latin America and the Caribbean that document the prevalence of noncommunicable diseases, especially among the region’s youth.

The four major NCDs—cardiovascular disease, most cancers, diabetes, and chronic respiratory diseases—will account for approximately 81 percent of deaths in Latin America and the Caribbean by 2030, and 89 percent of all deaths in high-income countries.

This data sheet includes a “dashboard,” which rates selected countries in North America, Central America, Latin America, and the Caribbean on four indicators: tobacco use, alcohol use, physical inactivity, and overweight/obesity. Each country is given a rating of high risk, medium risk, or low risk for each of the four indicators as they apply to youth ages 10 to 24. Countries were selected based on the availability of data on the four factors.

The data sheet highlights these indicators:

Key findings from the data sheet include:

Premature Deaths From Noncommunicable Diseases in Latin America and the Caribbean. NCD-related deaths occur at earlier ages in low- and middle-income countries than in high-income countries. In Latin America and the Caribbean, men, in particular, face premature death due to NCDs, although women are increasingly facing premature death from NCDs as well. Typically, people under age 60 are living their most healthy and productive years. But those with NCDs face years of disability that hurt their families and the country’s economy.

Trends in Prevalence of Overweight and Obesity. The Americas have the world’s highest prevalence of overweight and obesity, which is a leading risk factor for NCDs, especially diabetes. This overweight and obesity epidemic is largely due to an increasing trend toward unhealthy diets consisting of highly processed foods high in fat and sugar, and few fruits and vegetables. As the region became more urbanized, a more sedentary lifestyle has also contributed to the epidemic. But some countries in the region, such as Haiti and Guatemala, still face an issue of persistent malnutrition, especially among children, while simultaneously experiencing growth in overweight and obesity in the overall population.

Changes in Smoking Prevalence. A number of countries throughout the LAC region have lowered the prevalence of cigarette smoking among adolescents and youth through tax increases and public health campaigns. Use of other tobacco products has, however, either shown no signs of decline or has even increased in some countries in the region, as shown in the examples from the Caribbean.

Gender Differences in Smoking. Compared to girls, boys are more likely to smoke tobacco products, including cigarettes, in most countries in the LAC region. But girls are starting to catch up in some countries, for example in Argentina and Uruguay. The LAC region has the smallest gender gap in adult smoking rates of all world regions, and the gap will narrow even more if the trend continues. Increased rates of smoking among girls today will result in higher illness and death from smoking-related diseases among women in coming decades.

Differences in Smoking: Capital Cities and National Averages. Smoking is a major risk factor for many cancers, chronic respiratory diseases, and heart disease, and it is clearly more prevalent in the region’s capital cities. In the LAC region as a whole, four out of five adolescents already live in urban areas, and the risks for NCDs rise with urban living.

The Population of Latin America and the Caribbean. Although fertility has decreased in much of Latin America and the Caribbean to nearly replacement level (average of 2.1 children per woman), 45 percent of the LAC region’s population is under age 25. Young people are an important population to consider in NCD prevention efforts to instill healthy habits that can be maintained throughout their lives. 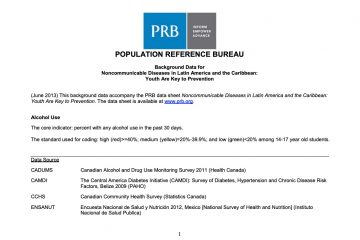 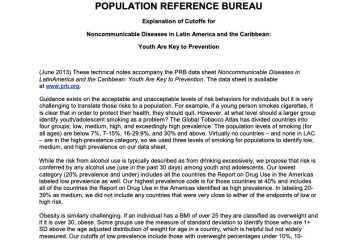 Data Sheet Explanation of Cut-Offs: Noncommunicable Diseases in Latin America and the Caribbean 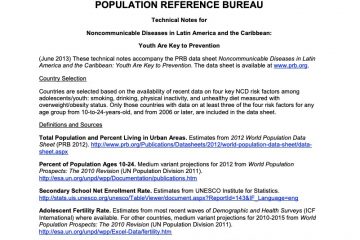